This Saturday, May 15, the Palestinians commemorated the 73rd anniversary of the Nakba, "the catastrophe". In 1948, when the State of Israel was established, 700,000 Palestinians were driven from their te ... 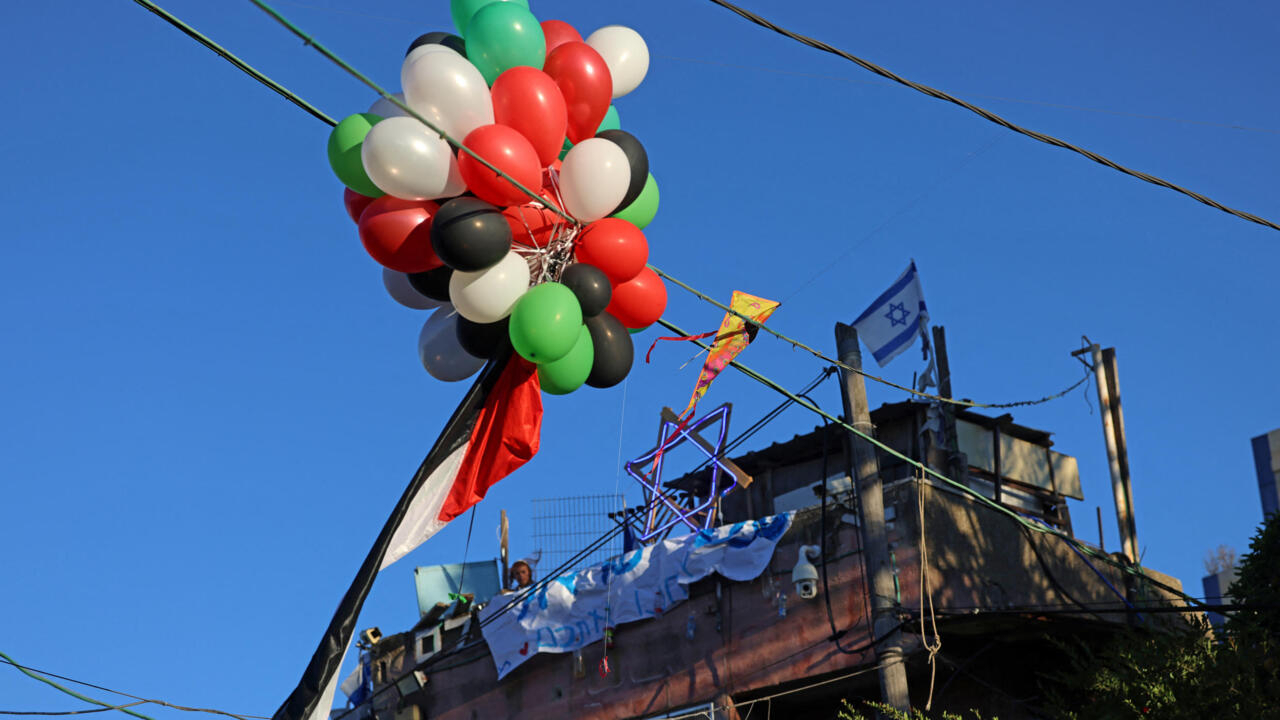 A Palestinian flag attached to balloons installed in front of an Israeli settler house in the Sheikh Jarrah neighborhood of East Jerusalem, where impending evictions of Palestinian families have fueled anger on May 15, 2021, the day Palestinians celebrate the 73rd birthday of the Nakba, the "catastrophe" of the creation of Israel in 1948. AFP - EMMANUEL DUNAND

This Saturday, May 15, the Palestinians commemorated the 73rd anniversary of the Nakba, "

In 1948, when the State of Israel was established, 700,000 Palestinians were driven from their lands.

This forced exodus is still very present in Palestinian collective memory, and it takes on a particular resonance with current events.

Commemorations were held in Jerusalem and in particular in the neighborhood of Sheikh Jarrah, where Palestinian families risk eviction for the benefit of Israeli settlers.

It's a sober ceremony.

All afternoon, young people painted frescoes on the walls, the map of historic Palestine.

We will not leave

Alaa is a resident of this

, which has become in recent weeks the emblem of Palestinian resistance to the occupation.

We won't allow a second

We must protect our country, our land, our homes.

We will liberate Palestine!

Palestinians everywhere are rising up.

The injustice we have suffered for 73 years has lasted too long.

This day of remembrance is the symbol of our resistance and our strength.

"We will continue the fight, despite the repression"

Mohamed, 20, is from Jerusalem, but he lives in a different neighborhood.

It is to Sheikh Jarrah in solidarity: “

Many Israeli officials believe that our young generation is not concerned by the Palestinian question.

They say to themselves: these young people did not know anything about the events of the past.

They are wrong, we will continue the fight, despite the repression

On this anniversary of the Nakba, the young Palestinians planned to light a flame of remembrance in the Sheikh Jarrah neighborhood, but the Israeli police dispersed their gathering in the early evening.

With a song, with dabke, with a hashtag, throwing stones, throwing rockets, it's a matter of time.

We are the only country to be under occupation, enough is enough!

Do we still want to wait 72 years?

And I'm proud of everyone who leads this fight.

These borders are not here to stay, they will disappear.

Gatherings in support of Palestinians in Europe: thousands of people in Berlin