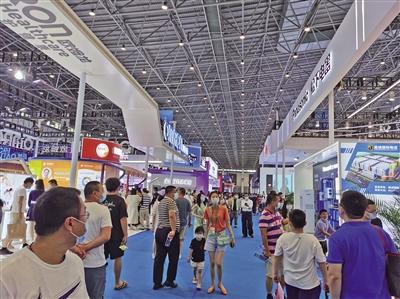 Today is an open day for the public, and all 50,000 tickets have been sold; the specialties of various provinces, regions and cities in exhibition halls 7-8 are popular

Yesterday, many exhibition areas in the exhibition hall of the Consumer Expo ushered in a shopping trend ahead of schedule.

The tailor at the Shanghai Pavilion tailor-made cheongsam to customers on the spot.

The Chongqing Pavilion creates a wall of "Chongqing Taste".

Today is the public open day of the first China International Consumer Goods Fair. At the same time, the Consumer Fair will also close this afternoon.

In the past two days, exhibitors and invited guests have "buy, buy, and buy" in the exhibition hall. The exhibition areas of provinces, cities and autonomous regions in Hall 7-8 have also ushered in a small climax of special product sales.

According to reports, 31 provinces, autonomous regions, municipalities directly under the Central Government and Xinjiang Production and Construction Corps, as well as two separate cities in Xiamen and Dalian, organized separate groups to organize local consumer boutiques and time-honored brands to participate in the exhibition.

According to the Organizing Committee of the Consumer Expo, on the first day of the Expo, the exhibition hall is only open to exhibitors, professional visitors and media holding certificates.

On May 8th and 9th, the organizing committee will appropriately arrange a certain number of free tickets to meet the needs of relevant units in the province and the city and county parks in attracting investment and seeking cooperation, so the number of visitors will be more.

Taking into account the needs of the public, and under the premise of ensuring the business docking needs of exhibitors and professional purchasers, the organizing committee will set May 10 as an open day for the public, and visitors can purchase tickets online in advance.

Tickets for the exhibition on May 10th reflect the principle of non-profit. The price is 20 yuan each, and the number is set at 50,000.

It is reported that starting from May 1st, the ticket sales of the first Consumer Expo's public day (May 10th) started. As of May 5th, all 50,000 tickets have been sold.

Audiences enter the venue with their ID cards, and do not need to show their health codes when entering the hall. After wearing masks and non-sensing temperature, they will swipe their faces to enter.

Yesterday, at a health-care chair booth in the Residence Life exhibition area of ​​Hall 1, more than a dozen health-care chairs were filled by the audience, and there were audiences waiting for the experience.

An elder sister got off the seat and asked, "Sell it?" "Sell, the original price of this seat was 59,800 yuan, and the seat was purchased for 43,000 yuan, and we were responsible for delivering it home." After the staff finished speaking, the eldest sister just took out her mobile phone. Paid.

The jewelry exhibited in the No. 2 Jewelry and Diamond Pavilion also welcomed many visitors to Taobao.

In front of a diamond jewelry booth, a consumer from Shanghai saw a 2.3 carat diamond ring at a price of more than 150,000 yuan.

The person in charge of the booth said, "2-3 carats of diamond rings are most popular with the audience, and several have been sold in the past few days."

The “Chinese Time-honored Brand” Caibai Jewelry has two booths, which represent Beijing in Hall 7 and have independent booths in Hall 2 on behalf of Chinese brands.

According to Yang Na, the person in charge of the Caibai scene, "Sell it?" is the most frequently heard sentence in the past two days.

"The hall 7 mainly exhibits the three royal cultural jewelry series symbolizing the Forbidden City, the Temple of Heaven, and the Summer Palace. The hall 2 exhibits tourmalines, hard gold tea set decorations, ancient gold methods, traditional enamels, pure gold for Lunar New Year, and designer models. , Investment in gold, inlaid jewelry and other commodities.” Yang Na said that this exhibition was mainly based on image display, but the audience has a strong desire to buy. The three royal cultural series jewelry, ancient gold methods, and investment in gold have attracted a large number of Audience, "Like this ancient gold bracelet, it looks more textured than ordinary bracelets and is welcomed by many audiences."

Hall 5 is the fashion life exhibition area, attracting many young audiences. The booths of L'Oréal, Shiseido, Swarovski and other booths are very enthusiastic.

Shiseido’s on-site staff said, “According to the regulations of the Consumer Fair, the booth is limited to 20,000 US dollars for 4 days. We sell in a limited amount every day. Basically, the daily quantity is about 30 bottles, and they are all sold out in one morning.”

The Shanghai Pavilion creates an image exhibition area full of fashion and vitality from the three dimensions of "people, consumption, and city".

The skirt hem of the gown is 7 meters, and a large number of hand embroidery makes the auspicious pattern present a relief-like texture.

The non-genetic inheritor also demonstrated the production of cheongsam disc buttons on the spot. Only tweezers and scissors are needed. A colored wire rod is slowly formed in the hands of Fang Suwen, the fourth-generation inheritor of the dragon and phoenix cheongsam making skills. “Due to the complex production process and rich experience Each of the craftsmen can only make 3 pairs of buckles per day. If you encounter complicated shapes, you can only make one pair per day.” However, the popularity of the audience is not diminished. There are many visitors who ordered on the spot, and the audience let the master量Dimensions.

As one of the "Three Wonders in Tianjin", Gui Faxiang 18th Street Twist invited the first Tianjin time-honored craftsmen and the masters of the twist production workshop to the scene of the Consumer Fair to show exhibitors from all over the world the production methods and unique twists of Tianjin Twist. Hand craftsmanship.

The teacher demonstrated on the spot that he twisted the twist into strips and rolled them with sesame seeds.

"The twisting process of the 18th Street twist is a national intangible cultural heritage. We will only show the twisting today, and it cannot be fried at the scene." The teacher explained to the onlookers while demonstrating it.

The booth of "Shen Yu Rose Wine", which has been in existence for more than 4 years, is not a big one, but there is a constant stream of customers who consult and taste.

The person in charge of the booth said, “Although our brand is new, rose wine itself is a Tianjin specialty that inherits ancient methods. Taking advantage of the first consumer fair, we can also take a look and learn more from domestic and foreign wine and food counterparts. "

The most eye-catching "spicy" food in Chongqing Pavilion

In the Chongqing Pavilion, a whole wall has created a "Chongqing Taste" area, and the big screen on the wall has been rolling out the hot and spicy hot pot.

The Qiaotou hot pot base, Fuling mustard, Jiangxiaobai sorghum wine, and Chen Mahua booth were once surrounded by exhibitors.

Many of the Chongqing exhibitors are local “time-honored brands”, such as the 80-year-old Leng Suan Ling, who brought the “New National Treasures” co-branded with the National Museum, bringing the Shang Dynasty's descendant mother Wuding, the Han Dynasty drumming and rap pottery figurines, Top national treasures such as the blue and white bamboo and stone plum vase with banana pattern in the Ming Dynasty, the three-blessed scroll of Zhengbanqiao Huafeng and the Qingzun made by Qianlong Jiqing and Jincai Haiyanhe are integrated into the design.

The Mulan series of sword hairpins and wooden combs jointly named by Carpenter Tan and Disney are exquisite and chic. As soon as they were placed on the booth, they attracted several antique lovers to place their orders.