For vaccine companies, a relaxation of patent protection would be a disaster. In German government circles, however, this is a risk that must be taken seriously. This is made possible by a dangerous alliance. 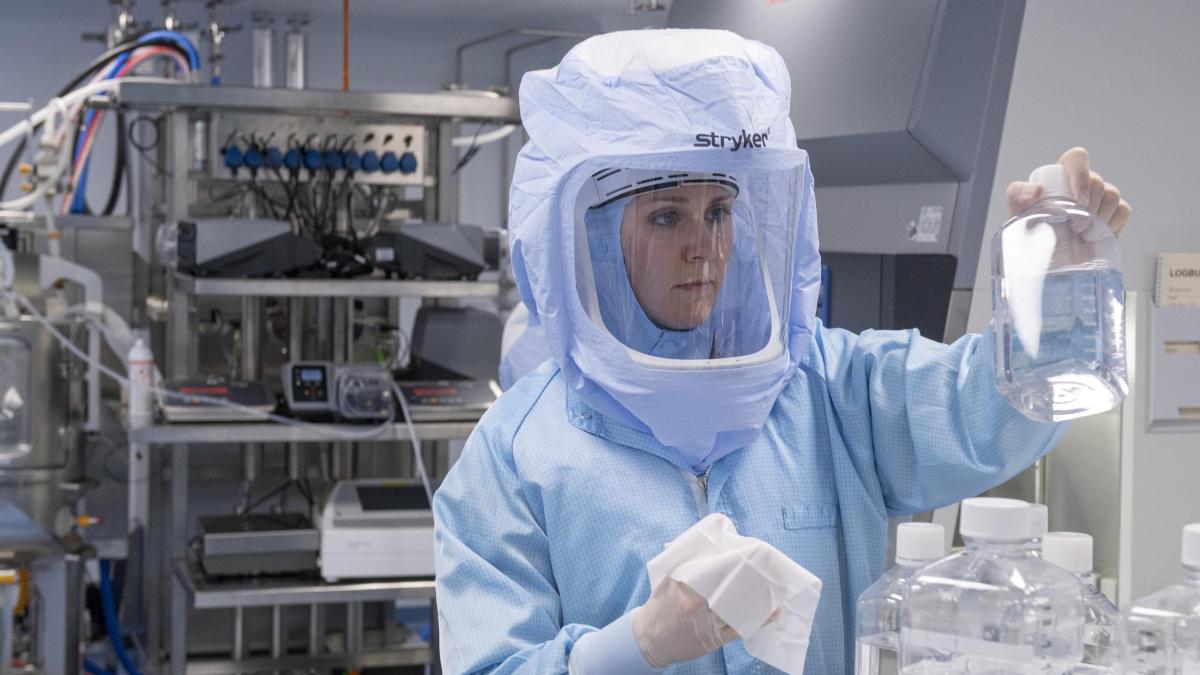 Don't lean on it.

There are strict rules in the Biontech clean room in Marburg.

Nothing must endanger what is continuously being touched there in a machine the size of a closet: the mRNA for the vaccine against corona - and thus one of the most sought-after products in the world.

50,000 process steps are necessary to produce the raw material in the bioreactor, mRNA that has been filtered several times and packaged in the tiniest fat particles.

Only very few companies can do that. Biontech is one of them.

But although the Mainz biotech company is one of the pioneers and although the new production site in Marburg is the cradle of German vaccine production, it took over six months to get the site ready for the task. Half a year. How much longer would it take to set up such a plant in South Africa, India or Brazil? Experts believe: too long, especially for this pandemic.

Nevertheless, the idea of ​​an immediate end to the vaccine shortage through a temporary release of the patents persists.

The biggest supporters so far have included the World Health Organization (WHO) and the governments of South Africa and India, where the virus is particularly raging.

This week there was also prominent support: The USA announced under its new President Joe Biden that it would stand behind this demand.

The US had radically changed the dynamics in the talks.

The stock exchange signals what a patent release would mean for the company. The courses of the corona vaccine manufacturers crashed. The German Curevac was hit hard and soon plans to launch its own mRNA vaccine against corona on the market. The share temporarily lost over 20 percent of its value. Biontech and US competitor Moderna also suffered.

For all three companies, the corona vaccine is the first major product on the market. The breakthrough after years of research. All three have been working on vaccines and drugs based on mRNA technology for around 15 years. Products against the annual influenza are included, but also against HIV and cancer. If the companies were forced to release patents on their corona vaccines, even if only for a limited period, the business model would probably be dead. Especially since there is not only one patent on the corona vaccines. Biontech, for example, has registered around a dozen new patents for the corona vaccine Comirnaty, but at the same time uses its own mRNA platform technology for production.

A revocation of patent protection would be a disaster for these companies: Because competitors who are far from advanced in their research could not only recreate the vaccine with the disclosed knowledge, they would also gain insights into the basic mRNA technology.

The developers' lead would be gone, as would the business model, because they would no longer be able to recoup their enormous investments through exclusive sales of their products.

Which would also make them unattractive for their financiers.

"If states suspend patent protection, they lose a lot in the long term - namely the willingness of private investors to invest in such companies, many years before it is clear whether they are successful or not," warns Matthias Kromayer, who is on the board of MIG- Fund sits and once discovered the Biontech founders Ugur Sahin and Özlem Türeci. An industry would collapse that has only just shown "that it is the only one capable of delivering a sustainable solution to the great medical, economic and social crisis of the pandemic."

The forced release of such patents would cause considerable damage - and at the same time it would not solve the pressing problem of quickly supplying countries like India with vaccines. Because manufacturers have long since expanded their production and are still doing it. In Europe, pretty much everything that is technically capable is now involved in production: Merck supplies raw materials. Sartorius manufactures the bioreactors. Bayer and Wacker Chemie support Curevac, Biontech has brought other competitors on board in addition to its US partner Pfizer, and has vaccination doses filled at Sanofi in Frankfurt, Baxter in Halle and Siegfried in Hameln.

But vaccine production is a difficult business.

If something goes wrong, the entire batch can no longer be used - millions of vaccine doses would be gone.

Manufacturers are accordingly cautiously expanding the quantities of vaccines.

That is the reason why Biontech, for example, is only gradually increasing production in its new Marburg plant - until the goal of one billion vaccine doses per year is achieved.

After all, the end of the vaccine shortage is foreseeable: According to calculations by Unicef, more than 39 billion vaccine doses should be available in 2022, and in the second half of this year it should be 15 billion.

"If it stays that way, the production capacities should then be large enough to vaccinate the entire world population twice," says Rolf Hömke, research spokesman for the pharmaceuticals association vfa.

A forced release of patents - which has never existed in Europe in the past decades - will, however, no longer bring a vaccination box in the short term. German government representatives also point this out. Nevertheless, they fear that the Biden government could end the patent regulations with its policy change. Because in the TRIPS talks of the World Trade Organization (WTO) there has long been negotiations to soften these rules.

So far, important members like the USA have blocked this request. But if the developing countries now join forces with the USA and force one of the rather rare votes, the previous patent rules could fall, people fear in Berlin. Because this does not require a unanimous vote, but a three-quarters majority. For Biontech, Moderna and Curevac this would be a difficult problem to deal with.