Sun visors, air conditioning, heating - technology has so far taken up a lot of space in houses. But now there are signs of a paradigm shift. Because it is possible to build buildings in such a way that they no longer need them. That can even be cheaper than a standard property. 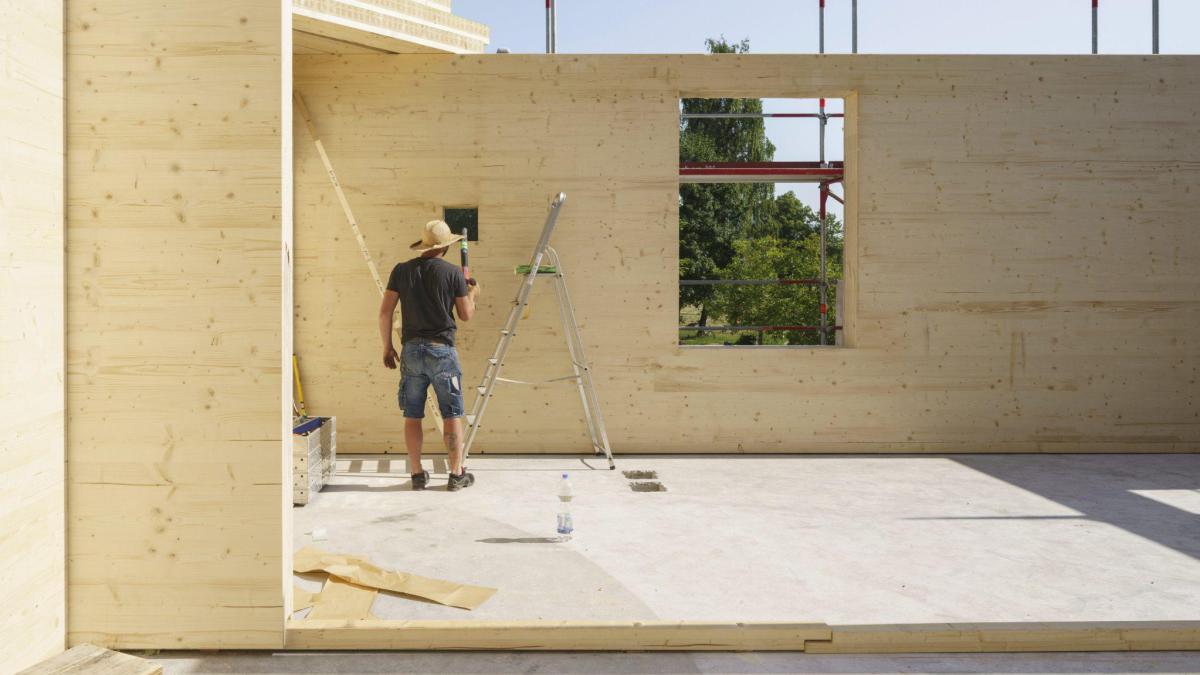 They are houses in which the soul can walk.

They radiate calm with their thick walls, solidity, maybe even dignity.

At least something that was missing in architecture without being able to say exactly what was actually missing.

Now we know: it's the simplicity.

Buildings like the "2226" by Baumschlager Eberle Architects in Lustenau or the design by Florian Nagler for a residential complex in Bayrischzell show that you can easily build without looking cheap.

And at the same time can meet high sustainability standards.

Architecture instead of building services is the architects' approach.

A high level of efficiency should be achieved through the construction itself, not through additional technology.

The most striking feature of the new simplicity: massive walls and high rooms.

It is a bit as if the wheel of Wilhelminian architecture was being reinvented - just without cornices, columns and stucco.

Simple building could become the philosopher's stone in an increasingly complex construction industry.

In any case, the first investors are already showing interest.

In France, a large real estate company wants to build according to the "2226" system - the numbers are intended to indicate that temperatures in the building are always between 22 and 26 degrees.

Building technology takes up a lot of space

In any case, the basis for the new, old type of architecture has been laid, also because the model buildings were meticulously calculated.

Florian Nagler is the current front man of the new easy building movement.

The renowned architect had long propagated constructions that stood for sustainability, but were recently upgraded with more and more expensive technology.

The results, however, made him pensive.

At the ecologically ambitious Schmuttertal high school in Diedorf, which Nagler built together with his colleague Hermann Kaufmann in 2015, almost the entire cellar is filled with building services.

A lot of energy was also used to make them.

But when it was put into operation, the technology only worked 75 percent.

“If the caretaker was sick there, it was heated in summer and cooled in winter.” The wall structures are too complicated.

They consist of up to eleven layers.

This is complicated both during the construction phase and later when it comes to disposal.

In view of the complexity of the building, the users are often overwhelmed anyway.

“At some point I was fed up,” says Nagler, “I didn't want to find another new technical element and a new technical solution for the next technical problem.

Maybe we should concentrate on the architecture itself providing structural solutions. "

But what should a building look like without any automatic ventilation, air conditioning or movable sun visors?

Could it meet the necessary energetic requirements?

In search of answers, Böhm and Nagler teamed up.

Your research project “just build” in Bad Aibling, Bavaria, was presented in 2020.

The outer walls of the houses erected there consist of only one single material, namely wood, insulating concrete or brick.

Each of the three houses, the floor plans are identical, was checked on the computer.

After a total of 2605 individual room simulations, in which the interactions between room height and depth, wall thickness, type and size of the windows and the direction of the compass were compared, ideal dimensions for low energy consumption in winter and moderate temperatures in summer were found: rooms that are 3.30 meters high, three meters wide and six meters deep, as well as windows that are neither too big nor too small and are also arranged flush on the inside.

The outer reveal, around 40 centimeters deep, shades the sunlight so that no additional sun protection is necessary.

The buildings were also designed for at least a hundred-year, changing history of use.

The outer wall is a heat store, but also a retarder.

"The insulation and storage capacity of external walls must be balanced," says Florian Nagler.

The arches above the windows of the concrete and brick versions are visually striking.

Their use gives an almost archaic impression, but has purely constructive reasons.

As monomaterials were used for construction and, in the case of concrete, no steel reinforcement was used, conventional lintels should not be installed; the construction had to be done using masonry technology, i.e. arches.

The outer walls are of different thicknesses.

Concrete construction was by far the most expensive because the material insulating concrete is not yet very popular.

The gain in space through relatively narrow walls and the storage of CO2 in the material speak in favor of timber construction.

Nagler's colleague Baumschlager Eberle Architekten have already answered the question of whether such buildings also make economic sense with a resounding yes.

The construction costs, as they have shown on the basis of their pioneering building in Lustenau, are 25 percent lower than for a standard property.

The energy costs are 67 percent lower and the life cycle costs are half of a standard property over the observation period of 50 years.

The envisaged service life of the building: 200 years.

What that means with the service life becomes clear in a - somewhat striking - comparison made by the entrepreneur Ernst Böhm.

Its B&O group is one of the largest service providers in the German housing industry.

B&O repairs and maintains thousands of buildings every year.

Can you name a building services system that will last longer than 30 years? ”His conclusion is:“ Everything that is left out cannot break. ”

The System 2226 from Baumschlager Eberle does provide for minimal building technology, namely automatic ventilation through the windows.

However, one looks in vain for a heater.

Nevertheless, the rooms always have a temperature of 22 to 26 degrees Celsius.

The thermal mass of the building ensures the necessary temperature stability.

In addition to the sun, devices and lights, the users themselves are responsible for heating.

Everyone constantly radiates 80 watts into their surroundings.

In summer, on the other hand, night ventilation helps prevent overheating.

Compared to the standard office building, a lot of space is gained by omitting technology.

At least in height.

After all, the outer walls are already 76 centimeters thick and cost a lot of space.

There are “no suspended ceilings for air conditioning,” says Yasemin Yalcin-Chauca from 2226 AG.

"This means that the room height of 3.30 meters is fully available to the users."

The architects Baumschlager Eberle market the system through their 2226 AG, which is also supposed to convey the know-how of the construction method to other architects and other investors.

Florian Nagler is also working on spreading the principle: “We want to publish guidelines for this - everything does not have to be reinvented for every project.

We have never had as much response to any of our projects as to 'just build'.

There is a great longing to free the buildings from excessive demands. "