A trillion yuan is coming? This kind of food sold out during the May Day holiday!

A trillion yuan is coming? This kind of food is sold out! Big changes in cooking after 80s and 90s? ! Enterprises have laid out one after another!   The most popular "May Day" holiday in history has just ended. This holiday, with the enthusiasm for traveling, the food delivery industry has ushered in a big explosion.   A report from a certain platform showed that the volume of food delivery from 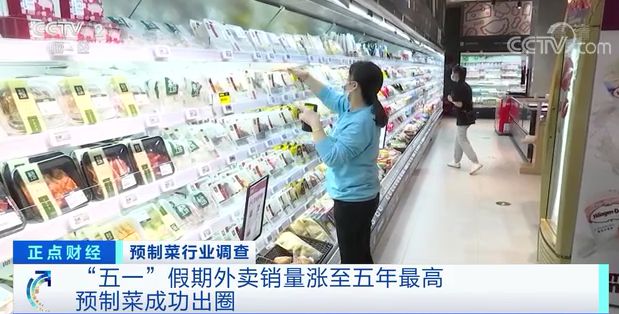 A trillion yuan is coming?

This kind of food is sold out!

Big changes in cooking after 80s and 90s?

Enterprises have laid out one after another!

The most popular "May Day" holiday in history has just ended. This holiday, with the enthusiasm for traveling, the food delivery industry has ushered in a big explosion.

A report from a certain platform showed that the volume of food delivery from hotels on May 1st increased by more than 2 times year-on-year, which surpassed Ching Ming.

Among them, the demand for breakfast and late-night snacks from hotels has grown the most. Tourists love to order breakfasts such as coffee, porridge, and pan-fried, as well as snacks such as special dishes, barbecues, and snail noodles.

"May Day" holiday takeaway sales rose to the highest in five years, pre-made dishes successfully went out of the circle

The "May Day" consumption report released by Ele.me shows that the volume of takeaway orders in the first three days of the May Day holiday this year has increased significantly year-on-year, setting a new high in the past five years.

Ele.me platform staff Xu Xinzhe: Farmer’s food is the most popular holiday takeaway, followed by snail noodles, crayfish and other popular Internet celebrities. They all achieved more than twice the order growth.

Consumers on the "May Day" holiday are keen to order takeaways, while consumers who choose to stay at home this holiday season have brought another kind of food-prepared dishes.

When the reporter came to this supermarket in Shenzhen, the salesperson was sorting out the counter of pre-made dishes. The person in charge said that for this May Day, they originally expected that most consumers would go out for travel, so they just prepared the corresponding pre-made dishes according to the daily stock volume. Sales have soared during the holidays, and some categories are in short supply.

In the past two years, this kind of pre-made dishes that do not need to be washed or selected, and can be served simply by cooking have been welcomed by more and more young consumers.

According to the data of Hema Fresh Food, the proportion of consumers buying semi-finished dishes after "95" has reached twice that of those after "65". At the same time, the category of pre-made dishes has also increased rapidly in the past two years.

The scale of the prefabricated vegetable industry will reach trillions

At present, many companies are actively deploying the "pre-made vegetables" industry.

Industry insiders said that in the long run, my country's prepared vegetable industry is expected to reach a scale of more than one trillion yuan.

Data show that, as of now, there are more than 69,000 "prefabricated dishes" related enterprises in China.

At the same time, many companies are also actively deploying the "pre-made vegetables" industry.

For example, BBK revealed on April 14 that the company has signed a strategic cooperation framework agreement with Shuhai Supply Chain, a B2B company of Haidilao’s catering and food ingredients. The two parties will optimize their cooperation in the scenes of clean vegetables and prefabricated vegetables, as well as cooperation in front-end warehouse logistics. , Joint procurement of commodities, etc.

In addition, the League of Nations Aquatic Products released a quarterly report on April 28, stating that due to the external epidemic catalyzed by changes in consumer consumption habits, the company's product structure will gradually transform to pre-prepared dishes-based meals and marine foods, and the annual pre-prepared dishes revenue scale It is expected to reach more than 700 million yuan.

Yu Jiaqi, Chief Analyst of China Merchants Securities Food and Beverage: There are two main driving forces behind it. The first is consumption upgrade, and the second is the change of everyone's consumption concept.

Pre-made dishes can help everyone save time for preparing dishes, and can liberate labor time and labor productivity to a certain extent.

Many people born in the 80s and 90s have begun to enter the back kitchen. They prefer one-stop compound cooking experience. Therefore, the change in consumption concepts has also led to rapid growth in this industry.

The data shows that currently, the scale of the domestic prepared vegetable market is about 300 billion yuan, accounting for less than 10% of the total food ingredients.

The research report of China Sea Securities pointed out that with the development of cold chain transportation, the sales radius and radiation range of pre-prepared vegetable food will also be further increased. Coupled with the maturity of the industry development, in the long run, my country’s pre-prepared vegetable industry is expected to achieve 3 A scale of more than one trillion yuan.

Yu Jiaqi, chief analyst of China Merchants Securities Food and Beverage: From the perspective of the development of the c-end, because consumers are relatively scattered, education and penetration will take a certain amount of time.

The development of East China is relatively good now.

From the perspective of future trends, I believe this industry must have great potential.