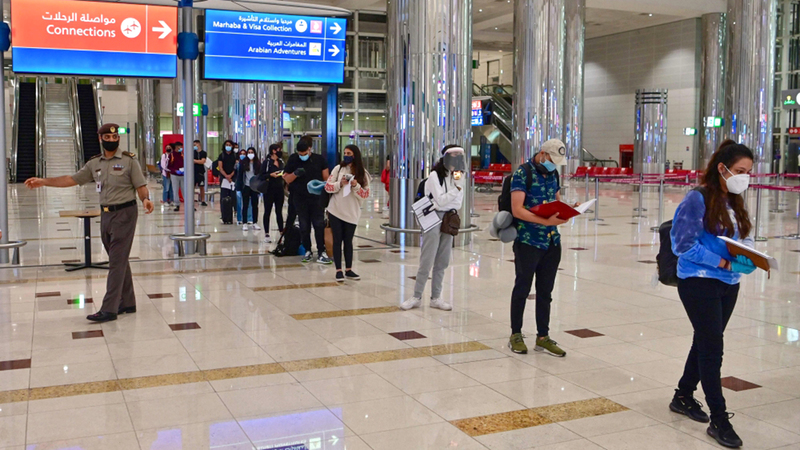 The total number of passengers traveling through Dubai International during the first quarter reached 5.75 million.

The latest data on the Dubai Airports Authority website showed that the total number of destinations served by airlines operating at Dubai International Airport during this May reached 150, operated by 57 national and international airlines.

According to the latest data of the corporation, monitored by "Emirates Today", Dubai International Airport currently serves 63% of destinations in 89 countries, and deals with 75 airlines that were operating through Dubai Airport before the "Covid-19" pandemic.

This data includes airlines designated for passenger transportation only, with the exception of air freight companies.

According to the latest data issued by OAG International, which provides airport and airline data, Dubai International Airport maintains its position as the largest air transport crossing in the world in terms of seat capacity, provided by airlines on international flights departing at the airport.

Dubai International Airport maintained its position as the largest airport in the world in terms of the number of international travelers, during the year 2020, for the seventh year in a row, according to the annual report of the Airports Council International, which monitors the performance of the air transport sector in the world.

International airlines continue to resume their operations through Dubai International Airport, while data issued by Emirates Airlines and Fly Dubai showed a continuous increase in the number of passenger destinations within the two carriers' network, with the implementation of air travel protocols that facilitate travel for UAE citizens. Residents and tourists, while preserving the safety of visitors and communities.

"Emirates Airlines" resumed its flights to about 100 international destinations, while the airline recently announced that it plans to restore 70% of its capacity until the winter of 2021. In turn, flydubai announced the launch of more destinations to reach its network to more than 80 destinations, and the carrier will expand its network. In Russia, to 11 points during the next period.

Fly Dubai's expanded code-sharing partnership with Emirates Airlines provides travelers with smoother connectivity through Dubai International Airport, which is today a global aviation hub providing flights to more than 155 destinations between Emirates Airlines and the flydubai network. , Including Australia, the Indian Ocean, Japan, South Asia, and the United States.

Dubai Airports announced the graduation of its first batch from the "Bedayati" program, which is designed to develop and employ new national graduates, which was held through the virtual "Tamayouz" platform.

The "Bedayaaty" program includes the appointment of 10 fresh graduates of citizens from universities, colleges and various specializations to work at Dubai airports.

The program, launched by Dubai Airports in October 2019, aims to employ and prepare Emirati graduates to engage in working life and move smoothly from the life of a university student, in the aviation sector, which is one of the most important economic sectors in Dubai.

The new graduates underwent an intensive development process, which lasted for 18 months, and included specialized training courses, workshops, and on-the-job training under the supervision of specialists from Dubai Airports, to ensure their ability to practice their new work in the departments to which they were affiliated with confidence.

His Highness Sheikh Ahmed bin Saeed Al Maktoum, Chairman of the Dubai Aviation Authority and Supreme Chair of the Emirates Airline Group, expressed his appreciation for the policies pursued by the Foundation to develop the capabilities of national competencies, stressing that “empowering young Emirati leaders is one of our priorities”.