China Consumer Expo: China's decision to open up again, how will the world share the dividends?

China News Service, Beijing, May 6th, title: Consumer Expo Preview: China's determination to open up again, how will the world share the dividends?   China News Agency reporter Liang Xiaohui   Following the repeated announcement by Chinese senior officials that "China's door to opening up will only open wider" and the opening of the three major exhibitions "CIIE, Service and Trade Fair, and Ca 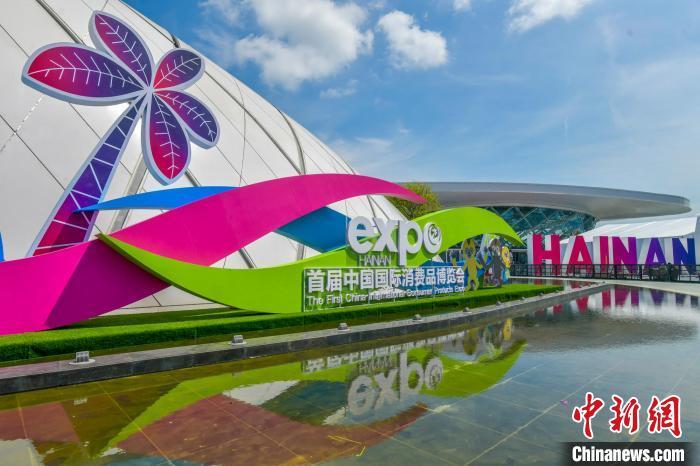 Consumer Expo Preview: China's determination to open up again, how will the world share the dividends?

Following the repeated announcement by Chinese senior officials that "China's door to opening up will only open wider" and the opening of the three major exhibitions "CIIE, Service and Trade Fair, and Canton Fair" to be held as scheduled, China's opening to the outside world has added a new touch-the first China International The Consumer Goods Fair (hereinafter referred to as the "Consumer Fair") will open in Haikou City, Hainan Province from the 7th to the 10th.

The preparations for the first China International Consumer Goods Expo are basically ready. The picture shows the South Square of the Hainan International Convention and Exhibition Center with the theme landscape of the Consumer Expo.

Zero distance: come to the exhibition and explore business opportunities

The Consumer Fair is China's first national-level exhibition with the theme of consumer products, and it is directly open to the public.

Currently, the first 20,000 tickets have been sold out.

According to official forecasts, various audiences will exceed 200,000 during the exhibition, and professional buyers from outside the island will exceed 20,000, showing great appeal.

There is no doubt that the Consumer Expo will bring real gains of "real money" to exhibitors around the world.

But more importantly, it will also provide global companies with zero-distance contact with Chinese consumers, thereby prompting them to have a deep understanding of "Chinese tastes" and help them adjust their "Chinese strategy" and expand "Chinese business opportunities."

At present, more than 650 companies from 69 countries and regions have participated in the exhibition, with more than 1,300 exhibiting brands.

Switzerland will serve as the country of honor for this consumer expo.

Many overseas participating brands believe that the Consumer Fair provides a rare opportunity.

Swiss Appenzell beer producer Aurel Meyer expressed through the media that he hopes to learn more about the Chinese market and Chinese customers through the participation.

I also hope that they can taste our products, give them opinions, and see which products meet the tastes of Chinese consumers.

Chen Kun, Executive Chairman of AuMake, believes that the Consumer Expo will provide companies with an opportunity to communicate with peers, users, and even cross-industry users, which can enhance their understanding of the market and customer needs.

At present, China's per capita GDP has exceeded 10,000 U.S. dollars, and the domestic consumption upgrade demand is strong, but the ever-increasing high-quality supply capacity is still unable to better meet this rapidly growing demand of the people.

Therefore, China's establishment of a platform such as the Consumer Fair is not only a platform for international exchanges and cooperation and a window for opening up to the outside world, but also a practical move to share the consumption needs of 1.4 billion people around the world.

Yu Tao, director of the Hainan Free Trade Port Research Center of the China South China Sea Research Institute, believes that the Consumer Expo has further demonstrated that China has opened its doors wider and wider.

At present, relevant preferential policies "tailored" for the Consumer Fair have been introduced.

Exhibits such as yachts and helicopters will be exhibited at the first consumer fair.

Not ending: buy the world, sell the world

The Consumer Fair is an important measure for China to continue to expand its opening up to the outside world. It is worth mentioning that the government intends to further exert the effects of the exhibition and create a “Never End” Consumer Fair.

The outside world believes that this will also give the world opportunities.

It is known that the project has been planned almost at the same time as the Consumer Expo, and it has been two years.

"Now with the smooth progress of the preparations for the Consumer Expo, we see that the needs of all parties, especially the needs of enterprises and the market, are so strong, we are more and more confident in this project." Shen Danyang said.

In this regard, Hong Yong, an associate researcher at the Electronic Commerce Research Institute of the Ministry of Commerce, suggested that the functions of bonded display, wholesale transactions, and tax-free retail should be highlighted to form a global consumer boutique transaction distribution center.

He also said that it is recommended to combine online and offline to create a "never ending consumer expo" and encourage well-known domestic and foreign e-commerce platforms to help international companies explore the Chinese market.

Including strengthening the use of new business models and models such as cross-border e-commerce and live streaming to achieve "buy the world, sell the world".