China-Singapore Jingwei Client, May 5th. On the 5th, Ctrip and Xinhua Finance jointly released the "2021 May 1st Travel Big Data Report" (hereinafter referred to as the "Report"), showing that 21% of travel groups after "00"; Beijing has become the most popular tourist city, and Shanghai Disney Resort ranks first among the TOP10 popular scenic spots. Order volume increased by about 270% year-on 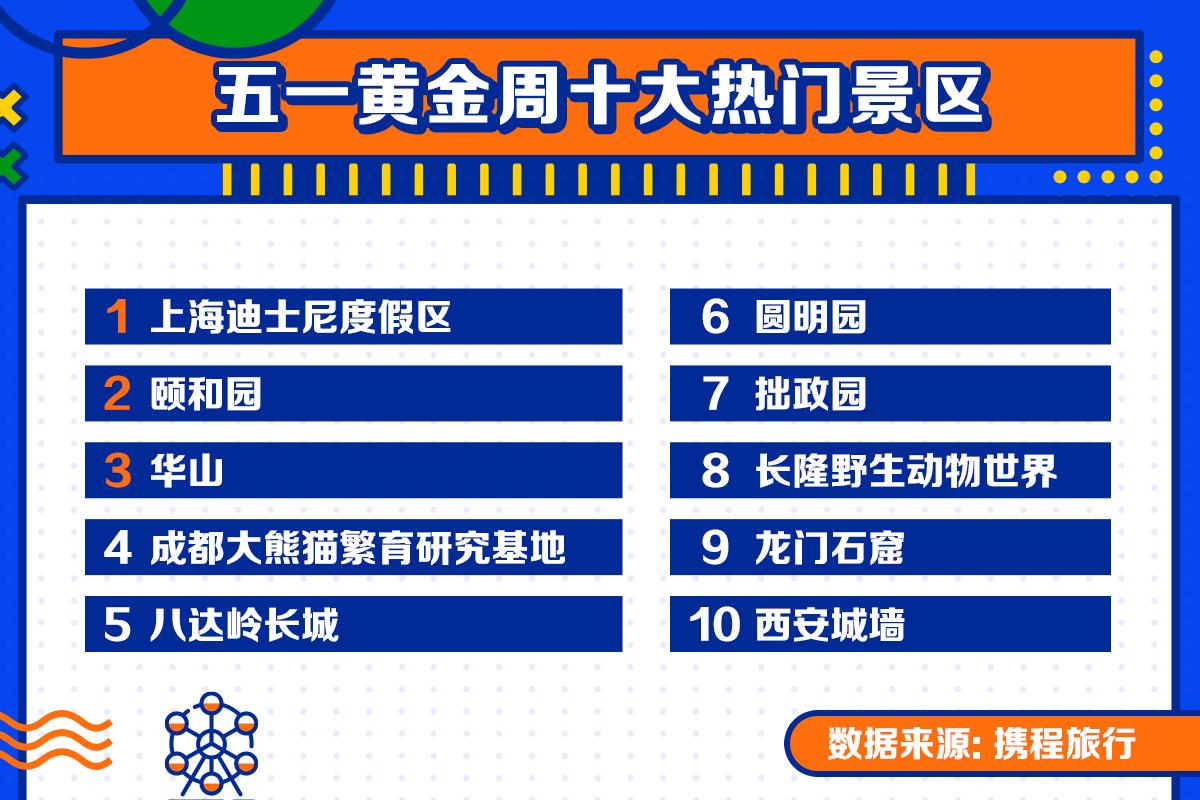 China-Singapore Jingwei Client, May 5th. On the 5th, Ctrip and Xinhua Finance jointly released the "2021 May 1st Travel Big Data Report" (hereinafter referred to as the "Report"), showing that 21% of travel groups after "00"; Beijing has become the most popular tourist city, and Shanghai Disney Resort ranks first among the TOP10 popular scenic spots.

Order volume increased by about 270% year-on-year

This year’s May 1st holiday was five days in a row, and the long-distance travel demand that consumers had accumulated for a long time was released.

Ctrip data shows that Ctrip's "May 1st" Golden Week total order volume increased by about 270% year-on-year, compared with an increase of more than 30% in the same period in 2019.

Among them, Beijing, Shanghai, Guangzhou, Hangzhou, Chengdu, Xi'an, Nanjing, Chongqing, Wuhan, and Changsha were shortlisted as the ten most popular tourist cities during the "May 1st" Golden Week.

Consumers have a strong willingness to travel across provinces, and the single-day order volume of Ctrip's air tickets increased by approximately 28% compared with the same period in 2019.

According to the "Report", "post-90s" accounted for 37% of the "May Day" travel population this year, becoming the absolute main traveler; "post-80s" ranked second, accounting for 27%.

"Post-00s" performed brilliantly in this golden week, accounting for 21% of the total, with tourism spending catching up with "post-80s."

In the gender distribution, female users accounted for 51% of Ctrip, slightly higher than male users.

By comparison, the two main travel groups of "post-00s" and "post-80s" differ in their tourism consumption.

Take scenic spots as an example. Among the popular scenic spots favored by "post-00s", Huashan, known for its "risk", ranks first, followed by Yuanmingyuan, Summer Palace, and Humble Administrator's Garden. Theme parks are only Shanghai Disney Resort. The district was shortlisted in the top ten.

From this point of view, "sliding baby" is the top priority of the "post-80s" small holiday.

In addition, you can find more differences through keyword search.

Mainstream destinations are still hot during the "May 1st" Golden Week, and a number of beautiful and secret places with world-class scenery are also emerging this holiday.

According to the "Report", comparing the top 100 cities in terms of orders in 2019 and 2021, Jingzhou, Lianyungang, Shantou, Huzhou, Datong, Luoyang, Huai'an, Zhangjiajie, Jining, and Rizhao were shortlisted for the fastest growth in this year's "May 1st" Golden Week. Destination city.

Driven by the shift in consumer travel patterns and the recent series of film and television dramas and variety shows, rural tourism has become more and more popular.

Mangya City, where Emerald Lake is located, Gongshan County, where the First Bay of the Nu River is located, and Bango County, located in Nagqu City, were shortlisted as rural tourism destinations with the fastest growth rate during the "May 1st" Golden Week.

In terms of scenic spots, Huashan, Longmen Grottoes, and Shenyang Imperial Palace performed well, ranking among the top three scenic spots with the fastest growth during the "May 1st" Golden Week this year.

It is worth mentioning that the "Report" pointed out that with the improvement of people's consumption level, the consumption scene has gradually changed from "day" to "night".

Consumers are willing to explore the streets and landscapes of the city at night and discover the other side of the city. They are also willing to find "late night canteens" in alleys and alleys. Traditional "night economy" such as nightclubs and bars is even more important for young people. An indispensable factor.

Among the popular tourist cities, Chongqing, Changsha, and Guangzhou have become representative cities for night tours.

Affected by the return of outbound travel consumption, the trend of quality leisure travel during the "May Day" holiday is more prominent, and it is concentrated in "high star hotels" and "private groups".

In terms of private groups, Ctrip's private group orders during the May 1st holiday this year increased by approximately 230% compared to the same period in 2019.

Among them, Beijing, Guilin, Guiyang, Sanya, Hohhot, Xi'an, Yinchuan, Zhangjiajie, Lijiang, and Xiamen are the top 10 destinations for private groups.

Among the new destinations, Guiyang, Beihai and Zhangjiajie ranked in the top three.

With the rise of young power, enthusiasm for music festivals has also become one of the mainstream resorts.

Ctrip community data shows that from April 1st to April 20th, the search volume of the keyword "music festival" nearly doubled month-on-month, which increased by nearly 50% compared to the same period in 2019.

Red tourism is also a popular choice in this small holiday.

According to the "Report", the keyword "red tourism" during the May 1st period increased by about 7 times compared with the same period in April.

The "Report" pointed out that this year's "May 1st" Golden Week is the most popular public holiday in the tourism market since the epidemic. The familiar "people herd" model has returned again. With the current domestic vaccines accelerating popularization, the follow-up tourism market may also maintain With the vigorous growth momentum, it is believed that in the coming summer market and National Day holiday, the domestic tourism economy will burst out with stronger vitality.