The Competition and Consumer Protection Department at the Ministry of Economy confirmed that the current Ramadan season is witnessing general stability in the prices of vegetables, with expanded offers for discounts on a large number of them, pointing out that the expansion in the diversification of imports of vegetables and fruits from different countries of origin contributed to an increase in the price of vegetables. 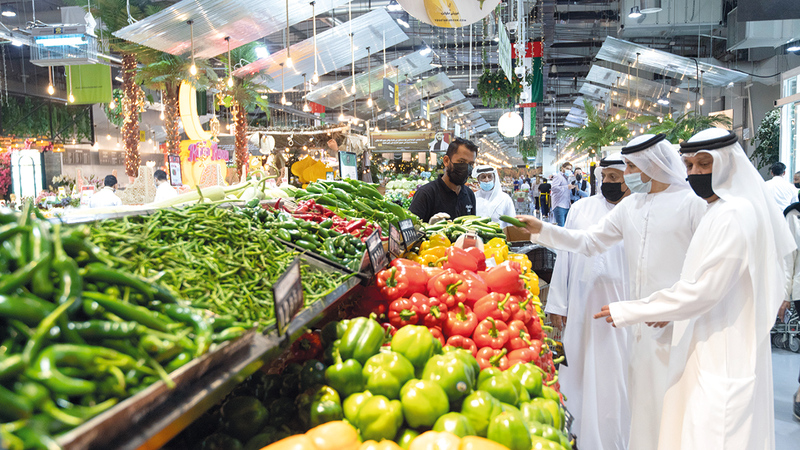 General stability in prices ... and commitment from sales outlets to offers of discounts

The Department of Competition and Consumer Protection at the Ministry of Economy confirmed that the current Ramadan season is witnessing a general stability in vegetable prices, with expanded offers for discounts on a large number of them, pointing out that the expansion in the diversification of imports of vegetables and fruits from different countries of origin has contributed to the increase in offers of discounts on them in the market. .

She added in statements to "Emirates Today", on the sidelines of a field tour carried out by the ministry in the central market for vegetables and fruits in the Ras Al Khor area in Dubai, that she did not monitor any increases in commodity prices, especially basic ones.

In detail, the Director of the Competition and Consumer Protection Department at the Ministry of Economy, Marwan Al-Sabousi, said that the ministry has implemented more than 450 control and field rounds in the markets since the beginning of the month of Ramadan, in coordination with the local departments in the country, pointing out that the number of monitoring rounds implemented so far exceeded the initial plans. The issue that was previously defined by 420 rounds during the month, which makes the total monitoring rounds at the end of the fasting month exceeds the number of rounds during the last month of Ramadan.

In statements to "Emirates Today", he asserted that the expansion of the diversification of imports of vegetables and fruits from different countries of origin contributed to raising the offers of discounts on them in the markets, at rates exceeding those during the previous Ramadan season, especially with the support of the flow of supply, compared to the last year which witnessed challenges Affected by the repercussions of the spread of the Corona virus, which led to difficulties in importing from some countries.

Al-Sabousi added that the current Ramadan season is witnessing a general stability in the prices of vegetables, with expanded offers for discounts on a large number of them, in addition to a large abundance of products, and the presence of various alternatives for all commodities, pointing out that there are no noticeable effects of the end of the local planting season for a number of agricultural varieties. Due to the pumping of large quantities of alternatives to these items from different countries.

He explained that local tomatoes, with their limited availability, had multiple alternatives supplied at low prices from countries such as Malaysia, Azerbaijan, Jordan, and India, at a time when types of onions that were recording some price increases during the previous Ramadan season witnessed abundance and a decrease in prices with the availability Types and alternatives from India, European and Arab countries.

Al-Sabousi stressed that the country's distinguished position as a regional headquarters for food trade contributes to the ease of importing from various countries of the world, and thus the markets are not affected by the absence of certain commodities. The growing season of Turkish lemon varieties.

Al-Sabousi explained that, since the beginning of Ramadan, the Ministry has been conducting intensive meetings with companies supplying vegetables and fruits, to expand operations to pump additional quantities that meet the growth of consumer demand during the month of Ramadan, and in a way that supports price stability, stressing that the ministry has not monitored any increases in commodity prices, especially the basic ones during the month. Ramadan, and monitored a commitment from sales outlets with offers of discounts.

He pointed out that the relations between the Ministry of Economy and the suppliers of goods or sales outlets are based on long-term partnership and supported by mutual efforts in a way that preserves the availability of goods and the stability of markets.

He stated that the field visits and tours included cooperative societies, sales outlets, grocery stores, and meat, chicken and fish markets in the various emirates of the country.

The consumer is an essential partner in censorship

The Director of the Competition and Consumer Protection Department at the Ministry of Economy, Marwan Al-Sabousi, said that the consumer is a primary partner in monitoring, pointing out that his role is not limited to submitting complaints about prices or product quality only, but also to strengthening the environment for consumer protection in the country through cooperation with the authorities Supervision, in the forefront of which is the Ministry of Economy, by communicating with the ministry's call center on 8001222, reporting harmful commercial practices to consumer protection, and submitting their suggestions and observations to develop the consumer protection environment in the country.