Chinanews client, Beijing, April 22 (Zuo Yukun) The Beijing property market ushered in a heavy notice.   On April 22, the Beijing Municipal Commission of Housing and Urban-Rural Development issued the "Notice on Further Strengthening the Order and Rectification of the Real Estate Market", requesting a severe crackdown on illegal behaviors in the housing sales and leasing market in accordance wi 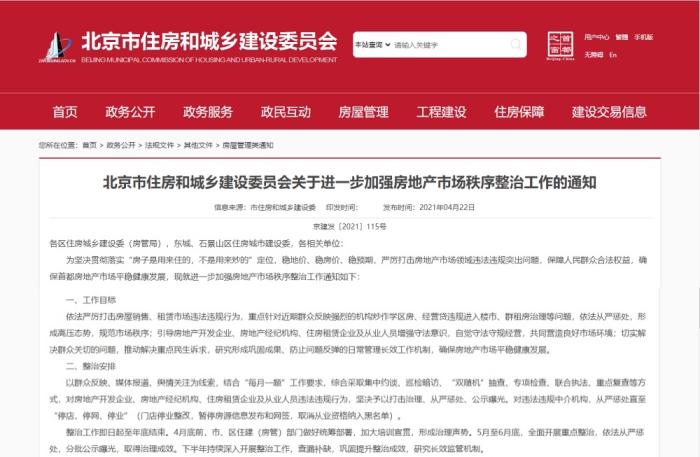 On April 22, the Beijing Municipal Commission of Housing and Urban-Rural Development issued the "Notice on Further Strengthening the Order and Rectification of the Real Estate Market", requesting a severe crackdown on illegal behaviors in the housing sales and leasing market in accordance with the law.

The notice pointed out that the focus will be imposed on issues such as institutional speculation in school district housing, illegal entry of business loans into the property market, and management of group rental housing that have recently been strongly reported by the masses, to form a high-pressure situation and standardize market order.

Focus on rectifying the speculation of housing prices in school districts

The notice pointed out that one of the key points of rectification in the sales of stock housing is to use school district housing to speculate on housing prices.

Specifically, it is necessary to check whether the brokerage agency exaggerates the transaction information and guides the seller to increase the quotation at will; whether to disseminate information about the shortage of housing and the increase in housing prices to the seller and the customers; whether to use "school district, school district housing, school district quota", etc. Promote the listing in name; whether to publish articles on WeChat Moments and self-media channels that create panic when buying a house; show whether the house price is consistent with the owner's written commission price; whether to publish a house whose listed price is significantly higher than the reasonable transaction price information.

Recently, many cities, including Beijing, Shanghai, Shenzhen, Hefei, etc., have successively introduced relevant policies to cool down the school district’s housing, and Beijing has even resorted to more tactics.

On April 2, the Beijing Municipal Commission of Housing and Urban-Rural Development announced the progress and implementation of the special inspection and governance work for housing speculation in the school district. Among them, 6 intermediary stores were closed for rectification and 17 cases were filed for punishment.

On April 16, Beijing's Xicheng District Housing Management Bureau, together with the District Market Supervision Bureau, the District Taxation Bureau, and the Xicheng Public Security Bureau, carried out a joint enforcement inspection on some real estate brokerage agencies in Desheng Street and Financial Street Street where the real estate market is more active and housing prices are higher.

On April 19, the Beijing Municipal Education Commission issued the "Opinions on the Enrollment of Schools in the Compulsory Education Stage in 2021", clarifying that this year the city will further increase multi-school scribing, and steadily promote multi-school scribing and single-school scribing. As a supplement to the enrollment method, the introduction of this policy will also have a certain impact on the school district’s housing market.

Focus on rectification of illegal house purchases with credit funds

This time, the Beijing Municipal Commission of Housing and Urban-rural Development once again named "operating loans".

The notice requires checking whether brokerage agencies recommend or encourage illegal use of financial products such as operating loans and credit loans to purchase houses; when providing brokerage services for the sale of new and second-hand houses, whether buyers are required to promise in writing that there is no misappropriation of bank credit funds for house purchases And other issues.

Data map: Workers on a construction site are busy.

Since the beginning of 2021, many places have launched "encirclement and suppression" actions against illegal embezzlement of business loans to buy houses.

Recently, the Beijing Banking and Insurance Regulatory Bureau announced that banks within its jurisdiction have conducted self-examinations on the compliance of personal business loans issued since the second half of 2020, and found that the amount of personal business loans suspected of illegally flowing into the Beijing real estate market is about 340 million yuan. .

In addition, investigations by relevant departments in Guangdong found that banking institutions within their jurisdiction (excluding Shenzhen) were suspected of illegally flowing into the real estate market with a problematic loan amount of 277 million yuan.

"In the first quarter, the property market, especially in the first-tier cities, heated up significantly. A very important factor was the inflow of operating loans into the real estate market." Wang Xiaoqiang, an analyst at the Zhuge Real Estate Data Research Center, believes that a strict investigation of the inflow of operating loans into the property market will affect the health of the real estate market. Stable development has positive significance.

The notice pointed out that in terms of housing leasing, the focus will be on rectifying illegal group rentals and short-term rentals.

Specifically, it is necessary to severely crack down on group renting in five areas, namely focusing on the rectification of illegal group renting areas such as hospitals, schools, market business districts, industrial parks, and transportation hubs, as well as complaints concentrated communities, and continuing to increase law enforcement for illegal group renting. Check the intensity.

The notice also stated that it will work with relevant departments to strengthen the joint supervision and law enforcement of short-term rental housing in Beijing, especially in the core area, combining online and offline, online random checks on the release of short-term rental housing information on various platforms, and offline to corporate office sites. an examination.

"This policy further embodies the management and control thinking of'renting and selling and grasping'." Yan Yuejin, research director of the Think Tank Center of E-House Research Institute, said that similar inspections have captured the main contradictions in the leasing market, and such areas are indeed chaotic conditions for group leasing. More places.

Managing such areas will help purify the leasing market and protect the rights and interests of tenants.

The notice stated that the rectification work will end now until the end of the year.

Before the end of April, the municipal and district housing construction (housing management) departments will make overall arrangements, increase training and publicity, and create a momentum for governance.

From May to the end of June, comprehensive implementation of key rectifications, severe punishments in accordance with the law, public announcements in batches, and results of rectification were achieved.

In the second half of the year, we will continue to carry out in-depth rectification work, check for omissions, consolidate and improve the effectiveness of rectification, and study long-term regulatory mechanisms.

"This policy involves the remediation of 12 items, involving new houses, second-hand houses and rental housing. The release of the'Beijing Real Estate Renovation 12 Items' has positive reference significance for other cities across the country." Yan Yuejin said.