Ranking of per capita disposable income in the first quarter: Shanghai exceeded 20,000, 8 places above average

China-Singapore Jingwei Client, April 23 (Xiong Siyi) A few days ago, the National Bureau of Statistics announced the first quarter per capita disposable income of 31 provinces. Shanghai, Beijing, and Zhejiang were among the top three, and 8 provinces exceeded the national average. 8 provinces exceed the national average   Data show that in the first quarter of 2021, Shanghai people can earn t 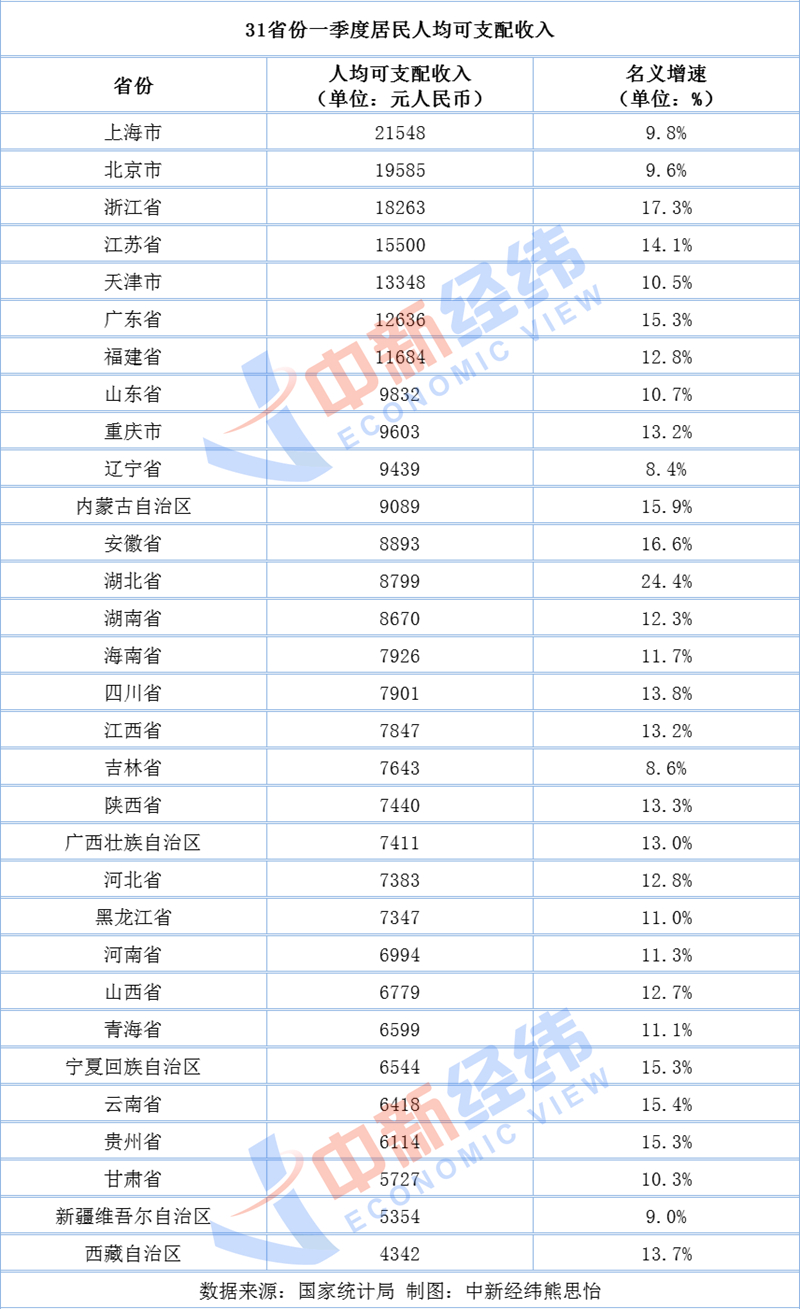 China-Singapore Jingwei Client, April 23 (Xiong Siyi) A few days ago, the National Bureau of Statistics announced the first quarter per capita disposable income of 31 provinces. Shanghai, Beijing, and Zhejiang were among the top three, and 8 provinces exceeded the national average.

Data show that in the first quarter of 2021, Shanghai people can earn the most, with a per capita disposable income of 21,548 yuan, and Shanghai is also the only region to break the 20,000 yuan mark.

Followed by Beijing and Zhejiang, the per capita disposable income is 19,585 yuan and 18,263 yuan respectively.

Previously released data by the National Bureau of Statistics showed that in the first quarter of 2021, the national per capita disposable income of residents was 9,730 yuan, a nominal increase of 13.7% over the same period last year.

Measured by this standard, in the first quarter of 2021, the per capita disposable income of residents in Shanghai, Beijing, Zhejiang, Jiangsu, Tianjin, Guangdong, Fujian, and Shandong exceeded the national average.

In terms of nominal growth rates, the growth of per capita disposable income of residents in the 10 provinces of Hubei, Zhejiang, Anhui, Inner Mongolia, Yunnan, Guizhou, Guangdong, Ningxia, Jiangsu, and Sichuan outperformed the country in the first quarter, with Hubei’s nominal growth rate reaching 24.4%.

Wage income is the cornerstone of driving residents' income growth

According to income sources, in the first quarter, the national per capita wage income was 5,505 yuan, an increase of 12.4%, accounting for 56.6% of disposable income.

Fang Xiaodan, director of the Household Survey Department of the National Bureau of Statistics, explained that wage income is the cornerstone of the growth of residents' income.

Fang Xiaodan further analyzed that since the first quarter, the national economy has continued to recover steadily, and the effects of ensuring employment for residents and ensuring market players have continued to show.

At the same time, the local Chinese New Year has significantly increased residents’ working hours, accelerated industrial production growth, and the gradual recovery of the service industry, which has led to an increase in rural residents’ going out to work, laying a solid foundation for the steady growth of urban and rural residents’ wage income.

51job.com recently released the "Salary Research Report for the First Quarter of 2021" and pointed out that the current company has adapted to the "normalization of the epidemic" and its operations have stabilized. Compared with 2020, the internal and external conditions for the company to adjust employee compensation have gradually improved. As an important adjustment window for the annual salary, a considerable proportion of enterprises made corresponding salary adjustments in the first quarter.

The above report also mentioned that by geographical space, non-first-tier developed cities led the increase in salary; according to the nature of the company, private and state-owned enterprises were relatively leading; according to the type of industry, financial/investment/securities, communications/telecommunications/networks The equipment industry, electronic technology/semiconductor/integrated circuit industry led the salary increase.

Regarding income increase, experts say this

How to achieve the goal of "Expanding China"?

In an interview with the Overseas Edition of the People’s Daily, Su Hainan, a special researcher of the Chinese Society of Labor, said that employment is the biggest livelihood of the people and the source of the expansion of middle-income groups; improving the quality of middle- and high-level employees is an important support for the “expansion”.

This article does not represent the views of Sino-Singapore Jingwei.