Andreas Scheuer: "We are making Germany a cycling country"

Green topics are currently very popular in surveys. Transport Minister Andreas Scheuer does not want to stand back and has become a pioneer in bicycle policy. Cyclists should get more space in traffic - also at the expense of motorists. 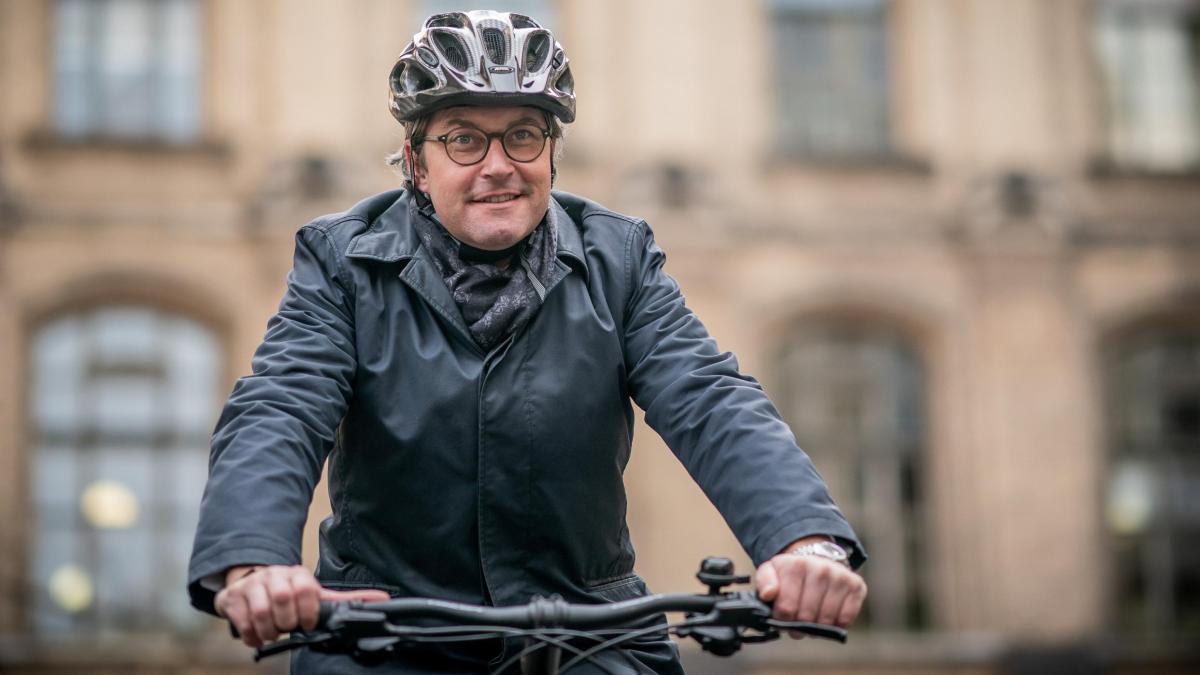 When Andreas Scheuer looks at Berlin's Invalidenstrasse from his office in the Federal Ministry of Transport, he is annoyed, he says.

Although the road section has only recently been redesigned, the lane for cyclists has become so narrow that they regularly have to switch to the adjacent lane.

Of course, the city of Berlin would have been responsible, not the Federal Transport Minister, says Scheuer.

But the CSU minister seems to have finally discovered his sympathy for cycling not only when looking out of the office window.

So far it has been part of the brand essence of the Greens, who are currently in the polls, but that is now about to change.

The paper is the result of a “dialogue forum” in which, in contrast to the previous plans, not only experts but also citizens could contribute.

The plan is now becoming the guidelines for transport policy for the federal government.

It is true that it is hardly a matter of concrete, large sums of money that one wants to spend on cyclists.

But the fundamental decision that the plan lays down is still remarkable in Germany, the automobile state: the bicycle is to have right of way in the future.

In the future, cyclists should have more space and since there is hardly any new space to distribute, other road users such as the car will have to do without it.

The National Cycling Plan is astonishingly clear: both in rural areas and in cities, the public space must be changed in favor of cyclists, it says on page 21. "To this end, the areas will be redistributed - also at the expense of motor vehicle traffic."

When presenting the plan, Minister Scheuer becomes even clearer: “We want the system to be reversed,” he says.

"We are making Germany a cycling country."

So far, when planning a new road, one has to look at the end to see whether there is still room for a bike path.

In the future, the bicycle lane will always have to be automatically considered, planned and built.

Scheuer says that one wants to resolve and avoid conflicts in road traffic in the future.

But at first the plan sounds like additional potential for controversy: “Of course, there will be a parking space missing from time to time,” says Scheuer.

When asked, he would rather not speak of a general right of way for bicycle traffic.

"Where there is right of way, it creates conflicts," said the minister.

But these can hardly be avoided, especially in cities, where the various modes of transport compete for space.

In any case, the bicycle lobby is delighted with the unusual support from the Ministry of Transport.

ADFC speaks of a "small revolution"

The General German Bicycle Club (ADFC) even speaks of a "small revolution" that Scheuer has committed to the plan to shift traffic from cars to bicycles in particular.

"It is absolutely correct - in the narrow cities, sufficient space for safe cycling can only be created by redesigning parking lots and vehicle lanes," says ADFC Vice President Rebecca Peters.

"It's good that the Federal Ministry of Transport is speaking clearly here and renounces everyone's space for car thinking."

However, the ADFC also noticed that the National Cycling Plan remains vague, especially when it comes to implementing its goals.

The association demands an additional action plan with “measurable milestones, concrete modal shift targets and long-term funding” from the next federal government.

So far, funding has only been secured until 2023 - too short for infrastructure projects.

In addition, in view of the great demand, more money is needed than previously planned.

In fact, at least the abstract goals are quite ambitious.

Bicycle traffic is expected to double to 224 million kilometers per year by 2030.

In return, the average German should no longer get on their bikes 120 times a year as they do today, but 180 times in the future.

The distances covered should increase from an average of 3.7 kilometers to six kilometers.

With the opposition from the Greens, they don't just want to let Scheuer overtake them with their own brand core and report considerable doubts.

"The new national cycling plan shows once again that Transport Minister Scheuer is and will remain an announcement minister," says the bicycle policy spokesman for the Bundestag parliamentary group, Stefan Gelbhaar.

For a traffic turnaround and better cycling, it is not enough to write on paper and reserve some money from the funding cake.

"If Scheuer seriously wants more bicycle traffic, then he must finally implement ideas and measures," said the opposition politician.

If the transport minister is serious about promoting bicycles, he has to make speed 30 the normal speed in urban areas, he says that higher fines and consistent driving bans are needed if the speed limit is violated.

“The speed decides whether and how an accident occurs,” says Gelbhaar.

"Instead, the Minister of Transport is campaigning for the continuation or even the expansion of tax and legal privileges for car traffic." In addition, the federal government must ensure that the municipalities can more easily create more space for cyclists.

is the daily stock market shot from the WELT business editorial team. Every morning from 7 a.m. with the financial journalists from WELT. For stock market experts and beginners.