Ministry of Industry and Information Technology: The output of new energy vehicles in the first quarter increased by 3.1 times year-on-year

Chinanews, April 20, 20th, the State Council Information Office held a press conference on the development of the industrial communications industry in the first quarter of 2021. At the meeting, Huang Libin, spokesperson of the Ministry of Industry and Information Technology and director of the Operation Monitoring and Coordination Bureau, said that the output of new energy vehicles, industrial 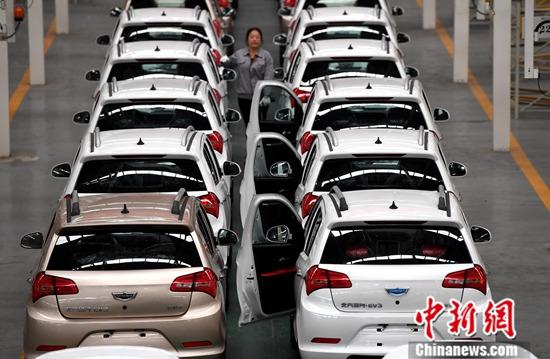 Chinanews, April 20, 20th, the State Council Information Office held a press conference on the development of the industrial communications industry in the first quarter of 2021.

At the meeting, Huang Libin, spokesperson of the Ministry of Industry and Information Technology and director of the Operation Monitoring and Coordination Bureau, said that the output of new energy vehicles, industrial robots and other products in the first quarter increased by 3.1 times and 1.1 times respectively year-on-year.

Regarding the performance of the industrial economy in the first quarter, Huang Libin said: First, the main economic indicators remained within a reasonable range.

From the macro data, the value added of the industrial enterprises above designated size in the first quarter increased by 24.5% year-on-year, the two-year average growth rate was 6.8%, and the month-on-month growth was 2.01%; the industrial capacity utilization rate reached 77.2%, which is also the highest value since 2013 in the same period.

Industrial production as a whole has basically returned to the normal level before the epidemic.

From the personal experience of enterprises, the profits of industrial enterprises above designated size in the first two months have increased by 1.79 times year-on-year, and the average growth rate in the two years has reached 31.2%. The vitality of market entities has further strengthened.

In terms of market confidence and expectations, the Manufacturing Purchasing Managers Index (PMI) was 51.9% in March, an increase of 1.3 percentage points from the previous month, and it has remained above the line of prosperity for 13 consecutive months.

Second, the balance and endogenous nature of economic recovery continue to increase.

As the economy continues to recover steadily, major industries have gradually got rid of the impact of the epidemic, and the recovery has continued to expand.

In the first quarter, 40 of the 41 major industrial industries achieved year-on-year growth. Compared with the same period in 2019, 35 industries also achieved growth. This number increased by 4 industries from the previous two months, and the industry growth area reached 85.4 %.

At the same time, domestic and foreign demand is steadily picking up, consumption potential is also continuing to be released, industrial product exports have maintained rapid growth, manufacturing investment has also recovered, and industrial growth has gradually entered a virtuous circle track.

The third is to accelerate the development and growth of new drivers.

The growth of new industries and new products is strong. In the first quarter, the added value of high-tech manufacturing and equipment manufacturing above designated size increased by 31.2% and 39.9% year-on-year, respectively. The two-year average growth rate reached 12.3% and 9.7%, both faster than the overall manufacturing industry. Level.

Investment in high-tech manufacturing increased by 41.6% year-on-year, and the two-year average growth rate reached 10.7%, which was also significantly higher than the overall manufacturing level.

New business formats and new models continue to emerge. New models such as live delivery, remote office, online diagnosis and treatment are developing well, and online and offline integration is speeding up.

In the first two months, the cost and expense of each hundred yuan of operating income of industrial enterprises above designated size decreased by 1.16 yuan and 1.38 yuan year-on-year, respectively, and the operating income profit margin reached 6.6%, which is also a relatively high level in recent years.

Huang Libin pointed out that overall, in the first quarter, the industrial economy showed a “three-stable” trend of stable recovery, stabilization while strengthening, and stability while improving.

While seeing the achievements, we must also pay close attention to the new situations and new problems that have emerged in the economic operation.

The current global epidemic situation still has great uncertainty. The world economic situation is complex and changeable. There is still a process for domestic and foreign demand to return to normal levels. The imbalance of recovery between industries and enterprises still exists, raw material growth is rising, and chip supply is rising. Problems such as shortages have emerged, and the production and operation of enterprises are still facing more difficulties, and the foundation for continuous recovery needs to be further consolidated.

"Of course, we must also see that the fundamentals of my country’s long-term economic improvement have not changed. It has entered a new stage of development, implemented new development concepts, and built a new development pattern. The foundation for sustainable industrial development is more solid and stable, and the high-quality development pace of the manufacturing industry. More stable and powerful, with continuous optimization and improvement of supply quality and industrial competitiveness, we are confident, confident, and able to achieve a good start to the "14th Five-Year" industrial economy." Huang Libin said.