Etisalat Digital, a subsidiary of Etisalat Group, announced yesterday the commercial launch of the first platform in the UAE and the Gulf for digital trade region, based on the use of blockchain technologies in commercial banking operations, in cooperation with seven major banks in the country. At a conference 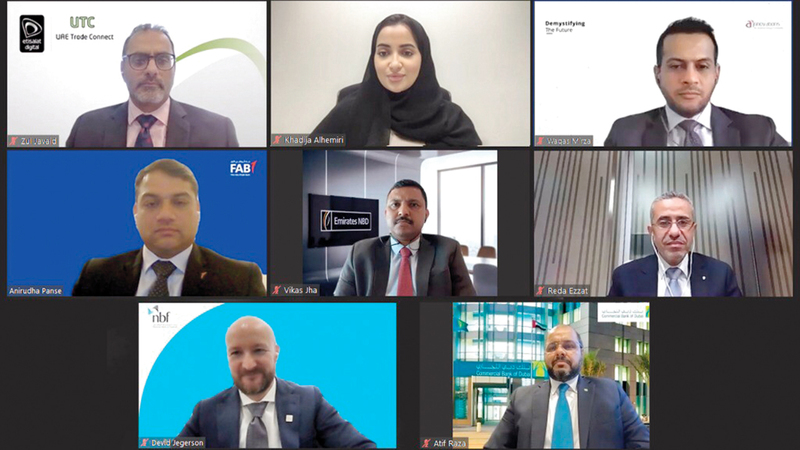 It includes 7 banks now ... and aims to reduce the risks of trade finance

The press conference was held remotely.

Etisalat Digital, a subsidiary of Etisalat Group, announced yesterday the commercial launch of the first platform in the UAE and the Gulf region for digital trade, based on the use of blockchain technologies in commercial banking operations, in cooperation with seven major banks in the country.

She explained in a virtual press conference yesterday that the platform aims to reduce the risks related to trade finance to expand in the areas of digital trade, while increasing the financing of small projects.

She pointed out that the platform will focus during the initial phase on protecting banks from the risks of fraud using invoices, and later on expanding to include other essential elements of trade finance operations, such as digitizing bills of lading and electronic invoices.

She pointed to the formation of a steering committee for the platform consisting of the UAE Central Bank and seven banks: “Commercial International”, “Dubai Trade”, “Emirates NBD”, “First Abu Dhabi”, “Al Mashreq”, “Fujairah National”, and “Ras Al Khaimah. the National".

The Executive Director of Operations at the Central Bank, Dr. Sabri Al-Azazi, said that the platform contributes to reducing fraud risks resulting from the current paper-based system in the field of trade finance, and reflects the banking sector's commitment to the digital transformation process to prepare the UAE to enter a new era of banking services. Digital, pointing out that the platform is one of the main steps to enhance monetary and financial stability, and the efficiency of the country's financial system.

In turn, the CEO of UTC, Zulkarnain Javed, said that the platform works to secure and facilitate trade, verify the conformity and integrity of commercial invoices, freight bills, and bank guarantees, as well as reduce trade finance risks, especially for small and medium-sized companies. This removes major financial obstacles facing them, and improves their chances of obtaining the necessary financing for their businesses and projects.

He stressed that the platform will expand during the coming period, to include more banks, calling on all banks to join it, and working together to combat fraud and double financing risks, in addition to many other challenges related to trade finance.

He revealed that four other banks are on their way to join the platform, which he said will transform within a short period into a fully digital national platform, characterized by ease and ease of joining it at any time in the future.

He stressed that “Etisalat Digital” has formed, in addition to the seven banks, a working group to develop and expand the platform to include other areas of trade, pointing out that the platform, which is characterized by that its participation is available to the banking sector in the country, will work through advanced technologies to protect banks from losses from operations. Potential fraud, and in a way that allows it to continue financing its small and medium-sized corporate clients in a safe and reliable manner.

He stressed that the platform is a milestone in the march and development of the financial and banking sector in the country, especially as technological developments provide innovative solutions to the problems and challenges that the sector suffers from, in a way that enables it to meet the financial and banking requirements of its clients in a continuous and safe manner, indicating that the platform is consistent with the vision of the UAE government calling The need to take advantage of future technologies, such as "blockchain", in a way that makes them a new catalyst for economic growth.

Javed said that the UTC platform relies on blockchain technology and other modern technologies, in a way that enables data to be shared in a secure manner. Technologies such as artificial intelligence, machine learning, optical character recognition and automation of robotic processes read invoices to identify cases of duplication, fraud and transactions. Suspect within trade finance services.

And he indicated that the platform will focus during the initial phase on protecting banks from the risks of double financing and fraud using invoices, and that it will later expand to include other basic elements of trade finance operations, such as digitizing bills of lading and electronic invoices.

He emphasized that the company aims to lead the digital transformation of trade in the country, by enabling banks, institutions and government agencies to collectively benefit from future technologies.

Banks participating in the conference confirmed that the platform aims to focus more on small projects, pointing out that transaction fees will be minimal.

The Director of Trade and Structured Finance at Mashreq Bank, Reda Ezzat, said that the platform targets all companies, although it focuses more on small projects, because it works to remove financing obstacles facing them by reducing the risks of financing them from banks.

In turn, David Gigerson, Head of Customer Experience and Platform Development at National Bank of Fujairah, said that the platform is the first of its kind for "blockchain" in the UAE and the Gulf that includes banks, stressing that the platform will provide various technological solutions for business development according to the requirements and needs of the future market.

For his part, Head of Sales and Banking Operations at Commercial Bank of Dubai, Atef Reda, confirmed that the fees for the platform's transactions will be minimal.