The commercial registration and licensing sector in the Dubai economy has officially opened the "Khufu" restaurant in its new look, indicating that the unique Pharaonic restaurant is located in the Seef heritage area on the banks of the Dubai Creek. The inauguration comes within the framework of the "Jadam Khair" initiative, which aims to launch distinguished projects 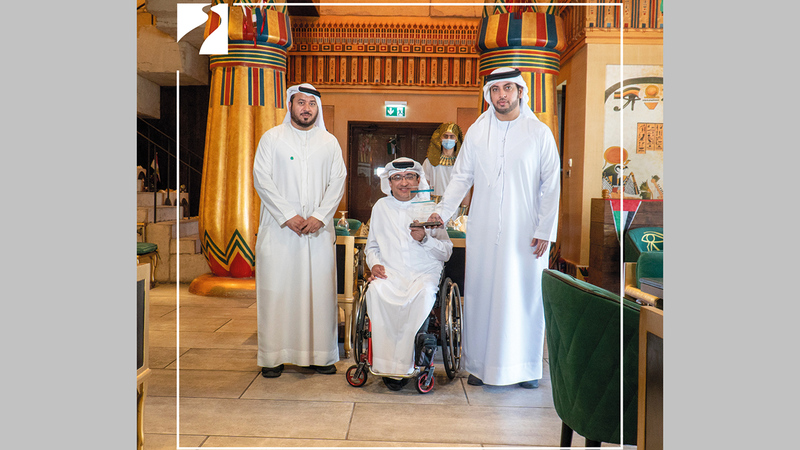 Within the framework of the initiative «Jadam Khair»

The owner of the restaurant, Majid Al-Osaimi (center), confirmed that government agencies have contributed to supporting the project.

The commercial registration and licensing sector in the Dubai economy has officially opened the "Khufu" restaurant in its new look, indicating that the unique Pharaonic restaurant is located in the Seef heritage area on the banks of the Dubai Creek. The opening comes within the framework of the "Jadam Khair" initiative, which aims to launch distinguished projects and facilities for regional and international brands. And in harmony with the ancient and rich past of the Seef area, "Khufu" restaurant reflects the Pharaonic style, and its interior design is inspired by the luxurious palace of King Khufu, who ruled Egypt during the Fourth Dynasty. The interior and exterior design of the restaurant is a masterpiece, as it includes luxurious columns and hieroglyphic murals, in addition to many other pharaonic landmarks.The owner of the restaurant, Majed Al-Osaimi, said, “The idea of ​​the (Khufu) restaurant came from the Egyptian civilization, as I have a passion for learning civilizations, especially the Egyptian ones that we learned from childhood, and when I thought about establishing a free business and trade, I thought about doing something related to this civilization, and I went to Egypt and I visited museums, institutes, and artists, until I painted the large painting in the restaurant, which represents the Great Pyramid, which is (Khufu) ».

He added, "I succeeded with all precision in reflecting part of that civilization on the frescoes of the (Khufu) Restaurant, which consists of two floors."

Al-Osaimi added: “I am proud to be the son of Dubai and the son of the Emirates. Dubai is always a catalyst and loves the challenge, and it brings the future, creates it and follows it,” indicating that government agencies have contributed to supporting the project, especially the Dubai economy, where many things have facilitated.

It is noteworthy that the “Khufu” restaurant offers many Egyptian, Arab and international dishes, where a variety of dishes can be eaten in a distinctive Pharaonic atmosphere.

On top of that list and dishes are ancient Egyptian foods, such as Mahashi, grills and pastries, and breakfast is considered one of the main and distinctive meals that contain many choices of eggs, beans, falafel and various types of cheeses, vegetables and fresh juices, in addition to the healthy breakfast menu for those looking to be thin And lose weight.

The “Jadam Khair” initiative carries an economic and societal character at the same time, as it provides motivational and moral support during the official launch of projects and commercial establishments, which confirms the extent of the interest that Dubai Economy attaches to new companies, and its keenness to closely follow the business reality, in addition to enhancing the confidence of companies New and existing realities of business and commercial traffic in Dubai.