Do you want to stock up salt? E-commerce said sales are almost the same as usual experts: no need to panic buying

Sino-Singapore Jingwei Client, April 14th (Meng Zhang and Wenbo Dong) The Japanese government has officially decided to discharge Fukushima nuclear wastewater to the sea to attract global attention. Will table salt be contaminated? Is the salt supply affected? E-commerce: sales are about the same as usual   On the 13th, e-commerce platform data showed that the search and transaction data of io 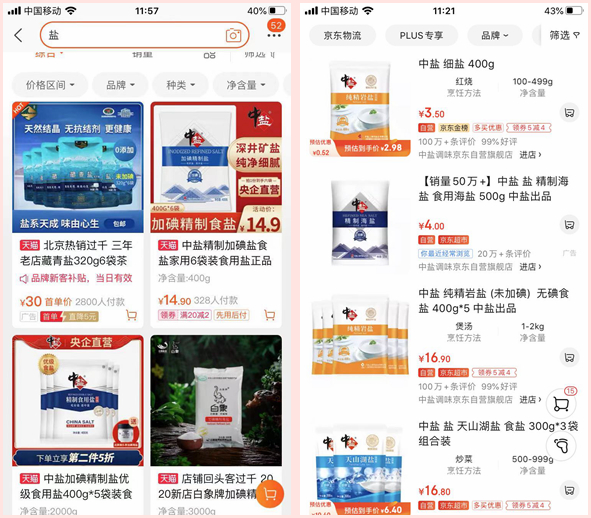 Will table salt be contaminated?

Is the salt supply affected?

E-commerce: sales are about the same as usual

On the 13th, e-commerce platform data showed that the search and transaction data of iodized salt products increased by 322% month-on-month, especially in Linhai provinces and cities: Zhejiang, Guangdong, Fujian, Shandong and some cities in Liaoning.

On the morning of the 14th, China-Singapore Jingwei reporters logged on to e-commerce platforms such as Tmall and JD.com and searched for the keyword "salt" and found that there were sufficient related products and no obvious shortage of goods.

A reporter from Sino-Singapore Jingwei contacted the staff of several flagship stores of salt e-commerce and asked whether they were affected by Japan's nuclear waste water discharge.

China’s food industry analyst Zhu Danpeng told a reporter from Sino-Singapore Jingwei that Japan’s discharge of nuclear waste water is illegal and illegal, in violation of international conventions, and nuclear waste water is discharged into the sea, which has a huge impact on the entire marine ecology, from the perspective of fish and seafood. The impact is great, and it is the same for Haiyan. Whether it is from the policy side, the capital side, the industry side, and the consumer side, it will trigger a huge chain reaction and impact.

Zhu Danpeng also added that in addition to sea salt, we also have lake salt and well salt, which will not cause panic topics. In particular, lake salt can be supplied from Qinghai and Ningxia. There is no need to panic buying salt.

Most salt stocks fell in the intraday

In the early trading of April 14, except for the currently suspended *ST Salt Lake, the remaining stocks did not have significant fluctuations in the intraday trading.

Many investors are also very concerned about Japan's decision to dispose of nuclear wastewater by means of marine discharge.

In the stock bar, an investor asked: "Does the discharge of nuclear waste water into the ocean not affect Japan? Why do you still want to discharge it and kill itself?"

Some investors also mentioned hoarding salt: "The search volume of salt in major e-commerce companies has soared by more than 400%, and the rhythm of salting up again?" "Plan to buy some salt for reserve" "In response to seawater pollution, salt should be reserved" "estimate I'll grab salt soon, so hurry up and stock up some safe salt."

Some investors said, “Sea salt is polluted; mineral salt is very good” and “There are many people who buy salt for dried sea goods, and the spring of mineral salt is here.”