Sales outlets and cooperative societies in Abu Dhabi witnessed great congestion on the night of Ramadan and the first day of it, for the purchase of food and consumer goods. A field tour of "Emirates Today" in a number of outlets showed that the purchases were focused on food commodities, as the congestion was in the sales departments etc. 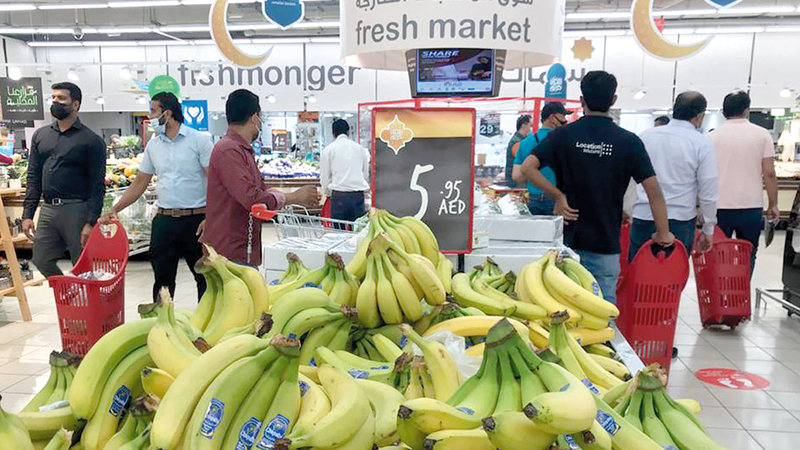 Two Responsible: Signboards to adhere to safe distances and the appropriate timing for shopping must be chosen

The crowding was in the vegetable, fresh fruit and meat departments.

In Abu Dhabi, sales outlets and cooperatives witnessed a great crowd on the night and the first day of Ramadan, for the purchase of food and consumer goods.

A field tour of "Emirates Today" in a number of outlets showed that the procurement operations focused on food commodities, as the congestion was in the departments of selling vegetables and fresh fruits, meat and dairy products, some basic commodities and goods for Ramadan, and the payment boxes witnessed a great congestion in some outlets. This resulted in a lack of safe spaces between shoppers.

On the other hand, two officials in outlets confirmed that the outlets are monitoring the situation and are ready to take the necessary measures in the event of crowding continues, pointing to the use of employees who raised signboards asking consumers to observe safe distances, and also called for shopping at times that are not without crowding.

In detail, the consumer, Sheikha Al-Mansoori, said that she faced great congestion on the night of Ramadan during the purchase of her basic needs from one of the major sales outlets, especially in light of the commitment of the outlets to make discounts on a large number of goods, explaining that the congestion focused on food commodities, specifically the vegetable and fresh fruit sections. Especially since it is one of the most consumed commodities during Ramadan, as there were a large number of shoppers at very close distances.

He explained that crowding was concentrated in the departments of selling meat, dairy products and milk, which are the commodities that are frequently used during Ramadan, pointing out that the port officials ignored the regulation of the presence of consumers in these sections.

The consumer, Amani Muhammad, said that some outlets witnessed a remarkable congestion on the first days of Ramadan, and the absence of any safe distances amid neglect to regulate the entry of shoppers, noting that the crowding included the vegetable, fruit and dairy products sections and the places of basic commodities that have big discounts, and the outlets also witnessed Long lines for checkout.

She called for organizing entry into the outlets to avoid congestion and organizing the number inside the outlet departments, while adhering to the precautionary measures, noting that some shoppers volunteered to warn to observe the spacing and to stand at the indicative signs.

For his part, an official in one of the major sales outlets in Abu Dhabi, Muhammad Al-Asaad, said, “There is a great demand from shoppers to buy, especially the vegetable, meat, dairy and milk products and commodities that have large discounts,” explaining that the port is committed to the capacity of the port as a whole, but It is difficult to control the entry of consumers into certain departments.

He explained that the port administration is monitoring the situation first-hand, to ensure the existence of safe distances, in order to take the necessary measures in the event of crowding, such as organizing queues outside the port or determining the number allowed to enter certain sections, if necessary.

An official at another port, Othman Ismail, said that «the major reductions of the outlets supported the purchase and sales operations at the beginning of Ramadan and immediately before it», stressing that the outlet is ready to implement any additional measures if required, during the coming days, to ensure the existence of safe distances, indicating that the outlets Many have made early discounts on a large number of goods so that crowding does not occur immediately before or in the early days of Ramadan.

He called for cooperation from shoppers to ensure safe distances, especially as there are circuits on the ground that define where consumers will stand. He also called for shopping at times when there is no congestion.

He said that the outlet hired employees who raised instructional signs asking consumers to respect safe distances to protect themselves and others.

Retail expert Ibrahim Al-Bahr said that "the many discounts encouraged shoppers to buy during the period leading up to and first of Ramadan."

Al-Bahar called on sales outlets to put up informative and awareness signs in various places, especially those that are crowded to educate consumers about the need for safe distances, and he also called for the return of temperature detection devices to the outlets again to provide greater protection for shoppers.

He stressed the need for shoppers to take into account the existence of safe distances and adhere to the precautionary measures, noting that the responsibility is shared between the two sides.