Jia Yueting's return to China was added 240 million yuan, and he was banned from the stock market for life

Chinanews client, Beijing, April 14 (Reporter Zhang Xu) "Returning to China next week" Jia Yueting recently received a high-priced ticket, making his journey back to China more variable.   According to an announcement by LeTV on the evening of April 12, Beijing Securities Regulatory Bureau imposed a fine of 240.6 million yuan on LeTV and 241.2 million yuan on Jia Yueting due to fraud. In additi 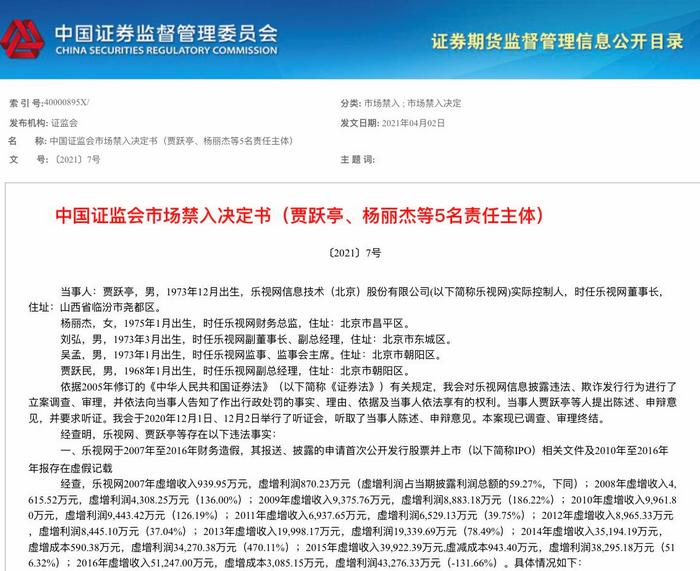 According to an announcement by LeTV on the evening of April 12, Beijing Securities Regulatory Bureau imposed a fine of 240.6 million yuan on LeTV and 241.2 million yuan on Jia Yueting due to fraud.

In addition, according to the news on the website of the China Securities Regulatory Commission on the 13th, Jia Yueting’s illegal circumstances were particularly serious.

There is no news of Jia Yueting's return to China. How Jia Yueting pays the fine and the prospects of the FF market he created are full of uncertainties.

According to the "Administrative Punishment Decision", LeTV and Jia Yueting were fined by the China Securities Regulatory Commission for the following two reasons.

Announcement of LeTV on the receipt of administrative penalty decision.

One is because LeTV’s financial fraud from 2007 to 2016, the documents submitted and disclosed for the initial public offering and listing, and the 2010-2016 annual report contain false records. Jia Yueting is the actual controller of LeTV. The total fine was 900,000 yuan.

In addition, in response to the fraudulent issuance of LeTV's non-public offering in 2016, according to Article 189 of the "Securities Law", LeTV was fined 5% of the funds raised, or 240 million yuan.

As the actual controller of LeTV, Jia Yueting instigated the above-mentioned illegal acts and was fined a total of 240.3 million yuan.

LeTV’s fraud has shocked the industry for ten consecutive years. However, Jia Yueting, who has excellent psychological quality, denies this.

According to a report from China Central Broadcasting Corporation in 2017, more than a dozen former members of the Issuing Examination Committee of the China Securities Regulatory Commission were arrested, which involved the issue of LeTV’s IPO that year.

At that time, Jia Yueting said, "This is a case that has nothing to do with LeTV." "LeTV's IPO is 100% without fraud."

Now that the Dongchuang incident occurs, everyone wants to know: What responsibility does Jia Yueting have for the related violations that have been identified?

How should the ticket be enforced?

Jia Yueting has not returned to China so far. In this case, how should the sky-high ticket be executed?

Zhou Hao, a lawyer at Beijing Weiheng Law Firm, said, “Normal administrative penalties include auctions of seized property, transfer of frozen funds, application for court enforcement and other measures. However, because Jia Yueting’s soaring fine was not in China for many years, it is still unclear how to enforce it. ."

But what is certain is that this ticket will add a lot of variables to Jia Yueting's journey back to China.

Why did the stock price of LeTV, which got the ticket, soar?

Although LeTV has delisted from the A-share market, its share price has been rising since it entered the national SME share transfer system on February 3, 2021.

As of the 13th, the share price of "LeTV 3" was reported at 0.48 yuan per share, while LeTV reported at RMB 0.18 per share on the last trading day of A shares. The stock price was nearly three times the original price.

The share price of LeTV 3 has been trading at a limit all the way, and the share price is nearly three times that of the original price.

The picture comes from a straight flush.

Why did the stock price of LeTV, which has suffered huge losses, rise all the way?

The industry believes that the reason lies in the optimistic expectations of some investors for Jia Yueting and FF.

Prior to this, Jia Yueting publicly stated that a proportion of no more than 10% has been reserved in the creditor’s trust, which is mainly used for contingent compensation of LeTV stockholders. It can be implemented after the relevant legal procedures are fulfilled. A special team will be arranged to coordinate LeTV. Compensation issues for shareholders.

Therefore, whether LeTV shareholders can be compensated, the key lies in the market prospects of FF.

According to Jia Yueting's application for bankruptcy and reorganization in 2019, Jia Yueting's creditors will directly become shareholders of FF.

FF has already submitted S4 listing documents to the US Securities Regulatory Commission on April 5, and it will land on the capital market in May as soon as possible.

The currently disclosed S4 listing documents show that FF will deliver the first mass-produced electric vehicles in 2022, and the delivery volume will exceed 450,000 by 2025.

In addition to the long-established FF91, FF has also developed two models, the FF81 and FF71. The three products are aimed at the ultra-high-end, high-end mass and general markets.

Since 2021, FF has been moving continuously. Whether it is the continuous progress of mass production or frequent personnel changes, it seems that Jia Yueting is one step closer to the realization of the car dream.

Although the listing of FF is imminent, there are hidden worries in the way of listing through SPAC.

Industry insiders pointed out that the reason why companies choose SPAC listings is generally because they fail to meet the requirements of traditional IPOs.

In other words, even if FF is listed in a special way, it must be implemented in terms of performance in order to be recognized by the capital market.

After all, FF has not yet achieved delivery and has not accepted the market test.

Returning to the FF car itself, Tesla, which delivered nearly 500,000 vehicles last year, has already made the mark. The car delivery data of the new car-making forces of the Big Three is also booming, and the hematopoietic ability is gradually climbing. FF's first mass-produced model FF91 has changed from The schedule has fallen behind, not to mention its price of as high as $200,000, which is enough to scare many people away.

Although FF has made a bold statement of delivering 450,000 vehicles in 2025, the industry does not look good on it.

Cui Dongshu, secretary-general of the Travel Federation, told a reporter from Chinanews.com: “The FF91 project was established very early. Although it has recently announced the adoption of NVIDIA’s new computing technology, it may still fail to keep up with the times, and the price is too high, and the sales volume will not be much, which is difficult. Amortize research and development expenses."

Zhang Xiang, an analyst in the automotive industry, said bluntly that it is basically impossible for FF to deliver 450,000 units in 2025.

Zhang Xiang said: "FF91 is priced as high as US$200,000, which is equivalent to Ferrari Lamborghini. These supercars can only sell hundreds of thousands a year. With FF's market popularity, sales cannot exceed these brands." He also It was pointed out that the threshold for ultra-luxury models is extremely high. The price of future cars in the new car-making forces is around 500,000-700,000 yuan, but the delivery volume is negligible and can only be closed in the end.

Its listing documents show that as of the end of 2020, FF's book cash is only 1.124 million U.S. dollars, and the company has not yet confirmed any income.

"Ultra-high pricing is a means that Jia Yueting hopes to attract capital and media attention, with the purpose of further financing. Because labor costs and factory costs are high, but the sales of FF91 are destined not to be very large. If further financing is not possible, it will be like Many new car-building forces shut down like this, and the reality is cruel.” Zhang Xiang thinks.

In this way, the creditors of LeTV have been hoping for the success of FF to compensate for the losses, and this possibility seems to be a little smaller.