0.4%! After two consecutive months of falling, why did the CPI turn from negative to positive year-on-year?

Chinanews client, Beijing, April 9th ​​(Reporter Xie Yiguan) According to data released by the National Bureau of Statistics on April 9th, in March 2021, the national consumer price (CPI) rose 0.4% year-on-year, from negative to positive. CPI ups and downs chart. From the National Bureau of Statistics March CPI rose slightly year-on-year   Entering 2021, the CPI has been in a negative range 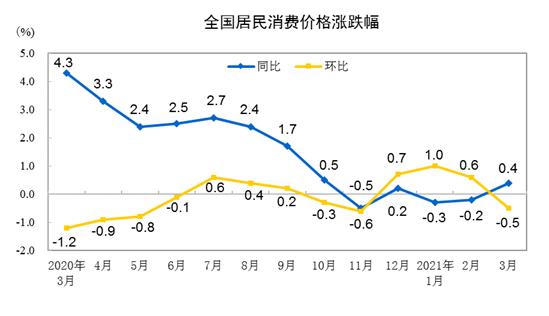 Entering 2021, the CPI has been in a negative range for two consecutive months year-on-year. Why will it turn from negative to positive in March?

"Due to the significant weakening of the negative impact of the tail-raising, the CPI went from a 0.2% decline last month to an increase of 0.4%." said Dong Lijuan, a senior statistician in the City Department of the National Bureau of Statistics.

In addition, non-food prices changed from a 0.2% decline last month to an increase of 0.7%, affecting the CPI increase by about 0.56 percentage points.

"Among non-food products, the price of industrial consumer goods rose by 1.0%, the first year-on-year increase in the past year, mainly driven by the 11.9% and 12.8% rises in gasoline and diesel prices; the price of services changed from a 0.1% drop in the previous month to a 0.2% increase." Dong Lijuan said.

"According to estimates, of the 0.4% year-on-year increase in March, the carry-over impact of last year's price changes was approximately -0.6 percentage points, which was 1.2 percentage points less than the previous month, and the impact of the new price increase was approximately 1.0 percentage point." Dong Lijuan pointed out. , The core CPI excluding food and energy prices changed from flat last month to an increase of 0.3% year-on-year, and the core CPI in the first quarter was flat with the same period last year.

Judging from the data and interpretation published by the National Bureau of Statistics, the main reason for the decline in prices of major "vegetable basket" products is one after another.

In addition, consumer demand dropped after the Spring Festival, and the prices of beef, mutton, chicken, duck, aquatic products and fresh fruits all changed from rising to falling, with a decrease of 0.2%-1.7%.

A reporter from Chinanews.com recently visited supermarkets and vegetable markets in Beijing and found that the prices of pork and vegetables have fallen significantly.

In a supermarket in Xicheng District, Beijing, in late March, the front and rear tip of the pork fell to 21.8 yuan a catty, and the pork belly fell to 26.8 yuan a catty.

Due to the launch of spring vegetables, the prices of many kinds of vegetables such as beans, peppers, and leeks have fallen.

CPI may rise in the second quarter

According to the monitoring of the country’s 500 county fairs and collection points by the Ministry of Agriculture and Rural Affairs, in the first week of April, the national average pork price was 42.53 yuan/kg, a decrease of 3.5% from the previous week and a year-on-year decrease of 23.7%.

"Although production has returned to normal and supply is sufficient, food prices are declining, but due to the impact of global commodity prices pushing up the prices of some consumer goods, the CPI in April may have expanded year-on-year or compared with March, which also drove the CPI in the second quarter. There was an increase in the first quarter." Cao Heping, a professor at the School of Economics of Peking University, told a reporter from Chinanews.com.

According to Xu Dongshi, a macro analyst at Galaxy Securities, “Although the economy is recovering, the level of price carry-over will continue to decline. The first quarter of 2021 will be a low point. The CPI will rise again in the second quarter of 2021, and then gradually fall. Service prices will go up. Difficulties, other food prices are stable, and CPI will run at a low level in the future.” (End)