China-Singapore Jingwei Client, April 6th (Zhang Meng) The Ching Ming file for the Year of the Ox is quite a "bull". According to the data of the Beacon Professional Edition, as of 24:00 on April 5, the box office of the Ching Ming file in 2021 (April 3 to April 5) exceeded 820 million and 22.25 million people watched the movie. How much did you contribute?  The box office of Qingming Festival 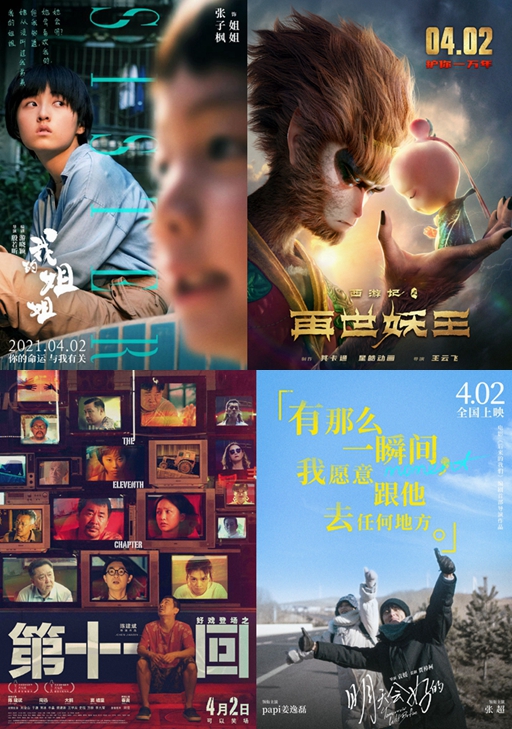 China-Singapore Jingwei Client, April 6th (Zhang Meng) The Ching Ming file for the Year of the Ox is quite a "bull".

According to the data of the Beacon Professional Edition, as of 24:00 on April 5, the box office of the Ching Ming file in 2021 (April 3 to April 5) exceeded 820 million and 22.25 million people watched the movie. How much did you contribute?

This year's Qingming file, a total of 4 domestic films including "My Sister", "Eleventh Time", "Tomorrow Will Be Alright", "Journey to the West: The Demon King" were released, genres covering plot, comedy, love, animation, etc.

According to the data of the Beacon Professional Edition, from 2017 to 2019, the box office of Qingming Festival was 591 million, 687 million, and 698 million, respectively.

Due to the epidemic in 2020, the Qingming file is vacant.

The first Qingming file after the epidemic in 2021, the box office exceeded 820 million, and 22.25 million people watched the movie. Both the box office and the number of movie viewers reached a record high.

Zhu Zhu, an analyst at Guohai Securities Media, told reporters from Sino-Singapore Jingwei that Ching Ming is a small period, and the films are not high-cost works. The higher box office results are also content-driven results.

After the epidemic, the demand for movie viewing still needs to be boosted by high-quality content.

Talking about the performance of this year's Qingming file, Liu Yan, the chief analyst of Southwest Securities Media, said frankly that the overall quality of domestic films has increased significantly this year, and films that resonate are the key to success.

"My Sister" becomes the champion of Qingming file

To become the box office champion of Qingming file.

"My Sister" tells a family story about a sister who has lost her parents, facing the issue of pursuing an independent life or raising her younger brother.

The siblings, who grew up in a patriarchal family environment, were originally indifferent and alienated. After accidentally losing their parents, the responsibility of raising their younger brother fell on the older sister who wanted to go to Beijing for the postgraduate entrance examination.

In the constant tearing between family bondage and personal pursuit, my sister re-realized the meaning that blood is thicker than water in the depths of family relationship.

The ratings of "My Sister" on Maoyan and Taopiao.

According to word-of-mouth, the box office champion film "My Sister" was scored high by netizens on many platforms, with Maoyan's ticket purchase rating of 9.0 and Taopin's rating of 8.8.

Yin Hong, vice president of the Chinese Film Critics Society, vice chairman of the Chinese Film Association, and professor of Tsinghua University, told reporters from Sino-Singapore Jingwei that, in addition to the previous "Send You A Little Red Flower", human affection has always been an important theme of the film. On the other hand, the quality and intensity of the creation of this kind of movies have been significantly improved; on the other hand, the audience has also begun to shift from watching spectacles to watching people and stories, pursuing resonance, empathy, and sharing.

In an interview with the China-Singapore Jingwei reporter, Mo Zheng, the screenwriter and writer of "Crazy Film Circle", pointed out that movies are a vehicle for expression of emotions. Previously the subject matter was mostly limited to love between men and women. In fact, as long as it is true feelings and realistic expressions, it can be one A good movie.

"Sister" is also a complex in many people's hearts. This kind of affectionate family and drama films have been on the rise in recent years, and they are more grounded than those popcorn commercial films.

In addition, the title is simple and clear, including many classic songs and books in the past, which have similar emotional sustenance, which can easily arouse people's interest in watching movies.

There are these listed companies behind the Qingming file

Behind the Qingming file is the competition of many listed companies.

Public information shows that the producers of "My Sister" include Hengdian Film and Television, Chinese Film, Maoyan Entertainment, and Ali Pictures.

"Journey to the West: The Reincarnation of the Demon King" is behind Chinese movies and Maoyan Entertainment.

The producers of "Eleventh Time" include Maoyan Entertainment and Chinese movies.

"Tomorrow will be good" is the investor of Guangguang Media.

Zhu Zhu believes that due to the holiday effect, the supply of high-quality content has pushed the box office to show a schedule effect.

However, the Ching Ming period is relatively short, and its effect on the box office is not as good as the Spring Festival file. If there are dark horse movies in the next 51 files, it can also be expected to pull the schedule.