The Ministry of Economy stated that the total amount allocated to support offers of Ramadan discounts exceeds 400 million dirhams, noting that 894 outlets in various emirates of the country participate in these offers with discounts ranging between 25 and 75%. The ministry, during a media briefing yesterday, stated that it would implement 420 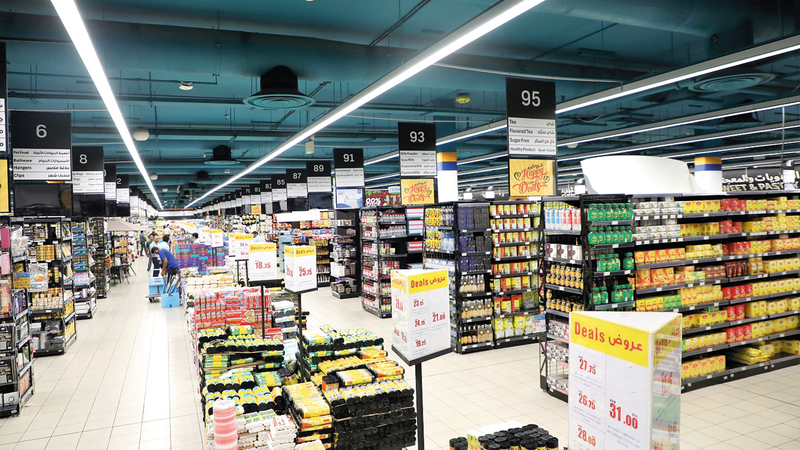 “Al-Eqtisad”: With the participation of 894 outlets, with discounts of up to 75%

The Ministry of Economy stated that the total amount allocated to support offers of Ramadan discounts exceeds 400 million dirhams, noting that 894 outlets in various emirates of the country participate in these offers with discounts ranging between 25 and 75%.

The ministry stated, during a media briefing yesterday, that it will carry out 420 inspection rounds during Ramadan, to ensure the abundance of goods and price stability, stressing that it did not allow the price of any commodity to be raised during the past year.

In detail, the Director of the Competition and Consumer Protection Department at the Ministry of Economy, Marwan Al-Sabousi, said that “894 outlets in various parts of the country have already started offering discounts offers for the next Ramadan season, at rates ranging between 25 and 75%,” indicating that some outlets offer discounts on About 30 thousand items.

Al-Sabousi added, to "Emirates Today", on the sidelines of a media briefing held by the ministry in Dubai yesterday, about consumer protection measures in the UAE and the preparations and efforts made to receive the month of Ramadan, that "the total value of allocations to support Ramadan discounts offers exceeded 400 million dirhams." These discounts will include various outlets, as well as e-commerce platforms, whether independent or affiliated with outlets.

Al-Sabousi expected that e-commerce platforms will witness a large increase in turnout before and during the month of Ramadan, calling on consumers not to focus on shopping only on outlets, but to merge with purchases through electronic platforms to avoid congestion in the outlets.

Al-Sabousi revealed that the ministry aims to implement 420 inspection rounds in various state markets during Ramadan, to ensure the abundance of goods and price stability in the various food and consumer sectors.

He said that «the ministry held meetings with representatives of the vegetable and fruit markets in both Dubai and Abu Dhabi, where it was agreed to provide the necessary quantities of vegetables and fruits in preparation for the holy month».

Al-Sabousi explained that "the daily import rate of vegetables and fruits in the Dubai market will reach about 17 thousand tons during the Ramadan season, while the import of Abu Dhabi merchants will reach about 5000 tons," pointing out that the total volume of the currently available stock of vegetables and fruits in the two markets is about 130 Thousand tons.

Al-Sabousi confirmed that the ministry did not approve any requests related to raising the prices of goods by the supply companies during the whole past year, while it has only allowed since the beginning of this year a limited increase that did not exceed 5% on two commodities after verifying the real justifications and documents proving the change in commodity prices from Countries of origin according to repercussions related to the "Corona" pandemic.

He pointed out that there are many alternatives with high competitiveness and diversification in supplying various commodities to the country's markets.

Al-Sabousi explained that the total number of inspection tours carried out by the ministry and local departments in various state markets during the past year reached 139 thousand and 190 rounds, including 15 thousand and 542 rounds for consumer protection, which include checking the identification cards of goods, fixing prices, and placing stickers. The price and quality control of goods, while the other rounds were divided into the categories of "commercial fraud", "trademarks", "copyright" and "inspection of factories and commercial agencies."

He indicated that with regard to the first quarter of this year, the total number of tours reached about 615, including 282 tours for consumer protection.

In turn, the Director of Marketing and Happiness Department at Union Coop, Dr. Suhail Al-Bastaki, said, “All cooperatives outlets, which number 17 cooperatives, have 160 branches, will offer promotional offers for the month of Ramadan, including about 40,000 items with discounts ranging between 25 and 75%. In addition to the subsidized Ramadan basketry offers.

In a speech on behalf of the Consumer Cooperative Union, Al-Bastaki added, "Sales of consumer cooperatives during the past year increased to more than seven billion dirhams, while the number of shareholders in cooperatives reached 84,478 shareholders." By the end of this year, to 195 branches.

For his part, the public relations official at Lulu Centers Group, Hassan Muhammad Al-Marzouqi, stated that the group has allocated 40 million dirhams to support the offers and discounts of the Ramadan season, which will include about 30 thousand goods in the group’s 90 branches nationwide, indicating that the offers will include discounts ranging Between 25 and 70% on different items.

The Director of the Competition and Consumer Protection Department at the Ministry of Economy, Marwan Al-Sabousi, said that “the administration, in cooperation with competent authorities, was able to solve 1,412 complaints it received from consumers in various emirates of the country, during the first quarter of this year”.

He revealed that «the ministry intends to present an initiative to standardize consumer complaints procedures at the state level, in partnership with the competent authorities, with the aim of providing the best services to make customers happy, by focusing on reducing service procedures and reducing the time required to end them.

Al-Sabousi explained that “the total number of commodity recall cases since January 2021 until now has reached 33,725 commodities,” indicating that the categories of cars and electronic devices accounted for the largest percentage of the total recalled goods, with 29,897 cars recalled, while the total electronic devices reached The summons are about 2,158 devices, in addition to 1670 recall cases for cosmetics.

• Implementation of 420 inspections to ensure price and commodity stability.

• 22 thousand tons of vegetables and fruits will be supplied to the Dubai and Abu Dhabi markets every day during Ramadan.