Yesterday, "Union Coop" and "Carrefour Emirates" announced the allocation of more than 205 million dirhams to support Ramadan discounts offers, including sales of about 70 thousand commodities, at rates ranging between 25 and 75%. During a press interview I held yesterday, she spotted 175 AD 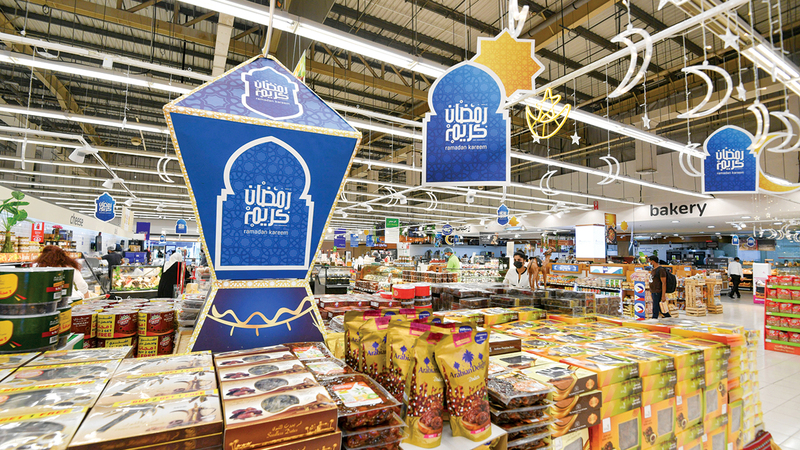 Includes 70 thousand items and discounts of up to 75%

"Union Coop" and "Carrefour Emirates" announced yesterday that they have allocated more than 205 million dirhams to support Ramadan discounts, including discounts on about 70,000 items, at rates ranging between 25 and 75%.

"Union Coop" confirmed, in statements during a press interview held yesterday, that it had allocated 175 million dirhams to support the reduction of the prices of 30 thousand products as part of the Ramadan discounts offers.

At a time when «Carrefour Emirates» revealed in another press interview that it has invested 30 million dirhams to reduce about 40 thousand commodities in 108 sales outlets before and during the month of Ramadan.

In detail, the CEO of "Union Coop", Khaled Hamid bin Theban Al Falasi, said that the "cooperative" allocated an amount of 175 million dirhams to support price reductions of 30 thousand commodities during Ramadan offers, pointing out that the goods included in the reductions include 20 thousand food commodities, in addition to To 10 thousand non-food consumer and household goods.

He added, in statements, during a press interview held yesterday, that "the allocations allocated for the next Ramadan season exceed the allocations of the previous season by 15 million dirhams."

Al Falasi indicated that the Ramadan discounts offers began on March 25th, and will last for 60 days, with discounts ranging between 25 and 75% at 20 "Union Coop" outlets in various regions of Dubai.

He revealed that «Union Coop» will provide four outlets to operate on a 24-hour system, compared to three outlets last year, pointing out that these outlets will be in the areas: (Umm Suqeim, Al Warqa, Al Wasl and Al Tawar)

Al-Falasi confirmed that the Union Coop has witnessed a growth in demand on its electronic platform, by up to 3.5% since the beginning of this year, stressing that the platform will include offers on about 1500 products.

Al-Falasi stressed that the Union Coop will implement plans to maintain precautionary safety standards and procedures during the Ramadan promotion campaigns, indicating that it has completed vaccination operations for more than 3000 employees in its sales outlets and departments, with the vaccine against the "Covid-19" virus, and by 100% of the forces. Working cooperative.

In the context of Ramadan discounts offers, the director of the "Carrefour Emirates" chain of stores, owned and managed by "Majid Al Futtaim Retail Company", Philip Bajioun, said that "the company has invested an amount of more than 30 million dirhams to support the offers of the Ramadan season discounts, which will include about 40 thousand ». Goods in 108 stores in the UAE, 46 of which are in Dubai.

He added that "the discounts offers that started at the end of last March, and continue throughout the month of Ramadan, include discounts ranging between 25 and 70%," stressing that the discounts will include e-commerce platforms affiliated with "Carrefour".

He explained that "Carrefour" will offer discounts of 35% on specific goods as part of its Ramadan offers, as part of the "One Day ... One Offer" initiative, as well as awarding rewards on points from the "Share" program.

He said, “An initiative will be launched to motivate customers to buy local products, by offering 25% cashback on SHARE points when purchasing fresh, chilled and frozen Emirati products every Monday, giving customers the opportunity to choose organic and healthy products, and at the same time provide support. To farmers and local suppliers ».

Begijun revealed that the management of "Carrefour" will provide two categories of Ramadan baskets at prices of 50 dirhams or 100 dirhams, and that includes products bearing the "Carrefour" trademark.

He also referred to the administration's renewal of its partnership with the Emirates Red Crescent Authority, to provide the opportunity for customers to donate baskets that contain long-term basic food supplies such as pasta, rice and cooking oil, allowing the opportunity to feed more than 25,000 people.