"You are crushed by someone", but your privacy has been taken away

Chinanews client, Beijing, March 30th (Reporter Wu Tao) You never know what role you play in other people's text messages or APP pushes.   Sometimes it’s someone who has a crush on you; sometimes it’s you sullenly adding someone as a friend; sometimes you become a corporate executive and invite others to join the group. The scary thing is that these text messages can accurately display your rea 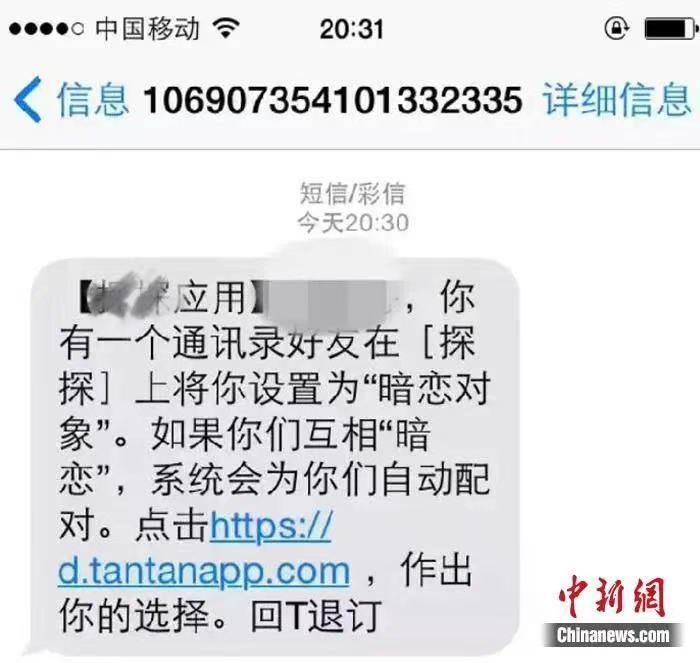 Sometimes it’s someone who has a crush on you; sometimes it’s you sullenly adding someone as a friend; sometimes you become a corporate executive and invite others to join the group.

The scary thing is that these text messages can accurately display your real name or your friend's name.

The user's real information is used casually for marketing

Recently, many users reported to reporters of Chinanews.com that they received "terrible" text messages, "The text messages accurately stated my real name and claimed that someone had set me as a crush partner. In fact, I have never registered for this. APP, how to set me up? But the text message shows my real name again."

The mosaic area is the real name of the user.

Similar situations are not uncommon. Some netizens said that they received similar text messages from social software such as Maimai and Momo.

The content is "Your friend XX has set you as a crush", XX waits for 2 colleagues to join XX, click to join, "XX has added you as a friend three times in a row", XX, your company will give you advanced permissions "and so on.

The content of the text messages are inconsistent, but they all have one thing in common: they accurately display the user's real name and make up some "unnecessary" things.

Even on WeChat, some users said, "I often receive push notifications showing that our company (real name display) has joined the corporate WeChat group, or showing how many colleagues such and such are already in the group and invited me to join. The enterprise WeChat group owner, he said he never invited me."

Recently, "Gongxin Weibao" published the "Inventory of Spam Complaints in the Fourth Quarter of 2020". In the "Who is Sending Spam Messages", the social domain is mainly Lianxin and Tantan.

Users are still embarrassed by harassment, experts say it is infringement

Is this kind of infringement of using real-name information marketing?

Zhao Zhanzhu, a lawyer at Beijing Yunjia Law Firm and a special researcher of the Intellectual Property Research Center of China University of Political Science and Law, said in an interview with a reporter from Chinanews.com that “this behavior constitutes an infringement of users’ privacy rights without the user’s consent.”

In reality, the court has already judged related cases.

According to an information published by the “Beijing Haidian Court” public account in February, the Maimai website sent SMS messages to the plaintiff in the name of a friend (by directly calling his name and saying that a former colleague marked him, how much A friend is waiting for her to join), Maimai was judged by the court to violate her privacy.

The mosaic area is the real name of the user.

In fact, there are still a large number of netizens who have no idea about being marketed as "chess pieces" by companies.

When interviewed by a reporter from Chinanews.com, some users expressed disgust at similar text messages or push notifications, “It’s okay if you don’t know, but I feel embarrassed after knowing it. It's like, but it doesn't actually exist."

"Whenever I receive a secret love text message from Tantan or Momo, I know that another lonely man or woman has signed up for this software, causing his address book friends to tolerate this harassing text message." Some netizens said.

In response to the illegal collection and use of personal information by the App, the relevant departments have also made heavy lifting and continued rectification.

The above regulations also clarify that APP shall not refuse users to use its basic functions and services because users do not agree to provide unnecessary personal information.

Corporate response: will continue to optimize products and services

Regarding the marketing of users' real names, the reporter contacted companies such as Momo and Tantan.

Momo responded by the user's nickname, such as "Hu Ge".

As of press time, Tan Tan has not responded to this.

Maimai told a reporter from Chinanews.com that the company has voluntarily fixed related issues on the Maimai APP in 2019 and will no longer send similar text messages to non-registered users. Maimai will protect user privacy and data security as all work. The premise is to continuously optimize products and services.

The real name of the user is in the red box.

Have you encountered this kind of text message harassment, have you complained?