In one day, the market value of Nike and Adidas evaporated 73.3 billion

Chinanews client, Beijing, March 26 (Reporter Xie Yiguan) Due to the boycott of Xinjiang cotton (products), Nike and Adidas, which are on the hot search, have also encountered investors' "voting with their feet" in the capital market. The stock price plummeted, and the total market value evaporated about 73.3 billion yuan   On March 25, local time, Nike's stock price fell sharply at the openin 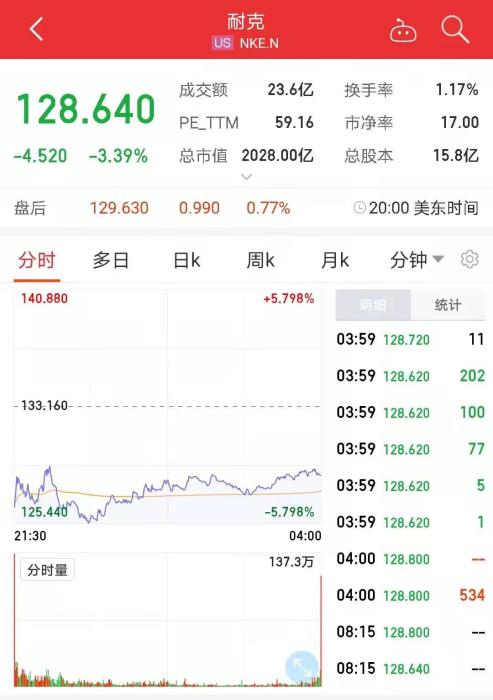 Chinanews client, Beijing, March 26 (Reporter Xie Yiguan) Due to the boycott of Xinjiang cotton (products), Nike and Adidas, which are on the hot search, have also encountered investors' "voting with their feet" in the capital market.

The stock price plummeted, and the total market value evaporated about 73.3 billion yuan

On March 25, local time, Nike's stock price fell sharply at the opening, and it fell more than 5% at the beginning of the market, and Adidas' stock price also suffered a severe drop.

In other words, the combined market value of Nike and Adidas has lost approximately RMB 73.3 billion in one day.

Why did the stock prices of Nike and Adidas fall?

Some research institutions pointed out that this is related to international brands such as H&M, Nike and Adidas spreading rumors, slandering and even discrediting and boycotting Xinjiang cotton (products) based on lies and false information.

On the 24th, a "H&M boycott of Xinjiang products" statement on H&M's official website continued to ferment on the Internet, triggering the entire network to resist H&M, and e-commerce platforms, application stores, and map apps have been removed from H&M.

But then, some netizens discovered that Nike, Adidas, Uniqlo and other foreign companies held the same position as H&M.

To make matters worse, Nike and Adidas also required their suppliers not to use any textiles and processed products from Xinjiang, which triggered public outrage: "Foreign companies cannot eat Chinese food while smashing Chinese bowls! "

To discredit Xinjiang Cotton, artists have terminated their contracts with Nike and Adi

With the fermentation of the incident, many entertainers who have cooperated with related brands have issued statements to draw a line between Nike and Adidas.

On the morning of March 25, Lehua Entertainment issued a statement on its official Weibo that the company’s artist Wang Yibo had terminated all cooperation with the NIKE brand.

Subsequently, the artist Tan Songyun Studio's official Weibo announced that Tan Songyun had terminated all cooperation with the NIKE brand.

On the afternoon of the 25th, artists Bai Jingting, Ouyang Nana, and Zhang Yixing also issued a statement announcing the termination of cooperation with Nike's sub-brand Converse.

"According to the company's financial report data, mainland China accounts for about 20% of NIKE's global sales. If relevant international brands refuse to repent, it will have a greater negative impact on their sales in the Chinese market." CITIC Securities said in a research report.

How much influence does the Chinese market have on Nike and Adi?

Some analysts pointed out that Nike's revenue growth was entirely attributable to the growth of the Greater China market, helping it offset the 10% decline in North American revenue and the 45% impact of closing stores in Europe, the Middle East and Africa.

In the third fiscal quarter, Nike's revenue in Greater China increased by 51% year-on-year to $2.279 billion.

The contribution of the Chinese market to Nike's revenue is not only reflected in a single fiscal quarter.

According to media reports, in the 2019/2020 fiscal year, Nike’s sales in Greater China rose 8%, achieving growth for the sixth consecutive year.

The influence of Greater China on Adidas is also not to be underestimated.

Among them, the fourth quarter sales in Greater China achieved a 7% growth.

In view of the consumption potential in Greater China, Adidas announced that it will report financial data separately from 2021.

In its new strategy for 2020-2025, Adidas will also list Greater China as one of the three key strategic markets, and it is expected that in the next few years, the Greater China market will become the fastest growing sports goods market in the world.

"I used Adinike for many years before, and I will replace it with Li Ning Anta in the future." Some consumers said that the pure white and flawless Chinese cotton should not be discredited.

While the stocks of Nike and Adidas have encountered investors' voting with their feet, the share prices of many Chinese clothing brands have ushered in sustained surges.

On the 25th, A-share Chinese apparel and textile stocks strengthened one after another.

On the same day, stocks such as Smith Barney Apparel, Industrial Technology, and Ribo Fashion had their daily limit, and Langsha, Sevenwolves, Hailan House, and Nanshan Zhishang also rose sharply.

In the early trading on the 26th, China's apparel and textile stocks continued to rise sharply.

On the news, Anta Sports has announced on the 24th that it will start relevant procedures to withdraw from BCI (Swiss Better Cotton Development Association).

Li Ning said that he is not a member of the BCI organization and has never joined.

On the 26th, Li Ning also announced the artist Xiao Zhan as his global spokesperson.

"Sustainably pay attention to the progress of events and the trend of public opinion, and grasp the opportunities for the rise of domestic brands." CITIC Securities pointed out in the research report.