Off the shelf! Boycott the whole network! H&amp;M, no one pays for your absurdity 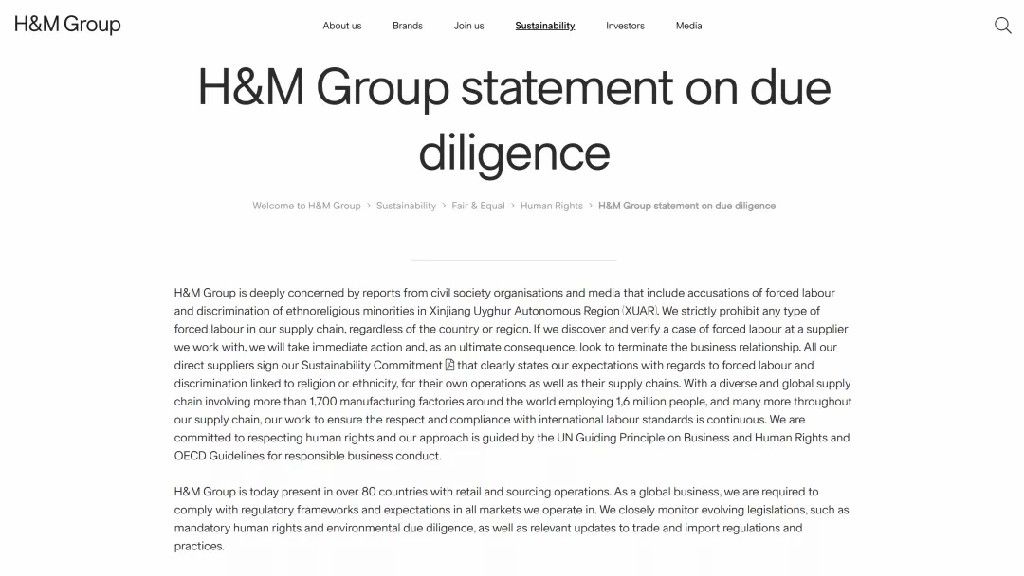 The H&M statement reads: H&M Group is deeply concerned about reports from civil society organizations and media reports, including allegations of forced labor and religious discrimination against ethnic minorities in the Xinjiang Uygur Autonomous Region.

In the statement, H&M Group stated that we do not cooperate with any garment manufacturing factories located in Xinjiang, nor do we purchase products/raw materials from the region.

△ Screenshot of the statement

The Ministry of Foreign Affairs has already clarified the facts

Regarding H&M's approach, netizens said indignantly: While boycotting Xinjiang products, they want to make money from the Chinese at the same time?

The so-called "forced labor" and "discrimination against ethnic minorities" in Xinjiang are a complete lie. The Ministry of Foreign Affairs has clarified the facts many times.

On March 18, 2021, Chinese Foreign Ministry spokesperson Zhao Lijian stated that the so-called "forced labor" and "compulsory sterilization" and other "human rights violations" in Xinjiang are individual so-called scholars and institutions with ulterior motives deliberately fabricating and spreading big lies, contrary to justice and conscience. The Chinese people are strongly indignant.

Anyone who is willing to respect and understand China and does not have malicious or prejudice against Xinjiang should be vigilant and resist this.

H&M products off the shelves of multiple e-commerce platforms

Yesterday (March 24), many e-commerce platforms have removed H&M from the shelves.

Currently, searching for keywords such as H&M and HM on e-commerce platforms such as Taobao, JD.com, Pinduoduo, and Vipshop, no longer displays related stores and products.

In addition, a number of artists issued statements on the 24th, stating that they have no cooperation with the H&M brand.

H&M issued a statement in response that netizens did not buy it!

On the evening of the 24th, H&M responded to this matter.

However, this latest statement did not directly mention Xinjiang, nor did it apologize for smearing Xinjiang.

The statement stated that the H&M Group purchases more sustainable cotton through a globally certified third party. The purpose is to support cotton farmers around the world to adopt more sustainable methods to grow cotton.

H&M Group does not purchase cotton directly from any supplier.

In addition, H&M stated that regarding the management of the global supply chain, the group has always adhered to the principle of openness and transparency and does not represent any political stance.

For this statement issued by H&M, everyone did not buy it.

Many netizens criticized this statement for

"unintelligible" and "avoid the importance of the

In addition, after reading the statement, many netizens directly called H&M to "exit the Chinese market."

The truth is not difficult to clarify.

The spokesperson of the Chinese Ministry of Foreign Affairs made it very clear that the so-called "forced labor" in Xinjiang is a deliberately fabricated and spreading lie by so-called scholars and institutions with ulterior motives, which violates justice and conscience!

The facts are there. H&M neither sought verification from China nor went to Xinjiang to conduct field investigations. However, it listened to the facts and just sat on its ass. This is an

Indiscriminately, blindly decision-making, "theme" first, wearing colored glasses to see China, and issuing a statement that can not stand scrutiny, this is a

try to play a "righteous" hero, cater to anti-China forces, and to be an enemy of Chinese consumers in exchange for cheap applause, which is bound to be abandoned by the Chinese market

The H&M Group has both bet on the wrong treasure and made the wrong calculation. It must pay a heavy price for its wrong behavior.

Respect for facts, Chinese laws, and Chinese consumers should be the basic ethics of multinational companies.

You can't see the truth with colored glasses, and you can make accurate judgments only when you understand the full picture of the facts.