Officials of sales outlets and cooperative societies in the country reported that during the current week, they will offer discounts of up to 70% on many goods on the occasion of the month of Ramadan. For shoppers to shoppers 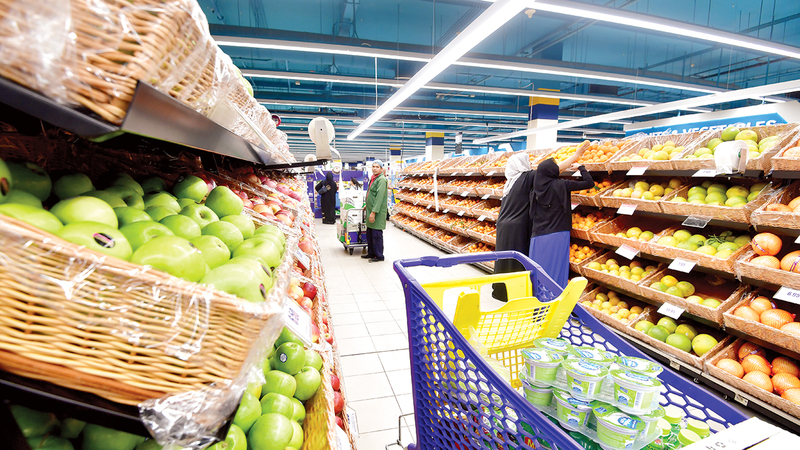 For direct or "online" shopping and avoid crowding, according to the precautionary measures

Officials of sales outlets and cooperative societies in the country reported that, this week, they will offer discounts of up to 70% on many goods on the occasion of the month of Ramadan.

They assured, "Emirates Today", that the offering will be early, through several campaigns of discounts, to allow shoppers to buy their needs early, and to avoid congestion in the outlets, indicating that the discounts will be available in the outlets, and for online shopping.

They explained that the discounts include the goods that are frequently used during Ramadan and Eid al-Fitr.

In turn, consumers emphasized that the early introduction of Ramadan discounts is one of the positive features in the market, which supports obtaining their needs of goods in sufficient time before the month of Ramadan, and to avoid congestion in the outlets.

In detail, the consumer, Yass Ahmed, said that "offering discounts offers early, longer before the month of Ramadan compared to the previous Ramadan season, one of the positive features that the market is witnessing during the current period, because it allows more time for families to shop and get their requirements in an adequate period."

The consumer, Ayman Ibrahim, pointed out that «the early launch of Ramadan discounts offers positively reflected on families, with the availability of these offers in the discounts of Ramadan goods and baskets, which allows consumers to prepare for the month of Ramadan, by buying at intervals without the need to accumulate sales outlets ».

The consumer, Shaima Awwad, added that she "prefers to buy for the needs of the month of Ramadan now, especially from goods that can be stored for a long time."

For his part, Deputy Director of the Abu Dhabi Cooperative Society for Operations, Abdullah Eid, said, “The association is offering, as of this 24th of this month, discounts of up to 60% on more than 1,000 products,” indicating that “several campaigns will be organized related to Ramadan, the first of which is before Ramadan. By more than two weeks, the second: throughout the month of Ramadan, through weekly and monthly performances, and the third: extending during Eid al-Fitr.

Eid added that "discounts will be offered early, to allow shoppers to buy Ramadan needs well in advance, and to avoid congestion." And Luqaimat, Femto, and others ».

For his part, the Director General of the Emirates Cooperative Society, Muhammad Yusuf Al-Khaja, said, "The association is preparing to launch three discounts campaigns on the occasion of the month of Ramadan, at rates ranging between 30 and 70%." Under the slogan (Welcome Ramadan), and includes discounts on about 1000 commodities, while the second campaign of discounts begins throughout the month of Ramadan, while the third campaign begins immediately after the end of Ramadan and extends during Eid al-Fitr.

He pointed out that "early launching (the cooperative) offers of discounts provides consumers with multiple options in terms of timing of purchase, with the variety of commodities included in each campaign for discounts between brands."

In turn, the Director of the Corporate Communication Department, the official spokesperson for the Lulu Group of Commercial Centers, Nanda Kumar, said, “The discounts for Ramadan begin on the 27th of this month, that is, more than two weeks before the month of Ramadan, to give shoppers an opportunity to buy their needs before the holy month arrives, and to avoid any Congestion, especially during the first days of Ramadan ».

Kumar explained that "the discounts will include more than 2000 commodities, ranging between 20 and 50% at least," explaining that "the reductions will include basic food commodities, which are frequently used in Ramadan, in addition to cooking utensils, electronics and home appliances."

He pointed out that the discounts for the group will be in the outlets and for online shopping, pointing out that sales are expected to grow during the coming Ramadan, amid expectations of increased demand for purchase, in light of the increasing number of vaccine recipients in the country, and the existence of a state of satisfaction among shoppers with the procedures. The precaution followed in the outlets.

In the same context, the Director of Happiness and Marketing Department at the Union Coop, Dr. Suhail Al-Bastaki, said that “(Union Coop) will offer six discounts campaigns related to the month of Ramadan, in order to avoid congestion, with full commitment to implementing precautionary measures and continuous sterilization of surfaces. The campaigns are formed according to Consumer needs, as the first campaign begins 20 days before Ramadan, to give consumers an opportunity to buy their needs without crowding, in addition to four discounts campaigns throughout the month of Ramadan, and each campaign lasts for a week, and the sixth discounts campaign extends directly during Eid al-Fitr.

Al-Bastaki explained that "the needs of consumers and the goods that they buy differ from one period to another, and therefore the sale commodities will differ from one campaign to another, and the discount campaigns will focus on the commodities of interest to consumers at each stage," adding that, for example, "consumers focus on purchasing quantities." Of food and consumer goods just before Ramadan, while purchases during Ramadan are focused on foodstuffs and meat, while purchases before Eid are focused on fruits, sweets, chocolates, nuts, clothes and others.

Al-Bastaki pointed out that the "Union Coop" is currently determining the percentages of the reductions permanently, indicating that the (cooperative) has reduced 10 thousand commodities during 2019, and about 10% of these commodities were reduced by 90% during the same year.

In turn, the general manager of Ajman Markets Cooperative Society, Sami Muhammad Shaban, said, "The association intends to raise the rates of discounts during the offers before and during the month of Ramadan to 70% on various food commodities."

He added that «the early launch of Ramadan discounts offers will yield positive benefits to consumers,» noting that «the Ramadan season, this year, compared to previous seasons, is characterized by high competition among outlets in the offers of discounts, which has strengthened the spread of early launches of discounts, compared to In the previous seasons, in addition to the high diversity of the offered offers and the covered goods.

In addition, the sales official at a well-known outlet in Abu Dhabi, Masoud Rafi, said that “(the outlet) intends to start offering discounts of up to 60% on more than 800 commodities, and it will start before the end of this week,” noting that “the reductions include basic commodities. The demand for them increases in Ramadan, such as: rice, flour, sugar, milk, tomato sauce, tea, meat, poultry, soup, vegetables and fruits, in addition to Ramadan goods such as: femto, loqaimat, cream, caramel and jelly, and it is expected that Ramadan will witness intense competition between sales outlets in order to stimulate sales.

Abdul Hamid Al-Khashabi, the spokesperson for the centers of the "Aswaaq Group", affiliated to the Dubai Government Investments Corporation, said that "the group has finally offered discounts for the month of Ramadan, and the rates of discounts ranged between 20 and 50%, while those offers included basic food commodities. Such as: edible oils, rice, canned foods, frozen and fresh foods, and consumer products.

He added that "the group started offering Ramadan discounts campaigns early, in order to allow consumers to purchase in stages for their needs during the holy month, without the need to congregate to buy the requirements of the Ramadan season", pointing out that "the current Ramadan season is characterized by greater competitive manifestations between outlets, what "Reflects positively on consumers, in addition to the remarkable response from the supply companies in cooperation, to provide the offer goods in a large and early period before the Ramadan season."

"Medium outlets will participate in Ramadan discounts to increase their sales," said the sales official at an average "supermarket" outlet in Abu Dhabi, Rahim Abdul Qadir, explaining that "(the outlet) will offer discounts on a number of goods at rates exceeding 40%."

He added that “what distinguishes the medium outlets is its proximity to the areas of concentration of population, and the ease of shopping,” noting that the last period witnessed the opening of a large number of “supermarkets” in the areas of large population agglomerations, which increased competition between different sales outlets for the benefit of consumers.

• Discounts are focused on products such as: rice, sugar, oils, fresh goods, meat and poultry.