The Federal Audit Office criticizes the plans for the EU reconstruction fund. He sees several sensitive points - including the fact that joint borrowing threatens to become a permanent facility. The risks for the German taxpayer are considerable. 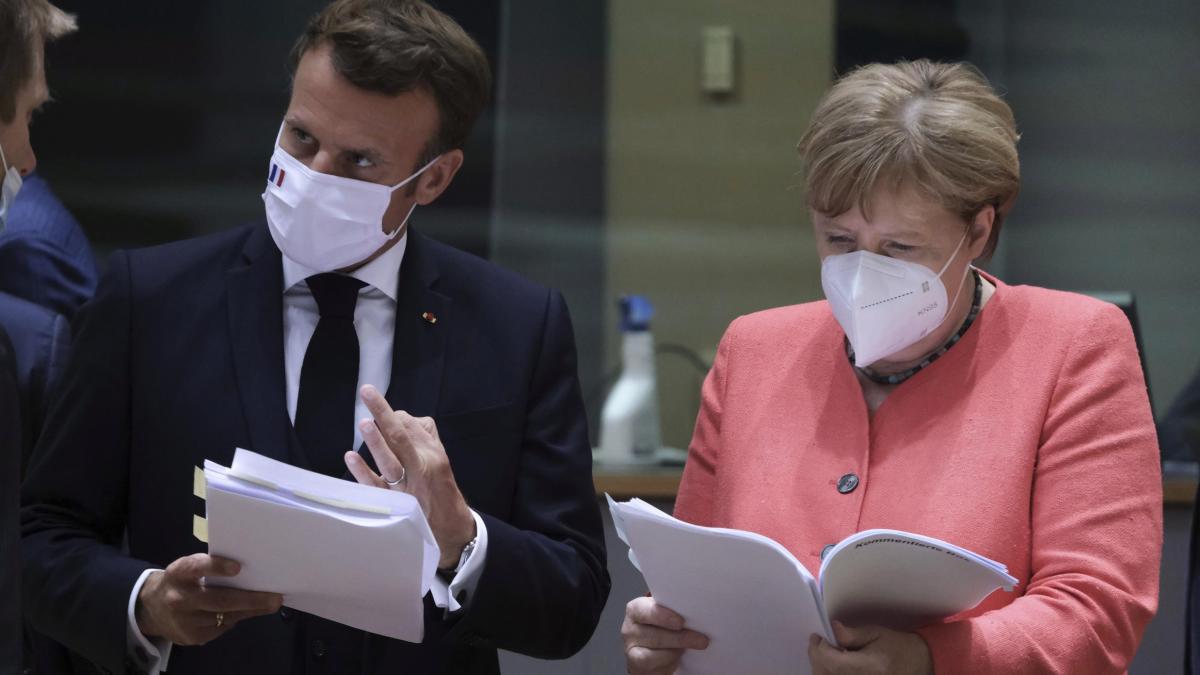 An explosive document landed in the digital mailboxes of the members of the Bundestag budget committee on Thursday afternoon: a special report from the Federal Court of Auditors (BRH) in which the auditors criticize the plans for the EUR 750 billion EU reconstruction plan and warn that the project poses considerable risks for German taxpayers mountains.

“Germany is expected to pay 65 billion euros more into the fund than it receives itself.

In addition, there are other liability risks in the three-digit billion range, ”said Kay Scheller, President of the Federal Audit Office, in an interview with journalists about the report.

"In fact, it is a question of mutualisation of debts and liability - a turning point for the EU."

Loans are becoming a permanent fixture

The law, which is being discussed in a similar form in the 26 other EU member states and has in some cases even been passed, is the basis for the reconstruction fund to start its work.

With the adoption, the national parliaments allow the EU Commission, among other things, to borrow the 750 billion euros for the fund on the markets and guarantee for these debts.

In this situation, the report of the auditors, who warn, among other things, of considerable risks for the German taxpayer and urge that the reconstruction fund not be made permanent.

"The Bundestag, Bundesrat and Federal Government should prevent joint borrowing from becoming a permanent facility."

The auditors do not criticize the recovery plan itself;

the decision for this was made politically and is not in question.

They complain, however, that politicians are taking considerable risks by approving the plan - at the expense of taxpayers.

Germany is liable for almost a quarter

They are particularly concerned that it has not yet been clearly regulated how the 750 billion euros that the EU Commission is borrowing for the reconstruction fund on the markets should be repaid.

Basically, 360 billion of this is to flow as loans that will be repaid by the governments concerned in the coming decades.

The other 390 billion, however, are to flow as grants that the member states do not have to repay.

This is the amount involved.

The auditors warn that the way in which the debts taken on by the EU Commission are to be paid off is not yet clearly regulated.

In principle, Merkel, Macron and the other EU heads of state and government agreed at the historic summit last July that the money would be repaid from the EU budget from 2027 - over 30 years.

Germany is therefore liable for the money with its share of the budget.

In the current budget period from 2021 to 2027, Germany's share of funding for the EU budget is around 24 percent.

New sources of money are not yet gushing

However, according to the auditors, it is still unclear how high Germany's share of the funding for the EU budget will be in the following decades.

The exact amount will depend on a number of factors, such as whether the German economy is growing faster or more slowly than that of other EU countries, whether new EU members are joining and whether there are planned new EU taxes that will directly affect the EU Budget should flow, will give.

The summit agreement last summer provides for a number of new taxes at EU level.

In addition to expanding trading in emission rights, this also includes a financial transaction tax or a tax on digital transactions, especially large internet companies.

However, all these sources of income are still under discussion and it is neither certain how much money they will generate nor that they will even exist.

Only a fee for non-recyclable plastic, the scope of which is manageable, has been due since this year.

Germany's share in the financing of the EU budget will also depend on the outcome of the negotiations on the upcoming long-term budget MFF and also on whether Germany and other net contributors will continue to receive premium discounts.

The negotiations in 2027 are likely to be as tough and toxic as they were last year.

"How much the member states are liable for is based on the share of the EU budget," says BRH President Scheller.

"If other states cannot or do not want to pay their bill in the end, the other member states are liable proportionally." The refusal of payment by another EU state is an extreme case, but the BRH calls for repayments to be laid down in a binding repayment plan in which the Member States' shares in the repayment should be determined.

This is also important because the ratification law basically gives the EU Commission the opportunity to raise far more money on the markets than is necessary for the reconstruction plan.

With the ratification of the own resources decision, the member states would give guarantees for at least 4,000 billion euros - or 0.6 percent of their gross national product.

It is more than five times the volume of the rebuilding plan.

This is the result of calculations by the economist Friedrich Heinemann from the Center for European Economic Research (ZEW).

From the auditor's point of view, this overcollateralization invites the establishment of the reconstruction fund over and over again - a thought for which there are not only many supporters at European level.

Federal Finance Minister Olaf Scholz (SPD), for example, had declared last week that the plans were the way to a European fiscal union, i.e. an EU that operates independently, levies taxes and can run into debts on its own.

"This leeway could arouse desires, fuel speculation about a stabilization of the debt and tempt to delay the start of repayments," warns BRH President Scheller.

For the euro rescue package ESM, for example, an overcollateralization of 40 percent would have been sufficient.

That is tricky because, contrary to what is sometimes claimed, with the construction of the fund, debts are pooled;

not unlimited, but on a large scale.

"With the ratification of the capital adequacy decision, the member states are giving an irrevocable guarantee that they will be responsible for the repayment of the EU bonds as a whole," says Scheller.

“Theoretically, if the Commission has to redeem EU bonds and individual member states fail to pay, it could approach the other member states and demand up to 0.6 percent of the gross national product of each member state.” In the case of Germany, that would amount to 20 billion Euros per year or 600 billion euros over 30 years.

However, the BRH examiners are also aware of the limits of their possibilities.

The design of the reconstruction plan and the content of the ratification law were decided at EU level;

Changes to the law or even a detailed repayment plan would shake the entire European unification and are practically impossible.

It is about the MPs being aware of the risks they are taking on behalf of the taxpayers, said Scheller.

He and his colleagues are counting on the fact that a binding repayment plan will be agreed upon at the next discussion about a re-launch of the fund, who do not consider themselves to be ruled out.

In addition, it is crucial that federal policy in the currently discussed reform of the Stability and Growth Pact insists that the rules enforce stricter budget discipline in the future.

The rules are the guarantee that the euro countries operate solidly.

The currently suspended fiscal rules are to be reformed and a heated discussion has already broken out about whether they should also be relaxed.

The dispute over the rule of law clause in the EU budget shows how fragile the agreements at European level can be.

At the marathon summit in July, the heads of state and government also agreed in principle that funds from the EU budget could be cut in future if member states violate the rule of law.

Poland and Hungary, the main addressees of this rule, sued the European Court of Justice against it on Thursday - even though the heads of government Viktor Orbán and Mateusz Morawiecki agreed in principle to the rule at the summit.