Shanxi Jinzhong National Agricultural High-tech Zone: Solving the problem of northern dry farming in the future, one person will cultivate 10,000 mu of land

China News Service, Taiyuan, March 7 (Reporter Li Xinsuo) Use organic dry farming to solve the problem of sustainable agricultural development in northern China, customize intelligent agricultural machinery and equipment for organic dry farming areas, and strive to achieve the goal of cultivating 10,000 mu of land by one person in the future. Since it was approved at the end of 2019, Shanxi Jinz 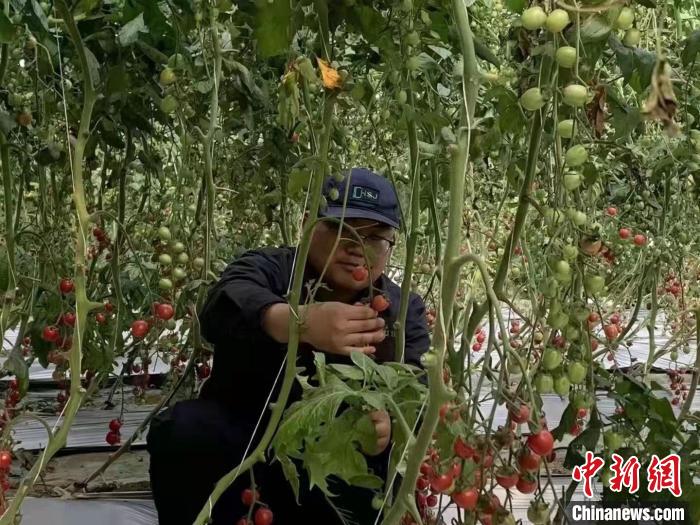 "The recipe is tailored according to the physical condition of each pig, and the pigs can be fed automatically and accurately and quantitatively. You can raise pigs at the click of a mouse in the office." Project leader Li Yutao introduced that this project invested and constructed by Taigu Oriental Hope Animal Husbandry Company will Realize the intelligent and digitalization of pig breeding.

In the Jinzhong National Agricultural High Zone, the above scene can be described as the epitome of industrial development.

"We are committed to the research and development of exclusive customized agricultural equipment for organic dry farming areas, and strive to achieve one person farming 10,000 mu of land in the future." Wang Shaopeng, the relevant person in charge of the Intelligent Agricultural Equipment Laboratory of the Chinese Academy of Sciences, said that the base develops, designs, and produces diesel with completely independent intellectual property rights. The engine meets the emission standards of China IV, China V, the United States and the European Union, and can also meet the continuous upgrade requirements of future national emission standards.

At the moment when new industries such as 5G, artificial intelligence, and big data are surging, the Intelligent Agricultural Machinery Equipment Laboratory of the Chinese Academy of Sciences integrates these industries into the entire process of agricultural production and contributes many agricultural "black technologies".

With the help of the tractor 3D simulation driving training system, the driver can get the same driving experience as the real machine; the Beidou intelligent equipment monitoring terminal, through the terminal system to connect the intelligent agricultural machinery "cloud platform", can realize the operation area and operation quality of each agricultural machine The whole process of intelligent remote monitoring; for pesticide spraying and forest and fruit plant protection in field operations, the unmanned plant protection machine operates 50 acres per hour, which can save 50% of the pesticide consumption and 90% of the water.

Rong Juan, deputy director of the Science and Technology Innovation Department of Jinzhong National Agricultural High-tech Zone Science and Innovation Base, introduced that the laboratory will be based on the third-generation agricultural machinery technology system, focusing on organic dry crops, closely focusing on organic, dry farming, and Shanxi topography, soil resistance and other characteristics , Research and develop multi-model intelligent agricultural robots and supporting intelligent agricultural machinery covering the entire process of characteristic crop production, using information technologies such as world-ground integrated networks, multi-dimensional sensors, and big data platforms to lay the foundation for the entire process of unmanned demonstration operations.

"In this loess plateau,'face to the loess and back to the sky, hoeing the crops at noon on the day of the day' was a common agricultural production scene." Rong Juan said that with the help of intelligent technology, the'mouse-type' agriculture is moving from demonstration to full promotion. .

At the end of 2019, the State Council approved the first batch of national agricultural high areas in Shanxi Jinzhong and Jiangsu Nanjing.

Among them, Nanjing will explore the development of urban modern agriculture in the central city, while Jinzhong will use "organic dry farming" as the theme.

One north and one south, echoing each other.

"Organic dry farming is an important direction for deciphering the sustainable development of agriculture in the north, and it is also a major revolution in the way of agricultural production and management in Shanxi." Li Chenghai, director of the Management Committee of Jinzhong National Agricultural High-tech Zone, said that at present, the people are concerned about a better life. The contradiction between yearning and the insufficient supply of high-end agricultural products is prominent. Jinzhong National Agricultural High-tech Zone takes the "special" and "excellent" development route based on Shanxi's characteristic agriculture.

As we all know, Shanxi is located in the Loess Plateau, dry land accounts for more than 70% of the province's land. The development of organic dry farming is the way out for Shanxi's agriculture.

In the eyes of local officials, the Shanxi National Agricultural High Zone is of great significance for improving the comprehensive agricultural benefits and competitiveness of Shanxi and even the central arid areas.

With more mountains and less land, diverse landforms, and diverse climates, this unique resource endowment determines the way out of Shanxi's agriculture lies in "special" and "excellent".

As the "kingdom of small miscellaneous grains", Shanxi has bred many special agricultural products. The output of millet, miscellaneous beans, and naked oats are among the best in the country, and red dates, millet, and aged vinegar are well-known at home and abroad.

In addition, Jinzhong National Agricultural High-tech Zone has concentrated on building a science and technology innovation platform, introducing 24 high-tech enterprises, and building 42 key laboratories and technology research centers above the provincial level, which can transform 208 new varieties and technologies, and become a pioneer in innovation incubation. ,forerunner.

Openness and cooperation force a leap

As an agricultural high area, it must radiate, drive and lead.

In the meantime, the Jinzhong National Agricultural High Zone actively applied for the Taigu Area (including the Agricultural High Zone) of China (Shanxi) Free Trade Zone covering an area of ​​20 square kilometers, and took international cooperation and exchanges as an important way to force itself to open up and improve.

The latter takes full advantage of the world’s largest plant protection company and the world’s third largest in the field of high-value seeds to carry out technical cooperation with internationally renowned seed companies such as Sinochem Agrochemicals, Bayer in Germany, and Rexwand Breeding technology and product services have cultivated more than 110 new varieties including Syngenta, Bayer in Germany, Rexwang in the Netherlands, and the United States, and selected 37 varieties suitable for promotion in Shanxi.

In 2020, Taigu peppers will be sold to Russia, Singapore and other countries on the "Belt and Road" express train.

Five companies in the region have obtained overseas product and management system certification.

According to the plan, the local area will introduce foreign investment in key parks such as Syngenta Modern Agriculture Demonstration Park and Tomato Town, and jointly build international cooperation parks with leading international agricultural enterprises, and sell the superior products of Jinzhong National Agricultural High Zone overseas; at the same time relying on Shanxi Nonggu e-commerce base has introduced a number of cross-border e-commerce companies such as Ningbo Cross-border Electronics Trade Association, and strives to achieve self-exporting by more than 5 households.

In addition, the local area will also organize well-known enterprises such as Guangyuyuan, Tiansen Group, and Yiyuan Winery to carry out international trademark certification and enhance international operation capabilities; actively promote the construction of bonded warehouses in the Jinzhong National Agricultural High Zone to expand exports and " Bonded imports from countries along the Belt and Road.

"We introduced market players and successfully held the 3rd China Rural Revitalization (Taigu) Forum, the 2nd Jinzhong Modern Agriculture Expo, Shanxi Medicinal Tea E-commerce Promotion Conference and other conventions and exhibitions." Li Chenghai said from April last year to At the end of the year, Jinzhong National Agricultural High-tech Zone received a total of more than 30,000 visitors from 21 provinces (cities). It is becoming an external window for Shanxi's agricultural and rural development.