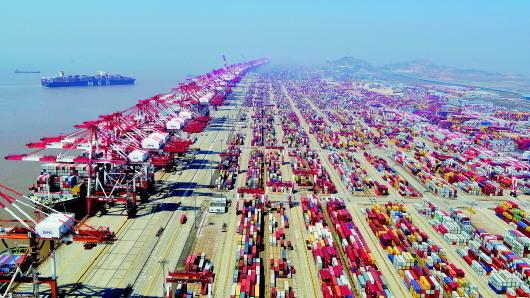 The rising shipping freight index and the influx of foreign trade orders were originally a good sign of the foreign trade situation. However, after in-depth interviews, the reporter found that the large fluctuations in freight rates and the serious imbalance between the supply and demand of transportation capacity are actually "the hidden worries behind the sweetness", which directly increased foreign trade companies. Cost, disrupted the export plan.

Stability, orderliness, and efficiency are the necessary conditions for the healthy development of the shipping market. However, in the absence of effective control of the foreign epidemic situation, some overseas ports are severely detained, and the return of empty containers is blocked, only by taking "extraordinary" measures can the problem be resolved. .

Shipping "bull market" is coming, but it is full of "thorns"

Entering 2021, the rate of increase in freight rates has narrowed, but it is still at a high level.

The reporter's interview found that the main reasons for the skyrocketing freight rates are twofold: First, due to the epidemic, some foreign orders have been transferred to China where the epidemic has been effectively controlled, coupled with the strong demand for daily consumer goods from the "home economy" abroad, and foreign trade shipments. The volume has soared, objectively increasing the transportation demand; secondly, foreign ports have suspended work and reduced production, and operating efficiency has dropped significantly. A large number of ships are waiting for berths at anchorages, which consumes valuable transportation resources and causes a large number of empty containers to be stranded abroad. ".

Failure to ship in time will also face the risk of default.

The foreign trade market is "hot for export", but the roads for shipment are full of "thorns."

Since the outbreak of the epidemic, the shortage of shipping resources, dominated by shipping capacity and containers, has been global, and the supply of resources has been in short supply relative to the continued vigorous market demand.

For example, for the Far East European route, the export market freight rates of East Asia, Southeast Asia and South Asia have also risen sharply, and some have even exceeded the increase in the domestic market.

The reporter learned from many shipping companies at home and abroad that the shipping "bull market" has not been encountered in ten years. In order to seize this opportunity, shipping companies have fully allocated capacity and adopted unconventional measures, such as renting multi-purpose vessels to transport container goods, to try to ease the situation. The problem of capacity shortage.

It can be said that all operational ships have been put into operation.

In January 2021, the overall input capacity of the global container market was 23.363 million TEUs, and the capacity scale has returned to the level before the global epidemic in January 2020.

As of February 26, 2021, the global container market has a capacity of nearly 24 million TEUs, an increase of 3% year-on-year, and an increase of approximately 700,000 TEUs compared to the pre-epidemic capacity.

COSCO SHIPPING has entered the first echelon of global liner companies and ranked third in global capacity, but it is not the only one.

Taking the European market as an example, COSCO SHIPPING's market share is only about 12%.

According to COSCO SHIPPING Group, the current container capacity put on the market is 3.07 million TEUs, an increase of 4% compared with the same period last year.

Since the end of May last year, the company has added 40 ships in total, and its capacity has increased by nearly 200,000 TEUs, an increase of 7%.

Zhang Shouguo believes that although the capacity has been fully deployed, there will be a process for the freight rate to fall. The specific timing depends on the epidemic prevention and control situation, the economic and trade situation, and various factors in the logistics and transportation system.

Shipping logistics always needs to do everything possible to stabilize foreign trade and maintain smooth flow.

With the help of technical means, the efficiency of shipments can also be improved.

Shipping capacity includes ships and containers. At present, major shipping companies have vigorously put in capacity. The market is not only "short of ships", but also "short of containers". A "box thinking disease" plagues the shipping industry.

As the overseas epidemic has not yet been controlled, employees in destination ports such as Europe, America, Australia and New Zealand have been continuously infected with new crown pneumonia, resulting in labor shortages, which has reduced the operational efficiency of ports, warehouses, storage yards, inland transportation and other links. The efficiency of logistics turnover such as cards and warehousing has dropped significantly.

In Southeast Asia, Europe and Australia, the waiting time for berthing at Port Klang in Malaysia, Felixstowe Port in the UK, Melbourne Port in Australia, and Auckland Port in New Zealand has reached more than one week.

Terminal congestion brings a series of chain reactions, reducing the utilization rate of ships and reducing the efficiency of container turnover.

At present, the number of single-vessel turnover in the market has dropped from 170 in 2019 to 121. The efficiency of container turnover in major markets in Europe and the United States has dropped by more than 20% compared with before the epidemic. The inventory of empty containers in some important foreign ports is three times the normal level.

Under this circumstance, the empty containers could not be transferred back in time, which caused a sudden shortage of domestic containers for a while, which promoted a rapid increase in freight rates in the short term, resulting in a tight situation of "one box is hard to find".

In addition to obstacles to circulation, the sudden surge in demand for containers made production companies unexpected.

In the first half of 2020, container demand is sluggish, container manufacturing companies have entered a trough, and some factories are facing suspension of production.

At the same time, rising container raw material prices and insufficient supply are another "bottleneck" problem.

Affected by multiple factors such as the supply and demand relationship in the container building market and the increase in raw material prices, the price of empty containers has risen from US$2,000/TEU in early 2020 to US$3,500/TEU in early 2021.

Insufficient supply of raw materials and manpower has made it impossible to guarantee the arrival time of containers, which has further exacerbated the increase in shipping rates.

At present, container production tightens the clockwork, and container companies such as Shanghai Huanyu increase production man-hours. At the same time, they have increased their efforts to recruit and train supporting personnel by adding equipment, improving processes, and increasing production capacity, and continuously tapping their potential. Production efficiency has increased by more than 60%.

The key to stabilizing foreign trade and ensuring smooth traffic lies in containers.

In order to alleviate the shortage of empty containers, coastal ports such as Shanghai and Ningbo, and shipping companies such as COSCO SHIPPING have launched the "extraordinary" initiative of "transporting empty containers for thousands of miles".

Although the cost of transshipping empty containers is even higher than that of producing new containers, under special circumstances, it can alleviate the urgent need of "lacking containers".

Shipping companies transport empty containers as an "extraordinary" means at any cost.

Supplement the supply of capacity, add vehicles to sail at high speeds, at the expense of fuel consumption, to make up for the time delayed by the congestion of the cargo terminal, in order to ensure the smooth flow of logistics.

The latest data released by Shanghai Port shows that in January this year, the container throughput exceeded 4 million TEUs again, and the number of empty containers returned increased by 18.9% month-on-month.

In the same month, Ningbo imported about 730,000 TEUs of empty foreign trade containers, a net increase of about 160,000 TEUs compared with the monthly average of the fourth quarter of 2020, an increase of 28%.

Yang Yanbin, deputy general manager of the production and business department of SIPG, said that Shanghai Port actively communicated with major domestic and foreign shipping companies, introduced measures such as preferential rates, and asked them to transfer as many empty containers back to Hong Kong from overseas as possible.

From the second half of 2020 to February 2021, COSCO SHIPPING has transferred a total of 2.7 million TEU of empty containers from overseas, and added 850,000 TEU containers to meet the demand for export containers, and the number of containers has increased by about 20%.

At the same time, efficiency is required from management, and innovative port management improves the efficiency of container circulation.

Various container operations in Shanghai Port have been processed online 24 hours a day. After the imported containers are unloaded, the imported goods with complete port procedures can be picked up from the terminal within one hour.

Qian Yong, general manager of Zhejiang Seaport International Transportation Co., Ltd., said: "Originally, there was only sea and air transportation. Now the price of sea transportation is very high and it is difficult to find one cabin. The China-Europe Express is a new choice. It adds a logistics channel to help export companies. Development opportunities during the epidemic period after living."

Leveraging its comprehensive transportation advantages, COSCO SHIPPING has opened up supply chain breakpoints, connected upstream and downstream industries through "land to water", "land to rail", "iron to water", and "air to water", etc., and went all out to ensure the smooth flow of the global supply chain.

Market changes are changing rapidly. This round of shipping market volatility has shown foreign trade companies the importance of safeguarding their rights and interests through contract terms.