Building with bees: Unfortunately with the wrong ones

Real estate companies have discovered the bees. They let them hibernate with their objects and whiz over green spaces in summer, as effectively as possible for advertising. After all, sustainability is good for business. However, these actions are of no use to the genuinely endangered species. 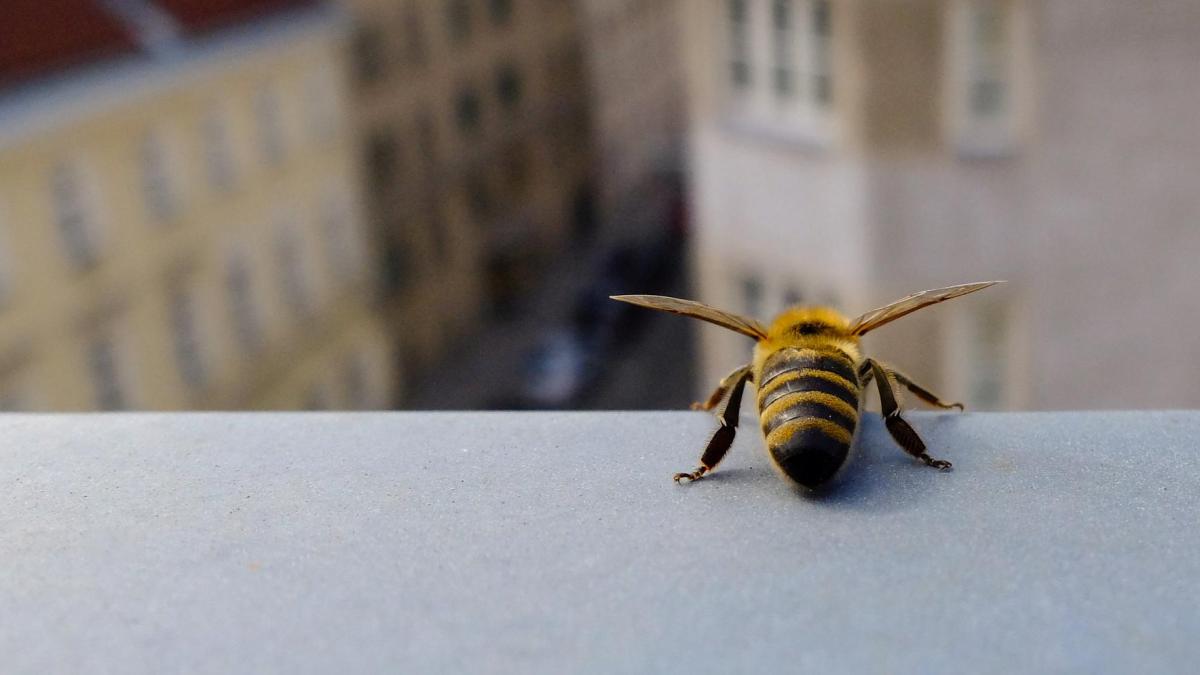 Social distancing is now out of the way with Apis mellifera, commonly known as the honeybee.

Where there is a constant buzzing and buzzing in summer, around 10,000 insects now sit close to each other in their winter clusters in the sticks and warm each other by trembling vigorously with their flight muscles.

In this way they drive the temperature up to the necessary 35 degrees Celsius to protect their brood.

This will now swarm out again in the spring in the fashionable Grünwald near Munich, where the Bavarian project developer BHB, less than 200 meters from the Isar, is not only based.

The company has created a refuge for honey collectors there.

Around 60,000 specimens buzz from the builder's garden in summer to collect nectar and pollinate plants in the process.

The BHB is one of the growing number of real estate companies who have committed themselves to protecting four-winged birds - and who advertise with it.

The spectrum ranges from small housing cooperatives to real estate groups such as Vonovia, the largest landlord in Europe with 400,000 apartments, to real estate fund companies such as Union Investment Real Estate.

By letting the insects fly on their property, they made “a valuable contribution to preserving the bees and promoting biodiversity in the region,” says beekeeper Andreas Riedl, who lets his insect colonies fly in the BHB's garden.

The fact that companies also make a contribution to their sustainability statistics and image should also play a role.

Lenders and investors are increasingly careful to ensure that companies adhere to certain ESG criteria.

Anyone who can collect points here is in a better position in the market and with tenants.

Conservationists therefore see the sudden love of animals with a little skepticism.

But it has long been found that this is only partially true.

Statistics from the United Nations Food and Agriculture Organization show that the number of commercial beehives worldwide has grown by more than 45 percent since 1961.

What is shrinking, however, is the number of wild bees.

In Germany, reports about the bee deaths have rekindled interest in beekeeping, says Petra Friedrich, spokeswoman for the German Beekeeping Association.

"The number of beekeepers and bee colonies in the country has increased again since then." In 2007, around 700,000 bee colonies were buzzing around between Aachen and Görlitz, today it is a good million.

"Honey bees will not die out as long as there are caring beekeepers," says Werner von der Ohe, head of the Institute for Apiculture Celle of the Lower Saxony State Office for Consumer Protection and Food Safety.

In contrast, "over 60 percent of the around 560 wild bee species in Germany are threatened".

Above all, by “sealing landscape areas, expanding residential and commercial areas, widening streets and designing monotonous gardens,” says the director of the institute.

"If there is a lack of specific nutrient plants, the wild bees cannot feed themselves."

Many of the new beekeepers are active in cities.

The trend towards urban gardening, the cultivation of vegetables and plants on balconies or backyards in the city, plays a role, says Petra Friedrich.

In the meantime, this complains that some large cities have an abundant density of bees.

"In Berlin, for example, the risk of transmission of bee diseases such as the 'American foulbrood' among bee colonies has risen sharply," says the spokeswoman for the Beekeeping Association.

The brood disease, also known as bee plague, is triggered by the bacterium Paenibacillus larvae and kills the larvae.

The peoples lose all of their offspring.

In the worst case, an infected people must be killed to prevent transmission to other sticks.

If real estate companies were to bring additional bee colonies into cities on a large scale, it could actually encourage the spread of disease.

On the other hand, it can also be seen as positive when companies even try to be environmentally friendly.

"Companies can use it to sensitize their employees and tenants to insect protection," says Silvia Teich, spokeswoman for the German Nature Conservation Union (NABU).

This also plays a role for the property developer BHB, who is cooperating with the Munich-based company Nearbees on its project.

Hobby beekeepers can use its online platform to market their honey - and interested consumers can learn more about the insects.

But selling is not everything.

Nearbees experts regularly offer lectures directly at the beehive in the company's garden.

“Our employees can broaden their horizons and make their own contribution to biodiversity,” says BHB managing director Melanie Hammer.

"We didn't just want to resolve a controversial topic at management level just because it is currently in vogue, we want to collect our entire workforce and pull together."

The Nassauische Heimstätte group of companies, with around 59,000 units, the largest housing company in Hesse, has had six bee colonies from the Walkmühle beekeeping in Nieder-Eschbach collect nectar on open spaces between their rental houses for several years.

"We see it as our duty to consider nature and species protection when constructing and operating buildings and green spaces," says Gregor Steiger, sustainability expert in the corporate development competence center at Nassauische Heimstätte.

"We are making an active contribution to this with the bee project."

In several quarters, including on Alice-Behrend-Strasse in Berlin, he allows beekeepers to let their bee colonies fly.

At the same time, the group entered into a two-year cooperation with Nabu last December to transform green spaces in its urban residential areas in North Rhine-Westphalia into retreats for wild bees, butterflies and birds.

Trees, bushes and flower strips are planted on monotonous lawns.

Nest boxes for birds and insect hotels are hung.

The latter are made of natural materials such as brick or hardwood, into which holes are drilled to give shelter to wild bees and other insects.

“As a large housing company, we have a special responsibility for the quality of life in cities,” says Vonovia CEO Rolf Buch.

The cooperation helps to win people over to the interests of animal and nature conservation, says Nabu Federal Managing Director Leif Miller.

"We reach many hundreds of tenants per project, which gives us a large reach."

Union Investment Real Estate, the real estate fund manager of the Volks- und Raiffeisenbanken, started the "Imke" project in cooperation with the Stadtbienen association and this summer settled 66 bee colonies with more than a million nectar collectors on the roofs of 32 of their properties.

The aim is "to make a contribution to the protection of biodiversity in order to promote the ecologically sustainable keeping of bees", says Fabian Hellbusch, Head of Marketing and Communication at the fund company.

"This includes that our bees are now hibernating on their honey, building their own honeycombs, adding no foreign wax and using no breeding queens."

In this way, society contributes to species conservation, says Hellbusch.

"Unlike in the country, where food options for all pollinators are still scarce, there is currently an abundant and diverse food supply for bees and many other insects all year round in German cities."

This is exactly where animal rights activists see a need for action, especially in view of the densification in many cities and the progressive sealing in urban areas.

"It would be better, however, if the companies created wildflower meadows and planted perennials and trees in order to increase the food supply for wild bees."

Because only these species that only live in the wild, such as bumblebees and wasps, are threatened with extinction.

Honey bees, on the other hand, are farm animals that beekeepers tend to produce honey.

"If a company lets honey bees fly on its land, it could also let pigs and cattle graze there," says Teich.

Even the spokeswoman for the Beekeeping Association makes the fine difference between the colonization of honey bees and the natural reservoir.

It is "nice when beekeepers are offered areas for their bees," she says.

"It would be even more important if companies created food opportunities for all flower-visiting insects."

The increasing sealing of the soil makes it more and more difficult for the important pollinators to find food.

"After the rapeseed and fruit bloom, there is a lack of pollen and nectar-rich food for both honey and wild bees," says Friedrich.

“The existence of the latter is threatened.” For the conservation of these species, it is therefore particularly important to plant trees, shrubs and perennials that also bloom in summer and autumn.

One example of this is the housing association WGH in Hennigsdorf, Brandenburg.

Several years ago, the Kleefeld-Buchholz housing association in Hanover created a beehive between its multi-storey houses in the Misburg district, where a beekeeper lets his animals collect nectar.