LH apologized to the public... Some employees say, "Is there a law not to invest?"

While Korea Land and Housing Corporation and LH have even apologized to the public today due to allegations of employee speculation in the new city, some employees are questioning by posting a statement stating that there is no law against making real estate investments because some of them are LH employees. 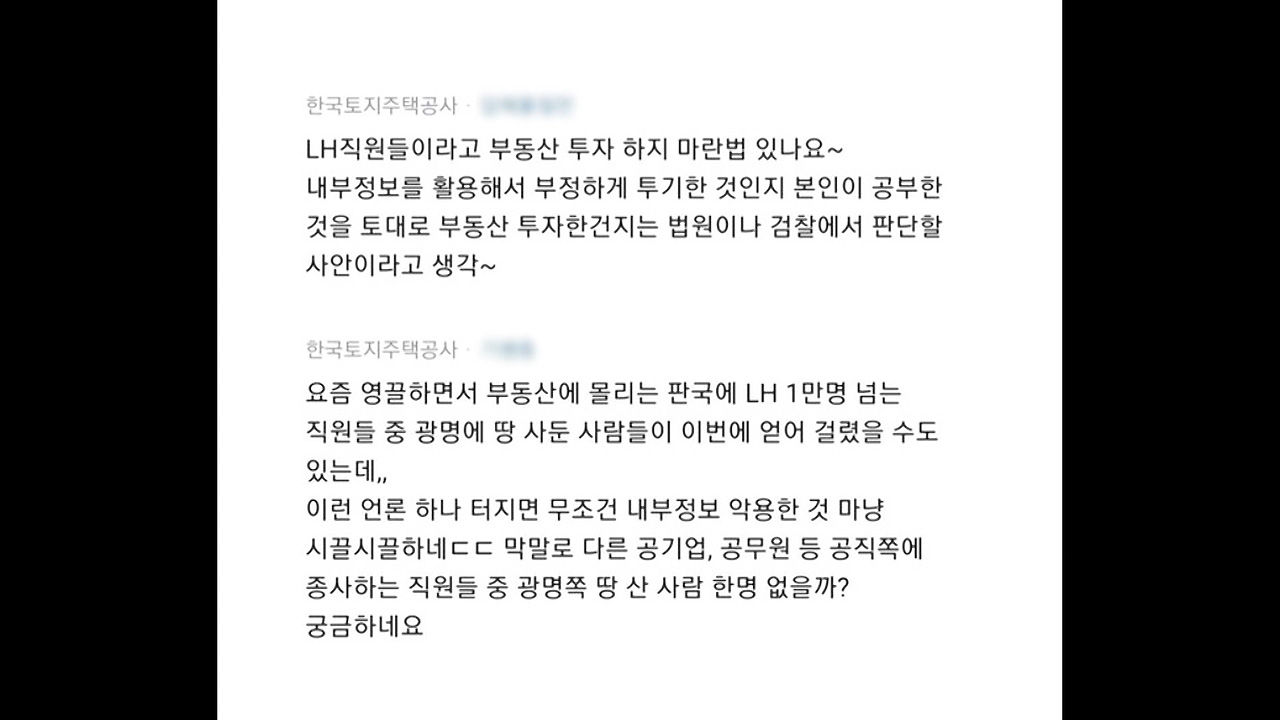 Korea Land and Housing Corporation, LH, has even apologized to the public today (4th) due to allegations of employee speculation in the new city, and some employees are questioning by posting a statement stating that there is no law against making real estate investments because they are LH employees.

According to an article posted on LH's online community'Blinds', one LH employee said, "Is there a law to stop investing in real estate because they are LH employees?" "It's a matter to be judged by the court or the prosecution as to whether the real estate investment was made."

In blinds, you must be authenticated with your company's email account before you can write.

Another LH employee argued that Gwangmyeong and Siheung were a special management area that was designated as a public housing district and then canceled, and that it was a place to be developed no matter who developed it.

Another employee wrote, "Out of 10,000 LH employees, the people who bought the land in Gwangmyeong may have gotten it this time," and said, "If one burst, it is noisy as if it was abusing internal information unconditionally."

At the same time, he asked, "Would there be one person who lives in Gwangmyeong's land among other public corporations and public servants who are engaged in public office?

LH employees' land speculation suspicion yesterday was the participation in solidarity and a lawyers' meeting for democratic society (Minbyun), which received a large loan of 5.8 billion won from 10 former and current LH employees and their families, to buy 10 billion won worth of land in the district before the new city was announced. It popped up while revealing that it was.

Yesterday, the president even ordered a thorough investigation into allegations of speculation, and in the end, LH even issued an apology to the public.