Federal Environment Minister Svenja Schulze (SPD) does not want to leave the climate issue to the Greens. It wants to significantly accelerate the expansion of renewable energies. When it comes to hydrogen, however, she is cautious in the interview. 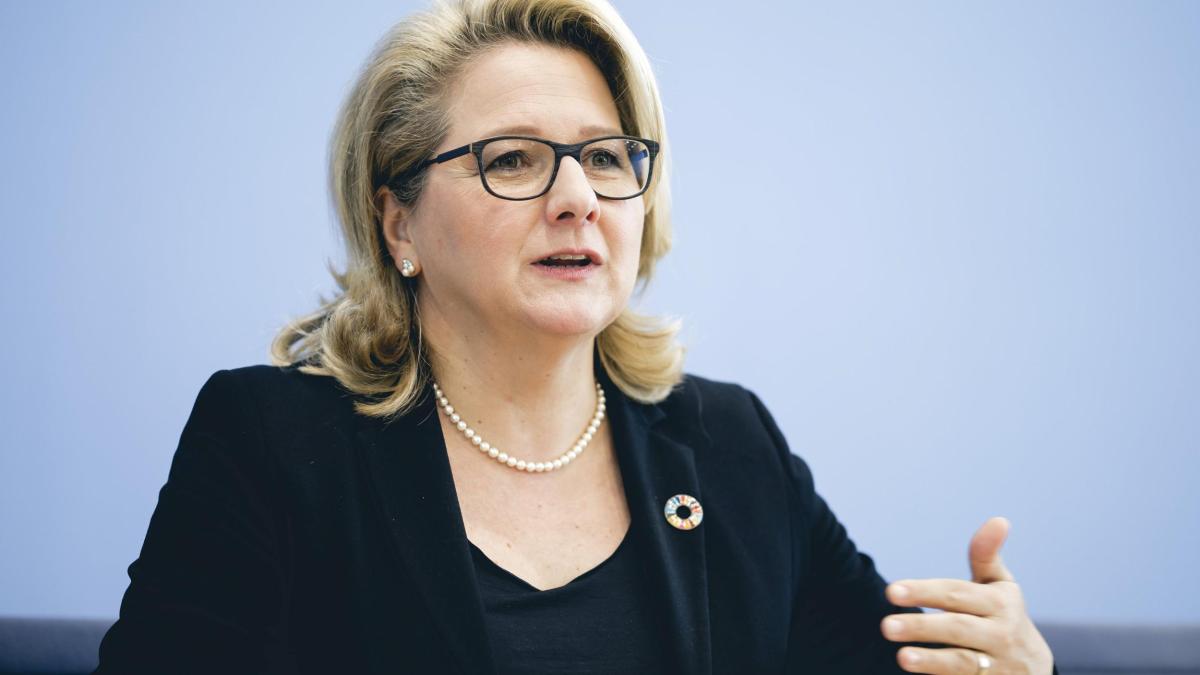 For Svenja Schulze, nuclear power, even in small, ultra-modern plants, is not a future model for saving the climate.

"Nuclear reactors, which supposedly eat nuclear waste and are supposed to be harmless, are fairy tales," says the Federal Environment Minister.

Such promises have never been technically realized in the past.

How green do the reds get?

I would turn it around: the climate issue is a red question.

Because climate protection is only successful if we shape it socially and create sustainable jobs.

And that is our brand essence, because the SPD has the right answers.

Do you really believe that you can score points over the original in terms of climate protection, the Greens?

Climate policy that makes a difference means a fundamental change.

To realize this, leadership, concepts and coordination of many fields are necessary.

And yes, I think a Social Democratic Chancellor can do that, Olaf Scholz can do that best.

That is now all part of the standard repertoire of climate policy in almost all parties.

How to make electricity prices affordable, for example.

Germany is just too slow at the moment; all of that must be the central task of the government.

You are part of this government.

And there it is CDU Economics Minister Peter Altmaier who suggested an end to the renewable energy levy, which brings in 30 billion euros annually.

How fast can it go?

That is an idea from Olaf Scholz, and I am pleased that Peter Altmaier has taken it up.

We capped the EEG surcharge this year and want to gradually reduce it so that it will expire completely in 2025.

It is well known that we are getting out of coal and nuclear power, which is why we need far more renewable energies than today and we have to advance this accordingly.

In the future, this should be an item in the federal budget - which, however, and this is the second step, must be financed properly.

What if we still don't make progress with the expansion of renewable energies as planned?

Are we heading for a green electricity gap?

To prevent that from happening, we have to press ahead with the expansion of renewables as part of the EEG amendment; by 2030 we will need 100 terawatt hours more than has previously been anchored in law.

And it annoys me very much that in Baden-Wuerttemberg or Bavaria little is done for it, but all the more is done against it, and in NRW even a law is being created that counteracts this.

How does the SPD's adherence to the Nord Stream 2 gas pipeline fit in with the end of the use of fossil fuels?

We cannot get out of coal, nuclear power and gas all at once.

For this decade and the next, we still need natural gas;

it's not just about Germany.

In view of the falling production volumes in our western European neighbors, gas is likely to be needed there for a transition period.

We also run the risk of ending up in international arbitration tribunals with claims for compensation if we stop the project.

In this respect, it is a good thing that Manuela Schwesig is doing so much for the completion of Nord Stream 2.

When it comes to the future topic of hydrogen, you emphasize what this energy carrier should not be used for.

Not for heating, not for cars.

We are doing the opposite.

We have ensured that the national hydrogen strategy is not an essay for reflection, but an active, trend-setting and very concrete industrial policy.

This strategy makes it possible to build a hydrogen industry on a large scale, and it was Social Democrats, mainly Olaf Scholz and I, who pushed it forward.

With the quota for hydrogen-based, climate-neutral aviation fuel, we have ensured that a stable demand for hydrogen and thus a market is created in the first place.

I have launched the only major decarbonization program for industry so far that is also very much about hydrogen.

I would be very happy if the Federal Minister of Economics describes less paper and takes more care of implementation.

Why are you ruling out fuel cell drives in the passenger car sector with the hydrogen option?

I'm not doing that.

Nobody is prevented from using these technologies and it also counts towards the greenhouse gas quota.

But I also say: In the passenger car sector, both hydrogen and electricity-based fuels based on hydrogen are clearly inferior to battery-electric drives.

In order to have the same mileage, one would need five to seven times more wind turbines to produce synthetic fuel than if I were driving directly with an electric motor.

Nonetheless, we ensure that synthetic fuels come onto the market in the first place, namely where there are no more efficient alternatives: in aviation.

It is only through our quota for hydrogen-based kerosene that there will be reliable demand for synthetic fuels for the first time.

My suggestions for more climate protection in the tank are the first effective impetus to build up electrolysis capacities on a large scale.

That will be good for the hydrogen economy and many other industries.

Unless we import green hydrogen or synthetic fuel from countries with more space for renewable energies.

I also assume that we will have to import hydrogen.

But in the end it also has to be green hydrogen.

And for that, production has to be ramped up first.

And that's what we're investing in in Germany: so that large-scale, industrial green hydrogen production can get going in the first place.

When there are pipelines or ships and the corresponding terminals to bring the hydrogen to Germany, then we will certainly do it, as we have always imported oil and gas in the past.

Even people like Bill Gates are now saying that nuclear power in the form of smaller reactors can be a solution for climate-neutral electricity generation.

Did we close all doors to such options too quickly after the Fukushima disaster?

Three generations have benefited from nuclear power, 30,000 generations now have to take care of the shiny legacies.

It's a very expensive solution.

And the promises that the next generation of power plants will be really safe and clean have a certain tradition, but this has never been technically realized.

Nuclear reactors, which supposedly eat nuclear waste and are supposed to be harmless, are fairy tales.

Ten years after Fukushima, your house has still not implemented the nuclear phase-out in accordance with the constitution.

When will you do it?

In 2020, the Federal Constitutional Court declared the Atomic Phase-Out Act to be practically invalid because you have still not organized fair compensation for the nuclear power plant operators.

We will - not as the Ministry of the Environment, by the way, but as the federal government as a whole - implement exactly as the court has determined.

We are there and work as quickly as possible, but we also want to be as safe as possible in the result.

Because a compensation regulation is legally complex.

As for the new building fantasies that you just mentioned: This whole discussion only distracts from the more important question: Where can renewable energies be expanded?

We actually have to see solar systems on all roofs.

Wherever wind turbines can be built, this has to be done.

People avoid this discussion, but it is central.

The discussion is also so difficult because the energy transition has brought Germany the highest electricity prices in the world, which is becoming more and more of a location disadvantage.

When it comes to climate protection, industry is much more advanced than some in the Union.

I keep taking this impression with me from numerous conversations in business.

It is completely clear to them that they have to produce CO2-free.

On the way to climate neutrality in 2050, companies need investment security.

And then I am amazed that many in the Union only delay and drag on decisions: it doesn't help!

If we don't do what is necessary or do it later, it will only get more expensive.

Just ask the big companies what costs the drought has caused in recent summers because, for example, transport routes over water were not available.

And with a view to the electricity prices, one should differentiate a little.

Yes, electricity prices for private customers have to go down, that's why I want to abolish the EEG surcharge.

But for industry, the electricity price on the exchange is decisive - and here we are in the middle of a European comparison.

Incidentally, that is one more reason to expand renewable energies more strongly.

Because they lower the electricity price on the exchange.