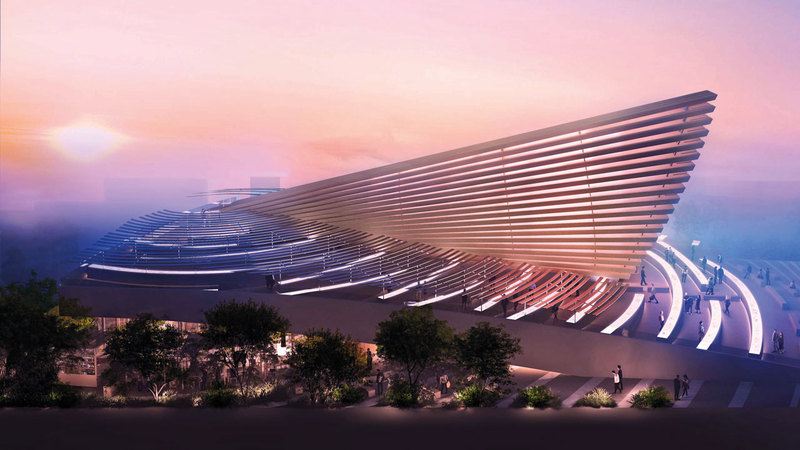 She confirmed to Emirates Today that about 60% of the building works have been completed, while it is expected to be completed in May 2021.

In detail, the British Commissioner-General at Expo 2020 Dubai, Laura Faulkner, said that about 60% of the work of building the UK pavilion at the international exhibition had been completed, with the completion rate in infrastructure reaching 96%, and the overhead to 37%, compared to 48 % For facade and electrical and mechanical engineering works, and 15% for finishes.

She added that the installation of the glass that will form the outer walls of the ground floor area, "Wedge", has begun to surround the main residence area in the wing, to be resistant to weathering.

Faulkner explained that the UK pavilion is inspired by one of the physicist Stephen Hawking's recent projects, which is called the "Breakthrough Message", which called on people from around the world to think about the message that we will convey to express ourselves as one planet, if we encounter other advanced civilizations in one day. The space.

She emphasized that the pavilion will allow people from all over the world to contribute to a collective message, and will also display British experiences in artificial intelligence and space, pointing out that the theme of the pavilion is "innovation for a common future", which will show how the United Kingdom cooperates with other countries to develop solutions to global problems. Complex.

She stated that the global challenge that we faced with the "Covid-19" pandemic gives our theme and the theme of the exhibition in general more importance, as international exhibitions bring people together in a spirit of hope and cooperation for a better future.

She pointed out that the design and technology of the façade of the pavilion will display the set of words that visitors contribute within the choir space, and it will also appear to everyone outside the pavilion, to transmit the collective message that we have created.

The wing is completed

Faulkner said: “Current estimates indicate that the UK pavilion will be completed in May 2021, when we expect to obtain a certificate of completion of construction, and we are also studying the benefits of carrying out some final fit-out work for the wing and the contents, with the approaching opening in August or September 2021, to ensure it remains ready. To receive visitors (Expo 2020 Dubai) ».

She revealed that the pavilion will have a restaurant called '1851', which is inspired by the history of the first world fair held in London, as it will display the best of UK food and beverages, as well as commercial, cultural, tourism and educational programs with networks of prominent and innovative speakers.

"With the expectation of millions of visitors, we will provide an opportunity to explore the story of the impact of the UK's role in artificial intelligence and the space industry on humanity," she added.

She added, "We cannot yet estimate the effect of the total cost in light of (Covid-19) in the project, but we are still within the allocated budget."