One person manages 6000 acres of land, with an annual net profit of 3 million yuan! This new rural profession can make a lot of money!   In the past, agricultural production gave people the impression that they were "faced with loess and back towards the sky", which was very hard work, and it had nothing to do with "high salary". Nowadays, agricultural managers have become a new profession recog 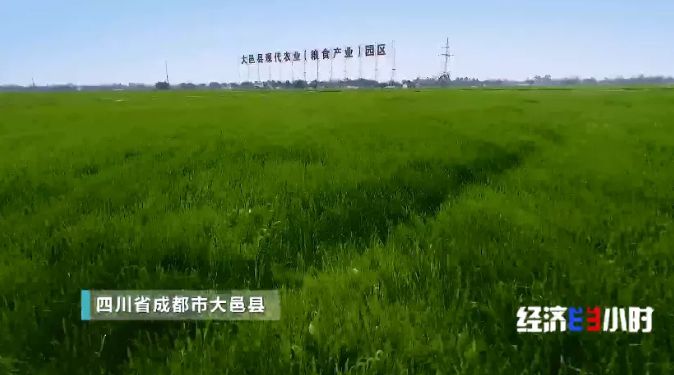 One person manages 6000 acres of land, with an annual net profit of 3 million yuan!

This new rural profession can make a lot of money!

In the past, agricultural production gave people the impression that they were "faced with loess and back towards the sky", which was very hard work, and it had nothing to do with "high salary".

Nowadays, agricultural managers have become a new profession recognized by the state and are receiving more and more attention.

The vast world is promising.

The Western Sichuan Plain has been called "Tianfu Granary" since ancient times.

Dayi County in the Western Sichuan Plain has the reputation of "the granary under the snow mountain".

However, like most villages in China, for a long time in the past, more and more people went out to work, and fewer and fewer people were farming.

But in 2020, 24-year-old Wan Xiaoyu and 25-year-old husband Wang Yi resigned together and went to the countryside to become professional agricultural managers.

Wan Xiaoyu used to work as a nurse in a hospital in Dayi County. Her husband, Wang Yi, was an employee of an auto repair shop. They had no farming experience.

Although the young couple didn't know much about agriculture, Wan Xiaoyu's father, Wan Fuxu, had dealt with farmland all his life and was a well-known local agricultural manager.

Like most villagers, Wan Fuxu was once an ordinary farmer with his loess and back to the sky. While burying his head and plowing his own acres, he was sad to find that many good farmland around him had been abandoned.

There is no gold in the fields, so naturally the hearts that desire to get rich cannot be kept.

Just in 2012, Chengdu started the training of professional agricultural managers

. Wan Fuxu immediately signed up after learning the news. After receiving a series of trainings in planting technology, pest control, and large-scale field management, he became the local number one. Batch of agricultural professional managers.

Now, eight years later, Wan Fuxu is already a professional manager, but he still spends a lot of time participating in various trainings every year.

After becoming a professional manager, Wan Fuxu set up an agricultural production cooperative to circulate the idle farmland of the villagers and continuously expand the scale of planting. He said that

he could only manage 100 acres of land before, but now he manages 6,000 acres. The annual net profit of the land reaches 3 million yuan

. This is something he, a traditional farmer, could not even think of before.

In January, during the agricultural slack season in Chengdu, Wan Fuxu and a few colleagues finally got down. They sat together and talked about last year's harvest and this year's plan. Wan Xiaoyu and Wang Yi also participated enthusiastically.

As a newcomer, if you want to become a qualified agricultural professional manager, you have to learn a lot.

After going to the countryside for a year, Wan Xiaoyu and Wang Yi have now obtained the qualifications of intermediate agricultural professional managers.

They manage two hundred acres of land in their father's cooperative.

The owner knows that firewood is expensive, and after managing the farmland by himself, the young couple discovered that doing a good job in agriculture is really not easy.

Although the current level of agricultural mechanization is already very high, farming does not require a hoe and a hoe, but the meticulous farmland management still makes the two newcomers a bit difficult.

They can't tell whether the farmland is short of fertilizers or has encountered pests and diseases.

But they soon discovered that a mobile phone can also be a "good hoe" for farming.

Li Zongbin, who came to Chengdu from Shandong to work as a professional agricultural manager 8 years ago, runs an

agricultural big data platform. The data is directly transmitted to the mobile app. You can see a variety of farmland data. Green plots indicate healthy plants. Orange The plots indicate that the growth of crops has been affected and manual treatment is required.

In recent years, with the strong support of Chengdu, professional agricultural managers have sprung up on the plains of western Sichuan.

Up to now, the local area has trained more than 19,000 professional agricultural managers. Among them are young agricultural workers, returning rural migrant workers, university graduates, transferred military personnel, and experts in farming.

Shandong rises up as a partner for rural revitalization, and Qiongshan Village turns into an Internet celebrity village

Talents are the priority for rural revitalization.

When it comes to "partners", we usually think of senior people in law firms and accounting firms in cities, but now this profession is gradually becoming popular in rural Shandong.

Dongzhongdu Village, Sishui County, Jining, Shandong, is located at the foot of Mount Ni, the hometown of Confucius and Mencius. Every weekend, this small village welcomes batches of tourists.

These primary and middle school students from surrounding cities learn special courses such as carpentry, pottery, and nature education.

With beautiful natural scenery and colorful research and study tours, Dongzhongdu Village has long been famous.

But just before 2018, it was still a key village for local poverty alleviation work.

In 2015, Wang Daqiang, who had worked in Beijing for more than ten years on engineering projects, came to Dongzhongdu Village for the first time. He was attracted by the beautiful ecological environment here. Jining is the hometown of Confucius and Mencius. He planned to build a research base in the village. Attract students from surrounding areas.

The idea is beautiful, but the reality is very skinny.

A single research project is very limited to tourists.

There are no restaurants or lodgings in the village, and even a decent chef cannot be found.

Just when they were unable to do anything, in 2018, Shandong Province issued the "Measures to Promote Rural Talent Revitalization", recruiting "village revitalization partners" from Shandong entrepreneurs and entrepreneurs at home and abroad, and jointly developing new agricultural entities And new rural business formats.

The partner’s mission is to return to the countryside and develop modern ecological agriculture, boutique tourism and other new forms of business. The government provides support in investment and entrepreneurship, land transfer, and supporting construction. This gave Wang Daqiang an opportunity.

They found the local government, hoping to build their company into a platform for gathering talents, recruiting more partners to come to the village to develop together, and to make the "cake" together. The two sides hit it off.

Qiao Yuanqing, who has opened a hotel in Sishui County for many years, came to Dongzhongdu Village as a partner at the invitation of Wang Daqiang.

Wang Daqiang's company is responsible for building and decorating the hotel, and Qiao Yuanqing only needs to be responsible for the operation to get 80% of the dividend.

During the "May 1st" holiday in 2020, Dongzhongdu Village Research and Study Tour Cultural and Creative Base officially opened its doors to welcome guests.

Although the current limit was imposed due to the epidemic, the base attracted more than 30,000 tourists and earned more than 1 million yuan during the five-day holiday.

And more local villagers have found more than 90 jobs at their doorsteps, including restaurants, hotels, and guides.

Although winter is the off-season for tourism, Wang Daqiang has signed contracts for winter vacation research and study tours with many surrounding schools, involving more than 20,000 students.

Once conditions permit, the village will soon usher in a new wave of students.

Half an hour observation: a capable person leads the revitalization of the countryside and presses the accelerator

Agriculture wants to develop and farmers want to get rich. To achieve this goal, large-scale and industrialized operation of agriculture has become the only way.

However, for a long time, rural areas have generally existed: the problems of aging farmers, part-time agriculture, and hollowing out of rural areas.

"Who will farm" and "who will manage" restrict the development of agricultural and rural areas. It is precisely because of this that it is necessary to introduce new backbone forces for rural revitalization, such as rural professional managers and rural partners, and regard building beautiful rural areas as fertile ground for entrepreneurship. If you pay, there will be rewards.