The online education industry accelerates the reshuffle after Xuebajun’s bankruptcy and its superior school class is taken over   Our reporter Li Chunlian   On January 26, the official WeChat account of Xuebajun's Youxue Class was transferred, and the account subject was changed from Suzhou Qianwenwandaba Education Technology Co., Ltd. to Shenzhen Parallel Online Education Technology Co., Ltd.

This means that the Shenzhen Parallel Line will take over the excellent school class under Pan Xuebajun.

Since Xuebajun went bankrupt at the end of last year, parents and teachers have been defending their rights for nearly a month.

On January 2, Zhang Kailei, the founder and CEO of Xuebajun, issued a long letter in the circle of friends, acknowledging that the company is in trouble and will gradually solve the aftermath problem.

A former staff member of Xuebajun contacted by a reporter from Securities Daily said: "We were also shocked when the incident happened suddenly."

In fact, since the outbreak of the epidemic, the online education industry has developed rapidly, and many new companies have emerged under the enthusiasm of capital.

However, after a year of marketing wars, the online education industry has gradually differentiated. The advantages of leading companies have become more obvious, and small and medium-sized institutions have become increasingly difficult under homogeneous competition.

"Under the catalysis of the epidemic, there was a big bubble in the development of online education before, and it is estimated that some companies will go bankrupt in the future." Pan Helin, executive dean of the Institute of Digital Economy, Zhongnan University of Economics and Law, was interviewed by a reporter from the Securities Daily Said that in the fierce competition, leading companies can stand out and obtain more capital and flow.

Zhai Lei, head of Banyu's marketing department, also told the "Securities Daily" reporter that companies that can survive must be because their business models are healthy enough.

Companies must have low-cost customer acquisition capabilities and high retention and transformation capabilities based on learning effects, and they must also take into account the health and scale of development. The scale cannot be stopped, and health cannot be lost.

Zhang Kailei issued an open letter stating that Xuebajun, who has been running for 8 years, fell down in the winter of 2020, and Xuebajun's 1-on-1 and Youxue small classes will be closed.

The open letter shows that the matter involved Xuebajun's 3,000 employees, more than 10,000 teachers, more than 50,000 students and more than 100 offline agents.

In the letter, Zhang Kailei denied the transfer of assets and promised that he would "never run away, never shirk responsibilities, nor declare bankruptcy unless the problem is resolved."

However, after December 26, 2020, Xuebajun has suspended classes in various institutions.

Recently, parents in Xi'an and many other places discovered that none of the corresponding business personnel and staff members could be contacted.

In addition, Xuebajun also defaulted on the wages of many teachers, which caused many teachers to join the camp of defending rights.

Although the financing of online education companies has been fierce since 2020, many companies still die from financial difficulties.

According to Tianyan Check, Xuebajun has gone through 6 rounds of financing from August 2013 to January 2017.

The last round was the $100 million Series C financing raised on January 20, 2017, and has not received financing since then.

Zhang Kailei attributed the failure of Xuebajun to financing failure.

"In the past three years, we have not raised a large sum of money. At least 5 times we have been on the verge of breaking the capital chain. In the most dangerous one, we even paid our teachers 4 days late..."

Problems continue to accumulate, and there will always be an outbreak.

In fact, the "Securities Daily" had previously reported on the issue of Xuebajun.

The previous article mentioned: As of July 17 last year, there were as many as 1,471 complaints involving Xuebajun App on the Black Cat complaint platform alone. In July last year alone, there were more than three or four complaints almost every day. , The main content of the complaint is "difficult to refund".

Today, Xuebajun has closed down for more than a month, and the staff and students are still defending their rights.

The Shenzhen Parallel Line is not well-known in the industry.

It is understood that Shenzhen Parallel Line was established in 2009, focusing on K12 education. It is a traditional offline off-campus training institution Parallel Line Education online school brand. It first started in Zhengzhou, and then deployed throughout Henan Province, and entered Shenzhen, Hangzhou, Xi’an and Hefei. , Shijiazhuang and other cities.

"We used to mainly do offline courses, and now we have both online and offline business." Shenzhen Parallel Line customer service staff told the "Securities Daily" reporter that they are not clear about the order and have not received notification from relevant business departments.

It is a good thing for companies to take over, but it is still unknown whether the problems left over before can be handled.

In this regard, Pan Helin believes that online education is not a simple video surfing. The core competitiveness of the curriculum quality behind it is more important. Enterprises can easily gain the favor of capital during the bubble process, but after the bubble, they must return to online education itself.

The bursting of the bubble accelerates industry reshuffle

Since the outbreak of the epidemic, online education has been very hot, and many new companies have emerged.

During the epidemic, the education sector also received more financing, of which online education is most favored by capital.

According to statistics from iResearch Consulting, the education industry has raised a total of 116.4 billion yuan in 2020, of which online education financing amounted to 103.4 billion yuan, accounting for 89%.

However, it is undeniable that the homogeneity of online education companies is serious, and many needs are catalyzed by the epidemic, but the actual effect is not satisfactory.

Recently, the news that an off-campus training platform "Grapefruit Lianqin" ran away was reported by CCTV News.

Ms. Du, who signed up for the online training session, told a reporter from the Securities Daily that the child is in a critical period of learning piano. After the epidemic, offline institutions have been closed and they have to choose online, but the effect of learning musical instruments online is indeed mediocre.

In November last year, after Yousheng Education announced its bankruptcy, its founder, Chen Hao, said in a public apology letter, “Due to the broken capital chain, Yousheng is in a very bad situation. During the eight-month epidemic, our income was only the original. At the worst, it was less than 1/5 of the previous month."

The problems of online education once touted by capital are constantly being exposed.

In this regard, iResearch said that online education on the tuyere is "half of sea water and half of flame", and it is both sought after and controversial.

Difficulties will accelerate the reshuffle of the industry, and resources will be concentrated on good companies.

Chen Liteng, an online education analyst at the E-commerce Research Center of the Net Economics, told a reporter from the Securities Daily that online education companies have serious homogeneity competition, and platforms with solid internal skills will be the ultimate players, including teachers, teaching and research systems, business forms, management models, etc. .

"The traffic dividend brought by the epidemic has accelerated the polarization of online education companies. When capital is concerned about the company's revenue, growth rate and other indicators, it pays more attention to the health and scale potential of enterprise development." Zhai, head of Banyu Marketing Department Lei concluded. 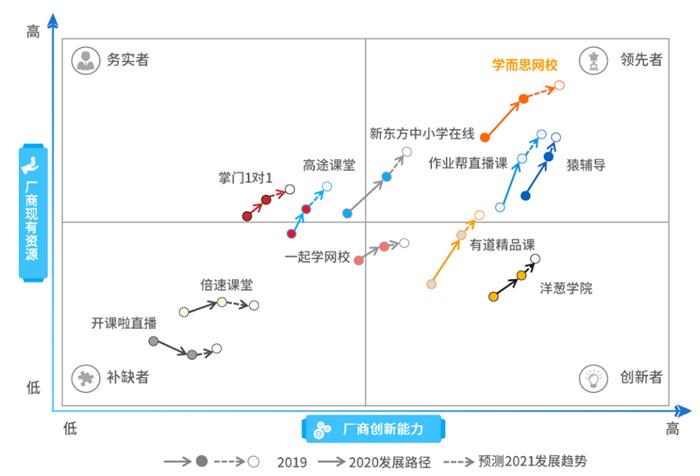 Business 2020-10-20T18:40:08.913Z
A record of eminent online course teacher: Behind the high salary is the high threshold, the famous teacher is also the product manager

Business 2020-10-20T23:36:57.436Z
A record of eminent online teachers: Behind the high salary are the high-threshold teachers and product managers

Life/Entertain 2020-10-21T01:01:26.334Z
A record of eminent online course teacher: Behind the high salary is the high threshold teacher is the product manager