Chinanews client, Beijing, January 28th (Zuo Yukun) Drinks are really harmful, you can't drink without drinks!   Who can reject a glass of soda in the hot summer or a hot drink in the cold winter? It is not difficult to see from the prosperous beverage market that many people still cannot resist the temptation to flow on the tip of the tongue.   People's hard to give up the "Fat House Happy Wa 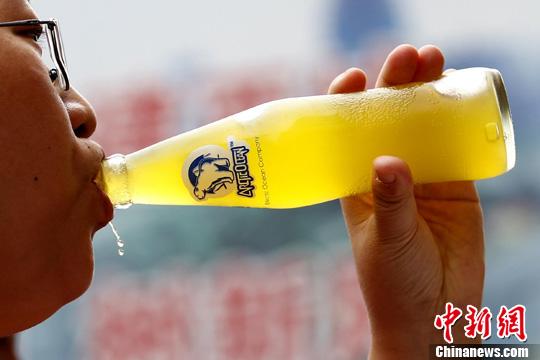 Who can reject a glass of soda in the hot summer or a hot drink in the cold winter?

It is not difficult to see from the prosperous beverage market that many people still cannot resist the temptation to flow on the tip of the tongue.

People's hard to give up the "Fat House Happy Water" has also made many drinks try to bloom in the capital market.

Recently, many old-brand beverages have gathered together and planned to go on sale.

At the end of last year, a news came that Red Star + Arctic Ocean + Yili wanted to "package" for listing. The 85-year-old Arctic Ocean wanted to use Dahao Technology to go to the capital market.

"Getting financial support after listing is more conducive to the institutional innovation and market development of old brands, from a regional brand to a national brand." Sun Wei, Tsinghua University Brand Marketing Research Institute once told the media.

This old brand, which started from small shops on the streets and has roots in the memories of the people in a specific area, seems to be making great strides to "catch up with the trend", but it is actually trying to make up for the "lost years."

In the 1980s and 1990s, when it comes to the king of soft drinks, such soft drinks as Coke, Sprite, and Fanta, which are now familiar to us, in front of the Arctic Ocean, we can only say that they are "brothers."

How beautiful was the Arctic Ocean back then?

On the first spring evening in 1983, a bottle of the Arctic Ocean was placed in front of the guests.

It is reported that in the three years from 1985 to 1988, a bottle of about a dime in the Arctic Ocean created an output value of 100 million yuan and a profit of 13 million yuan.

Under the living standards of the time, it was a veritable "king of domestic soda".

The loss of the "throne" began in 1994, when Chinese companies started a wave of joint ventures, and Arctic Ocean also joined hands with PepsiCo.

Unexpectedly, the domestically produced soda, which hoped to use foreign capital to expand operations and learn management and technology, was pitted.

The two giants took advantage of the cooperation to launch a "hunting" and then dominate the Chinese soda market.

This process was later described as the "Flooded Seven Armies".

The Arctic Ocean was also "snow hidden" shortly after the start of the cooperation, which was nearly 15 years old.

In 2011, Arctic Ocean returned to the world, and Yili Company, which obtained the management rights of Arctic Ocean, embarked on the road of "recovering lost ground" with the help of feelings.

Statistics show that in 2018 alone, the Arctic Ocean’s sales reached 600 million yuan and 12 million boxes were sold a year.

On September 14, 2011, hundreds of bottles of Arctic Ocean soda appeared in the Yili Bakery Chain Store on Nanwei Road in Dongcheng District, Beijing. They held a free tasting event, and people tasted the old taste.

"The Road of Feelings" has also attracted doubts about "sale of feelings".

In contrast, the top brands of Pepsi and Coca-Cola in similar products only sell for about 3 yuan per 500 ml bottle.

If the backdoor listing of Arctic Ocean is only a listed company, then among the domestic soda brands, the real impact "domestic soda stock" is the old Xi'an brand Bingfeng, which also focuses on orange soda.

When eating a fried chicken, a bottle of fat house water has become a happy meal for many young people, then Liangpi, meat sandwiches, and a bottle of Bingfeng form the food culture symbol of "Sanqin set meal".

Not long ago, news from the Shaanxi Securities Regulatory Bureau revealed that Bingfeng Beverage intends to be listed on the SME Board of the Shenzhen Stock Exchange.

It is not the first time that Bingfeng stands out in domestic soda.

Bingfeng also established a joint venture with PepsiCo in the battle of the "Flooded Seven Armies" that made domestic brands hate.

But the key to letting it escape is to sign an additional agreement with Pepsi to prohibit the other party from producing glass bottles in Xi'an.

This makes Pepsi can only sell canned cans in the catering channel, and the price is more expensive than Bingfeng, and finally had to give up the Xi'an market.

Bingfeng has therefore become a rare survivor of local brands in the "Flooded Seven Armies" battle.

Bingfeng, who has survived the "two music" attack, also relied on a strong distribution network and the recognition of Xi'an consumers to hold its ground and win the market back.

According to market surveys, Bingfeng's market share in Xi'an is about 80%.

Although from a national perspective, Bingfeng's revenue scale is not outstanding, but its net profit margin performance is quite impressive.

If the water sales business is included, Nongfu Spring, which went public last year, can be described as one of the most profitable companies in the domestic soft drink industry.

According to the prospectus disclosed by Nongfu Spring, its net profit margin in 2019 was 20.6%.

Source of screenshots: "Report on the filing application of Huachuang Securities Co., Ltd. on the initial public offering and listing of Xi'an Bingfeng Beverage Co., Ltd."

According to the filing announcement of the Shaanxi Securities Regulatory Bureau, Bingfeng's revenue has achieved steady growth in the past three years, and its revenue has further increased to 302 million yuan in 2019, with a net profit of 81 million yuan.

Based on this calculation, Bingfeng's net profit margin in 2019 is as high as 26.82%, which is much higher than Nongfu Spring, which shows its profitability.

In addition to the hot soda track, Dongpeng Beverage, which is the "back wave" in the functional beverage market, also reported the latest developments in its listing: On the evening of January 21, the China Securities Regulatory Commission announced that Dongpeng Beverage's first launch was approved, which means that the capital market Ushered in the "first share of functional drinks".

Many beverage brands have extended their tentacles to the capital market. Some brokerages believe that the registration system is expected to further expand to the main board and small and medium-sized boards, and the threshold for A-share listing will be lowered. This is a good opportunity for domestic companies, including soft drinks, to go public.

But what cannot be ignored is that the "what to drink" market has already undergone tremendous changes.

At the moment, the new tea-drinking track represented by the currently prepared Internet celebrity milk tea is in full swing and has also won the favor of more capital.

Only by gaining the favor of the younger generation can we stay young forever.

In this case, the "old guys" are also making changes.

As early as 2017, Arctic Ocean launched the peanut and walnut vegetable protein drink "Walnut Love" before the advent of the sugar-free wave; in 2019, Arctic Ocean also launched 13 new products at one time, including low-sugar, low-calorie and health-preserving products.

"Domestic old brand sodas can use more funds for brand rejuvenation and advertising. In addition, improving the level of product research and development and expanding competitiveness are also the key to development." said Shen Meng, director of Chanson Capital.

There were old rivals in the same industry who looked forward to it, and later, there was a new tea "back wave" eager to try.

Can the next Nongfu Spring appear on the drink track?