The first free trade agreement signed between China and developed countries has an upgraded version! 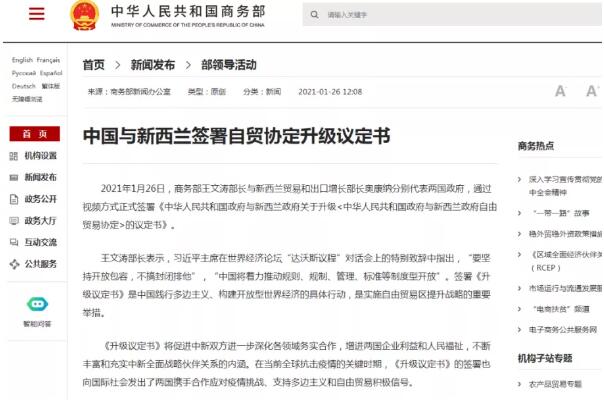 Screenshot of the official website of the Ministry of Commerce

The agreement was signed in April 2008 and formally entered into force in October of the same year.

What does the signing of the "Upgrade Protocol" mean?

What opportunities will the upgrade of the free trade agreement bring to my country?

How to grasp it?

The signing of the Escalation Protocol has an unusual background.

After China successfully concluded the "Regional Comprehensive Economic Partnership Agreement" (RCEP), and the China-EU Investment Agreement negotiations were completed as scheduled, the "Upgrading Protocol" not only realized that the China-Singapore Free Trade Agreement further improved the quality and efficiency of the RCEP, but also used practical actions. Declare to the world: China will strive to improve the level of free trade agreements, actively explore free trade rules that are in line with internationally accepted rules and meet the needs of its own reform and development, and expand opening to the outside world at a higher level.

For China and New Zealand, the signing of the "Upgrading Protocol" will also promote China and New Zealand to further deepen pragmatic cooperation in various fields, continuously enrich and enrich the connotation of the China-New Zealand comprehensive strategic partnership, and enhance the interests of businesses and people of the two countries.

In the critical period of the global fight against the epidemic, the signing of the "Upgrading Protocol" also sends a positive signal to the international community that the two countries will work together to address the challenges of the epidemic, support multilateralism and free trade, and promote a stable recovery of the global economy.

According to the introduction of the Ministry of Commerce, the "Upgrading Protocol" amends the original free trade agreement. It consists of a preamble, 9 chapters, and 4 exchanges of letters, except for the original agreement’s rules of origin, customs procedures, trade facilitation, and technical trade barriers. In addition to upgrades in five areas, including e-commerce, service trade, and cooperation, four new areas have been added, including e-commerce, government procurement, competition policy, and environment and trade.

Among them, the two parties have adopted 4 exchanges of letters to upgrade the attachments such as the specific commitment table of trade in services, and reached a consensus on new investment, movement of natural persons of characteristic types of work, cosmetics trade, and tariff reduction of wood and paper products.

For example, with regard to the opening of service trade, both parties have made greater openness commitments in terms of market access, which has greatly expanded the scope of MFN commitments.

In addition, the two parties agreed to carry out follow-up negotiations on trade in services in the form of a negative list within 2 years after the "Upgrading Protocol" comes into effect to further increase the level of openness.

Regarding the exchange of letters of Chinese-funded enterprises on new investments, Singapore has relaxed its review of Chinese-funded investors: the investment review threshold for Chinese government investors has been significantly increased from S$10 million in the original China-Singapore Free Trade Agreement to S$100 million , The threshold for review of non-government investors reached S$200 million.

In this upgrade agreement, New Zealand doubles the quotas for Chinese language teachers and Chinese tour guides who have applied for a large number of Chinese citizens for new employment, from 150 and 100 to 300 and 200 respectively, and further relaxes the categories of Chinese tour guides. Work visa review conditions.

In addition, there are also varying degrees of upgrades in terms of rules of origin and management, customs procedures and trade facilitation, technical trade barriers, e-commerce, environment and trade.

Fully prepare for the full use of free trade agreement dividends

The signing of the "Upgrading Protocol" is a concrete manifestation of China's "implementation of the free trade zone promotion strategy and building a global high-standard free trade zone network."

Not long ago, Minister of Commerce Wang Wentao especially emphasized at the opening ceremony of the RCEP online special training class to make good use of the dividends brought by RCEP and maximize the effectiveness of RCEP.

With the formal signing of a series of agreements such as the "Upgrading Protocol" and even RCEP, it will provide an important starting point for my country to build a new system of higher level open economy in the new era. Therefore, in order to make full use of the agreement dividends, it is necessary to make sufficient advances in advance. ready.

On the one hand, we must firmly seize the opportunities brought by the relevant agreements in the liberalization and facilitation of trade in goods, the two-way expansion of trade in services and investment, and the improvement of the business environment.

Take service trade as an example. The countries involved in the agreement are often my country’s important service investment cooperation target countries. They also provide information in the construction, transportation, logistics, medical, finance, research and development and other service sectors that China focuses on, as well as manufacturing and mining. With high-level openness commitments, we must also be good at tapping the potential of overseas markets, fully relying on the agreement platform, and actively guiding companies to "go overseas" to open up markets, and to serve the "Belt and Road" strategy with high quality.

On the other hand, it is also necessary to properly prevent and control risks to escort high-level opening.

Among them, we should make good use of trade remedies and other measures to safeguard our development interests, and at the same time give full play to the comprehensive advantages of our country's industry, properly respond to the risks brought by the restructuring of the industrial chain, and learn to use internationally accepted rules to effectively safeguard national and industrial interests.

For example, import tariffs have been reduced, and the price advantage of imported goods has gradually emerged. Related industries must be fully prepared to face challenges and continue to grow in competition.

Governments at all levels should also be good at using trade remedies such as anti-dumping and countervailing measures in the agreement to fully safeguard the safety of our industry, help companies properly deal with possible shocks, seek advantages and avoid disadvantages in RCEP, and provide time, space and conditions for industrial transformation and upgrading .