Five indicators that show the virulence of the crisis ... and that anticipate very hard months still

The National Institute of Statistics (INE) announced yesterday the hotel overnight stays at the end of 2020 and the turnover of the companies until November. Both data show ... 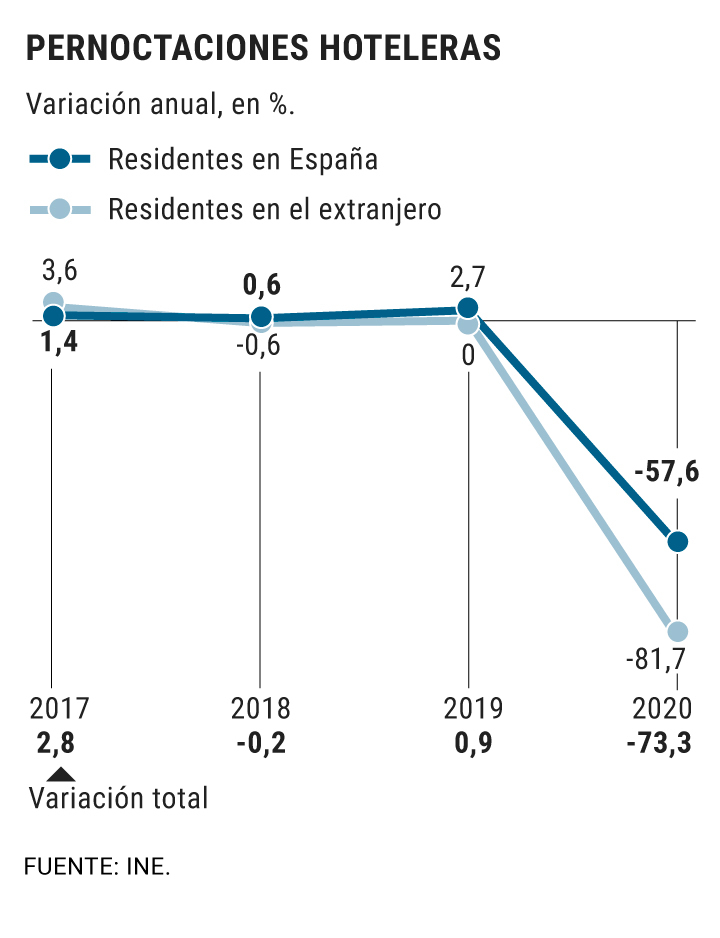 The National Institute of Statistics (INE) announced yesterday the hotel overnight stays at the end of 2020 and the turnover of the companies until November.

Both data show the virulence of the economic crisis that the covid pandemic has unleashed, and join others known in recent days that, in addition to highlighting this same circumstance, show that there are still very hard months for the economy and, therefore So much for the population.

In the whole of year 2

", said the INE this Monday. Obviously, this is the biggest collapse in history, as is the case with practically all data for 2020, and its magnitude may be appreciated even better in total figures: the number of overnight stays went from more than 340 million in 2019 to 91.6 million last year.

Especially notable was the collapse among foreign residents, and statistics show the harsh reality of one of the pillars of the Spanish economy: tourism is suffering a lot and its recovery, moreover, is going to be delayed.

The general index of turnover

the annual rate being -10.6% in the series adjusted for seasonal effects and -9.4% in the original series.

Not even the campaign of

was able to avoid this worrying data that threatens to persist for months to come.

Directly related to the above, and also as a consequence of it, is the following indicator:

crisis until at least 2022, later that year or even never will.

The survey carried out among 8,000 businesses from different economic sectors that the INE included in its Business Confidence Indicator (ICE) last Friday shows this, and that 66% of companies is distributed as follows: a third expect the recovery of the level of employment comes next year, 13% believe that they will have to wait even longer and 12% believe that they will never return to that same pre-covid situation.

Banking entities have an indicator that shows very reliably what is the behavior of a variable as important to the Spanish economy as consumption: spending on cards.

And according to the data of what will be the entity with the highest volume of business in Spain, CaixaBank, the figures are not at all positive.

in the second week of January ", they explain in a recent report from the entity's research service." The activity of Spanish cards registered a fall of 10% year-on-year, "they add, although the variable that is even more worrying is the foreign spending: "It remains stagnant in very negative records and

year-on-year during the second week of January. "" A clear setback compared to the previous week, "conclude CaixaBank Research, conditioned by the Filomena storm but also, of course, by the economic crisis and restrictions on travelers.

With all of the above, in addition to the expected rise in unemployment, doubts in the development capacity of European funds and even political turmoil within the Government, the GDP growth expected for this year is far from the official figure of almost 10%.

According to the Funcas panel, which collects the opinion of 20 analysis firms, study services and entities,

Or put another way: the crisis will last longer than the Government wants to recognize and it will cost more to return to the starting point.