The social media blocking of the accounts of the outgoing US President, Donald Trump, against the backdrop of the events of the "Capitol" Congress, raised questions about whether this ban was the beginning of the end for the major technology companies, which suffered great losses during the past week, as it retreated 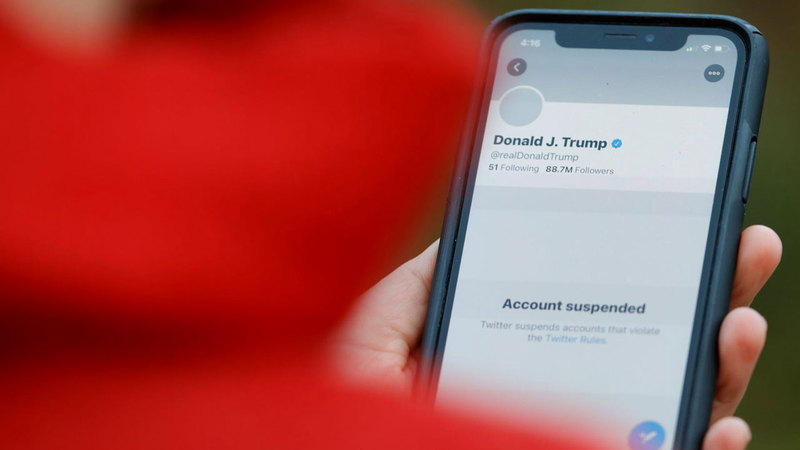 Social media cracked down on Trump for inciting violence.

The social media blocking of the accounts of the outgoing US President, Donald Trump, against the backdrop of the events of the "Capitol" Congress, raised questions about whether this ban was the beginning of the end of the major technology companies, which suffered big losses during the past week, as the value of Facebook shares declined Facebook »34 billion dollars, while Twitter lost five billion dollars.

And US media indicated that the media campaign against Trump has also reignited the debate over freedom of expression on the Internet.

In detail, after supporters of the US President, Donald Trump, stormed the Capitol building last week, in an attempt to cancel the outcome of the presidential election that his rival Joe Biden had won, the technology giants were forced to take action against Trump, as Twitter suspended sites. And "Facebook", "Instagram" and "Snapchat", the accounts of the outgoing president, indefinitely.

Apple, Google and Amazon also blocked the use of the Parler app used by Trump supporters.

US media reported that the social media campaign against Trump for his incitement to violence has reignited the debate about freedom of expression on the Internet on the one hand, while on the other hand it raised the question about whether the ban was the beginning of the end for the major technology companies that suffered big losses. Over the past week.

She indicated that the threat of the outgoing US President, Donald Trump, lies not only in excluding him from returning to the White House in 2024 in Washington, but also extending to the major technology companies, which launched an unprecedented campaign on the president's propaganda trumpets.

"We understand the desire to permanently curb President Trump's propaganda trumpets, but when companies such as Facebook and Twitter exercise power that is not the same," the Financial Times quoted the senior legislative advisor to the American Civil Liberties Union, Kate Rowan, as saying. Restricted to remove people from the platforms, this is a matter of concern ».

"Banning people on communication platforms is the beginning of the end of the big tech companies," Scott Galloway, a marketing professor at New York University's Stern School of Business, told the editor of Yahoo Finance.

Galloway said that “with the Democrats actually surpassing the House and the Senate, this could make it easier for lawmakers to pass a law to amend Section 230 of the Communications Act, which gives websites broad legal immunity to the content that others post on them, as that section protects interactive platforms. "From exposure to legal liability, if a user publishes content through it that fuels violence."

Galloway pointed out that the past year witnessed unprecedented measures taken against major technology companies, as the US Department of Justice accused Google of illegal monopolizing searches and advertising, and the Federal Trade Commission also accused Facebook of monopoly.

In addition, the value of the shares of Facebook fell 34 billion dollars, by 4.5% during the past week, as investors continued to refuse to ban President Donald Trump's account on the company's famous platform.

Twitter also lost about $ 5 billion of its market value, after Trump was permanently banned from entering its platform, where the number of followers of the US President reaches about 88 million followers.

The outgoing US President Donald Trump has promoted the possibility of creating his own platform to communicate with his performers, but this matter may face strictness from Internet hosting service providers.

Many questioned whether Facebook decided to make its ban on the president permanent.

Angelo Carosson, CEO of the non-profit Media Matters, said: "If the ban (Facebook) of Trump is temporary, the president may leave Twitter and become (Facebook) his main means of communication."