Chinanews client, Beijing, January 11 (Reporter Xie Yiguan) According to data released by the National Bureau of Statistics on the 11th, in December 2020, the national consumer price (CPI) rose by 0.2% year-on-year, from negative to positive year-on-year; for the whole year of 2020 CPI rose by 2.5%, fulfilling the target of a 3.5% increase in consumer prices. The trend chart of the same month- 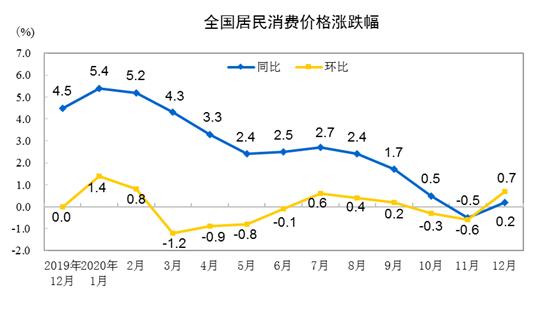 Chinanews client, Beijing, January 11 (Reporter Xie Yiguan) According to data released by the National Bureau of Statistics on the 11th, in December 2020, the national consumer price (CPI) rose by 0.2% year-on-year, from negative to positive year-on-year; for the whole year of 2020 CPI rose by 2.5%, fulfilling the target of a 3.5% increase in consumer prices.

The trend chart of the same month-on-month rise and fall of CPI.

In December 2020, the CPI changed from negative to positive year-on-year

According to Dong Lijuan, a senior statistician at the City Department of the National Bureau of Statistics, “In December 2020, the CPI went from a 0.5% year-on-year decline to an increase of 0.2% from the previous month. Among them, food prices changed from a 2.0% decline last month to an increase of 1.2%, which will affect the CPI. Up by about 0.26 percentage points."

“As the New Year’s Day and the Spring Festival approach, demand increases seasonally, and at the same time feed costs rise, the price of pork has increased by 6.5% month-on-month, down 1.3% year-on-year, and the rate of decline narrowed by 11.2 percentage points. Affected by the low temperature weather, the production of fresh vegetables and fruits has slowed , Storage and transportation costs are increasing, and prices are also rising." Liu Xuezhi, a senior researcher at the Financial Research Center of the Bank of Communications, told a reporter from Chinanews.com.

In addition, non-food prices fell from 0.1% last month to flat.

"The core CPI, excluding food and energy prices, rose 0.4% year-on-year, and the increase was 0.1% lower than the previous month." Dong Lijuan pointed out.

The picture shows the pork section of a vegetable market in Fengtai District, Beijing.

The full-year increase in 2020 completes the price control target

According to data from the National Bureau of Statistics, in 2020, national consumer prices will rise by 2.5% over the previous year, achieving the annual price control target of about 3.5%.

Judging from the year-on-year growth and decline chart of the CPI in 2020, the whole year's prices were high and low.

It is worth mentioning that in 2021 my country's CPI statistics will usher in a new round of base period rotation, which means that the CPI "commodity basket" and corresponding weights may undergo major adjustments.

Food prices are rising, what is the future trend of CPI?

Pork prices have rebounded recently after falling for more than two months.

According to the monitoring of the Ministry of Agriculture and Rural Affairs, the wholesale price of pork began to rise from the 47th week of 2020, and to the first week of 2021, it has risen for 7 consecutive weeks, an increase of 16.67%.

The price of pork and other foods has "rising", will the CPI rise again in the later period?

"Generally speaking, with the recovery of domestic pig production capacity, the conditions and basis for a sharp increase in pork prices are not available, and there is support and conditions for the price to remain stable." Fu Linghui, spokesperson for the National Bureau of Statistics, said. In terms of future development, there are many favorable conditions for the stable operation of consumer prices. As economic operations gradually return to normal, the increase in consumer prices will return to a reasonable level.

"Affected by tail-lifting factors and overall demand is still weak, the year-on-year increase in CPI in the first quarter of 2021 may be negative. As demand gradually recovers, the year-on-year increase in CPI is expected to gradually return to positive after the second quarter, and inflation is expected to be moderate throughout the year. "Liu Xuezhi pointed out.

According to Zhang Yu, chief macro analyst at Huachuang Securities, in 2021, on the way back to the global economic recovery, CPI is expected to achieve a low reversal.

"It is estimated that the CPI center will be around 1% in 2021. Rhythmically, the CPI will rise unilaterally in the first half of the year, and may fall into shocks in the second half, and the mid-year high may reach about 1.5%." (End)