"Pig is strong", "Sheep noble concubine" and "Bull Demon King" are here! Why is the price of meat rising? 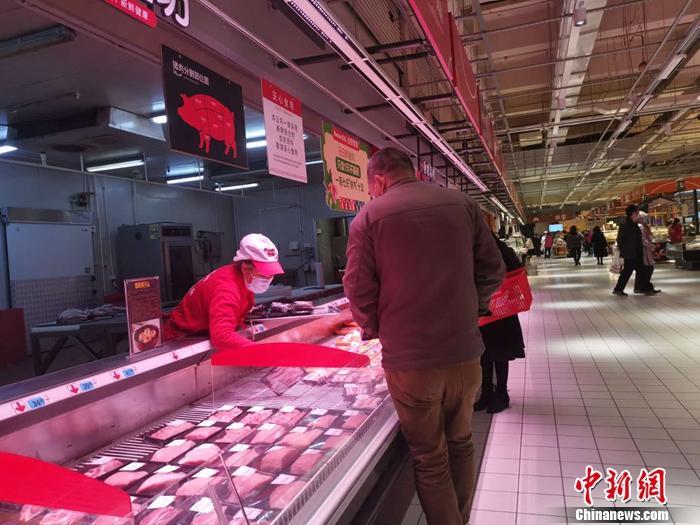 Chinanews.com client, Beijing, January 9th (Reporter Xie Yiguan) When you see "pork prices have fallen for more than two consecutive months" and think that pork prices will go "downhill" from now on, you did not expect "Second Senior Brother" to kill Back to the carbine, hand in hand with "Lady Noble Concubine" and "Bull Demon King" high-profile announcement: "Brother, be strong!"

"Pig is strong" is here again

According to the “National Agricultural Products Wholesale Market Price Information System” monitored by the Ministry of Agriculture and Rural Affairs, after more than two months of decline, the wholesale price of pork began to rise from the 47th week of 2020 to the first week of 2021 for 7 consecutive weeks, from 39.36 yuan /Kg rose to 45.92 yuan/kg, an increase of 16.67%.

It is worth mentioning that in the 51st week of 2020, the wholesale price of pork has turned positive again after 9 weeks.

This also means that since the end of 2020, pork wholesale prices have once again been higher than the same period last year.

According to the designated monitoring by the Ministry of Agriculture and Rural Affairs of the country’s 500 county fairs and collection points, in the fifth week of December 2020, the national average price of live pigs was 34.80 yuan/kg, up 3.2% from the previous week and 4.6% year-on-year.

After combing, it is found that the national live pig price has been rising for 6 consecutive weeks.

Although from the data point of view, the wholesale price of pork has turned positive year-on-year, the reporter visited many vegetable markets and supermarkets in Beijing and found that although the retail price of pork has increased recently, the overall price is lower than the same period last year.

"In the fourth quarter of 2020, pork has experienced a wave of price cuts. The minced meat and bones have fallen below 20 yuan, and the pork belly has also declined, but recently the top price has risen again." At a vegetable market in Fengtai District, Beijing, A resident told a reporter from Chinanews.com.

The picture shows the pork section of a vegetable market in Fengtai District, Beijing.

"Before New Year's Day, the front tip dropped to 24.5 yuan a catty, and recently it rose to 26.5 yuan. However, the price was cheaper than during the Spring Festival in 2020, which was about 33 yuan a catty at that time." The stall owner explained.

"Eat lamb and ginseng in winter." As soon as winter comes, lamb is sought after by many people, but now some people ridicule to "see the sheep and sigh."

According to data from the Ministry of Agriculture and Rural Affairs, in December 2020, the average price of mutton in the national agricultural product wholesale market was 72.26 yuan/kg, an increase of 4.6% month-on-month and 6.0% year-on-year.

The wholesale price of beef has also risen continuously. In December 2020, the average beef price in the national agricultural product wholesale market was 76.33 yuan/kg, an increase of 0.8% month-on-month and an increase of 8.6% year-on-year.

Data map: A beef and mutton stall in a vegetable market in Xicheng District, Beijing.

"The price of lamb in the store has now risen to 48 yuan per catty, which is the same as the price of beef tenderloin, and beef ham is 42 yuan per catty." A staff member of a beef and mutton shop in Fengtai District, Beijing told reporters.

According to the staff member, “Lamb has just risen in the last ten days, and it was 45-46 yuan before. Beef prices have not changed much since the second half of 2020. The hind leg meat has probably risen by 2 yuan and the tenderloin has risen by 3 yuan. yuan."

"Now customers ask me every day why the price of beef and mutton has risen so high." The staff member said, "Due to the epidemic, the number of imported meat has fallen. Now the store sells domestic beef and mutton. Why can the price not rise?"

Why did meat prices rise collectively?

"Pigs are strong", "Sheep noble concubine", and "Bull Demon King" have come here one after another. "On the one hand, due to the peak season of traditional meat consumption, the demand is large. On the other hand, meat supply will decrease in 2020. Meat is in short supply." Gao Guan, vice president of China Meat Association, told a reporter from Chinanews.com.

According to data released by the General Administration of Customs, from January to November 2020, my country's total import of mutton was 336,200 tons, a year-on-year decrease of 5.32%.

"As of 24:00 on November 11, 2020, China has taken measures to suspend imports of 99 manufacturing companies in 20 countries where employees have been infected with new crown pneumonia." Bi Kexin, director of the Import and Export Food Safety Bureau of the General Administration of Customs of China, previously announced Said at the meeting.

While the import volume of some meat has decreased, the volume of domestically produced meat has also fallen.

According to data from the National Bureau of Statistics, in the first three quarters of 2020, the national output of pork, beef, mutton and poultry was 52.51 million tons, a year-on-year decrease of 4.7%.

In addition to the imbalance between supply and demand, rising costs for breeding, transportation, and labor are also a factor.

According to Tang Ke, Director of the Department of Market and Information Technology of the Ministry of Agriculture and Rural Affairs, after the Spring Festival in 2020, corn prices, as an important feed variety, began to recover. In November, the average wholesale price of corn in the production areas was 1.2 yuan per catty, a year-on-year increase of 29.7%. , An increase of 31.8% from the beginning of 2020, and the price level hit a six-year high.

Will the price increase of pork, beef and mutton affect our New Year's Eve dinner?

"The production capacity and supply of the main varieties of'vegetable baskets' during the Spring Festival are guaranteed. If a wide range of low-temperature rain and snow disasters do not occur, it is unlikely that prices will fluctuate significantly." Tang Ke also pointed out.

According to Tang Ke, pork prices are expected to stabilize after a small increase in different varieties.

In November 2020, the stock of reproductive sows has increased year-on-year for 6 consecutive months, and the stock of live pigs has increased year-on-year for 5 consecutive months. Pork supply during the Spring Festival is expected to increase significantly over the same period last year. Pork prices will be driven by demand before the Spring Festival. It fluctuates slightly and rises.

"The stock of beef cattle and mutton sheep will increase month-on-month at the end of the third quarter of 2020, and the year-end production will continue to increase. However, imports are affected by the epidemic and there is greater uncertainty. Affected by the peak consumption season of the Spring Festival, the price of beef and mutton will show a steady increase "Tang Ke said.

In addition, the state is also doing a good job in putting meat from the central reserve in accordance with market changes.

Have you bought meat recently?

Is there any price increase?