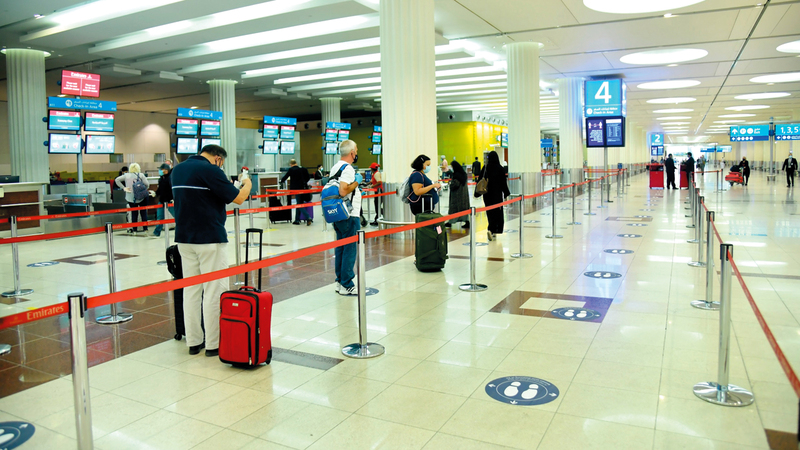 Passenger traffic through "Dubai Airport" recorded its highest rate during last December since the start of "Corona".

The latest data released by the list of the world's largest airports, in terms of the number of international travelers, showed that Dubai International Airport has ensured maintaining its position as the largest international airport in the world, for the seventh year in a row, in 2020 as a whole.

According to the latest data issued by the Dubai Civil Aviation Authority, the total number of passengers at Dubai International Airport, during the period between January and November 2020, reached about 24.3 million passengers, while the airport recorded continuous growth, since last April, after the closure period due to the 'Covid' pandemic -19 ».

Like all airports in the world, international passenger traffic has been affected by the travel restrictions due to the outbreak of the pandemic. However, Dubai International is on its way to maintain its first position as the largest international air transport crossing in the world.

According to an initial survey conducted by Emirates Today, of the data of the largest international airports, during the first 11 months of last year, the total number of passengers, through London Heathrow Airport, which is ranked second in the list of the largest international airports in the world, reached about 19 million international travelers. While the total number of passengers, through "Amsterdam Schiphol" International Airport, which is classified in the third place, reached about 19.6 million passengers by the end of last November.

Dubai Airports Corporation reported that passenger traffic, through Dubai International Airport last December, recorded its highest rates since the start of the Corona pandemic, indicating that the airport serves thousands of passengers daily, in addition to "transit" passengers.

The Corporation stated that the total number of destinations served by air carriers through Dubai Airport has crossed the 140-point mark.

Dubai Airports works closely with its service and commercial partners, including more than 50 international airlines.

The Corporation implements a series of precautionary measures throughout the airport to maintain the health and safety of dealers and employees, while increasing the levels of cleaning and sterilization in accordance with international standards as stipulated by the relevant local authorities.

It is noteworthy that Dubai International Airport, which was inaugurated on September 30, 1960, removed its counterpart, London Heathrow, from the first place in the number of international passengers during 2014, for the first time in history, after the British airport maintained the lead, since the start of commercial air transport in the world.