The price of paper has risen to the point of pork, so do you want to stock up toilet paper?

Chinanews Client Beijing, January 5th (Reporter Xie Yiguan) Rising! rise! rise! Before December 2020, you might not have imagined that a small piece of paper can rise to the speed of a "rocket". Paper companies set off a wave of price increases   As the new year is approaching, KPIs are being used for food. Following the hot search on "pork price rebound", the recent "price increase of tissue 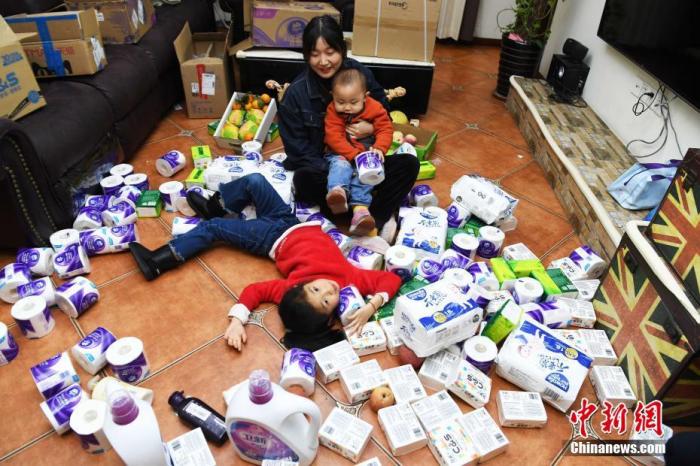 Before December 2020, you might not have imagined that a small piece of paper can rise to the speed of a "rocket".

Paper companies set off a wave of price increases

As the new year is approaching, KPIs are being used for food.

Following the hot search on "pork price rebound", the recent "price increase of tissue paper in many places across the country" has also rushed into hot searches.

Household paper ushered in three consecutive rises in one month, "Are we going to grab paper towels?" Some netizens commented.

Data map: Paper towels and other daily necessities hoarded by a second-born mother.

In fact, not only household paper, but also cultural paper has also increased in price.

In November 2020, leading paper companies, including APP, Sun, Chenming, Huatai, etc., issued price increase letters one after another, raising the price of their own cultural paper by 200 yuan/ton, which will be implemented in December 2020.

After sorting out, this is not the first price increase of cultural paper this year.

Since August 2020, paper companies have frequently issued price increase letters, and some coated paper products have increased their prices by about 600-800 yuan/ton so far.

According to the research report of Zhongtai Securities, as of November 21, 2020, the average price of white cardboard was 6713 yuan/ton, an increase of 16.6% from the beginning of the year and an increase of about 30% from the lowest point in the year.

Why are the prices of paper and tissues rising?

From the perspective of the industry, the main reason is that the price of raw material pulp has increased, which has led to increased papermaking costs.

In terms of raw materials, the price increase of paper and paper towels is closely related to wood pulp.

According to data, the paper pulp currently on the market is mainly divided into three types: wood pulp, non-wood pulp and waste paper pulp.

Zhuo Chuang Information analyst Chang Junting introduced to a reporter from Chinanews.com that China's wood pulp import dependence rate is above 60%. China's softwood pulp imports fell by 1.44% in the first 11 months of 2020. Global softwood pulp was shipped to China in November. In terms of domestic wood pulp, the output of hardwood pulp from January to November 2020 increased by 2.40% year-on-year, and the output of chemical mechanical pulp increased by 11.03% year-on-year, but in November, hardwood pulp, The output of chemical machinery pulp fell by 3.78% and 3.29% respectively from the previous month, and the supply was also slightly tightened.

In terms of non-wood pulp, “in November 2020, bamboo pulp manufacturers will focus on maintenance, and the monthly start load is 41%, down 6 percentage points from October. The stock of pulp mills has fallen. In December, the inventory pressure of pulp mills is not strong, and the cost of raw bamboo chips will increase. And so on, bamboo pulp manufacturers increase the disk size by 200-400 yuan/ton." Zhuo Chuang Information analyst Geng Sai pointed out.

Data map: In April 2020, workers from a company were sorting out toilet paper to be exported.

The price hikes of paper and tissues that started at the end of 2020 were also affected by the cessation of production capacity under environmental protection policies, the suspension of machine-made paper equipment at the end of the year, and the rise in pulp futures.

Under the "ban on waste", the price of waste paper also rose sharply

In addition to cultural paper and household paper, under the leadership of leading packaging paper companies such as Nine Dragons, corrugated paper, box paper, white paper and other packaging papers have also been reported to increase prices.

Under the dual big move of "downtime + price increase", the price hike of cardboard is also coming.

Packaging paper manufacturers have raised prices one after another, and the "ban on scrap" is a major factor.

In July 2017, the State Council issued the "Implementation Plan for Prohibiting the Entry of Foreign Waste to Promote the Reform of the Solid Waste Import Management System", which greatly reduced the types and quantities of imports.

With the tightening of import quotas, China's imports of waste paper show a downward trend.

According to media reports, the first-class waste containerboard paper was basically stable at around 1,200 yuan/ton before 2017, and began to fluctuate and rise in 2017, and the current price basically maintains above 2,000 yuan/ton.

In November 2020, the National Development and Reform Commission, the Ministry of Ecology and Environment, the Ministry of Commerce, and the General Administration of Customs jointly issued the "Announcement on the Total Prohibition of the Import of Solid Waste", expressly prohibiting the import of solid waste in any way, starting from January 1, 2021 Implement.

Under the "zero import" of waste paper, paper mills have increased their raw material inventories, which has driven the price of waste paper to accelerate.

Chang Junting said, “Under the influence of zero imports of waste paper at the end of the year, the shortage of packaging paper raw materials stimulated domestic and foreign pulp mills to switch to natural pulp, which indirectly supported the price of softwood pulp, which in turn increased the pressure on the cost of downstream household paper to a certain extent.”

"Luoyang Paper Expensive" is going to be

"Currently, the price of tissues in the supermarket has not risen, and some products are still on sale." A resident told reporters.

"The rise in the price of household paper is also carried out in the market ring by ring. Raw paper companies first began to adjust prices. After downstream processing plants, the end market (such as supermarkets, e-commerce platforms, etc.) responded relatively lagging behind, and the price of raw paper was adjusted more frequently. Adjusted in ton, even if the terminal is the same as the increase, it is implemented on the finished paper of each retail unit, the increase is not obvious, and there are still irregular promotions in some markets." Zhuo Chuang Information Analyst Yin Tingxiang The reporter said.

According to media reports, in order to sink the balance of supply and demand in the market, the Hebei factory rushed to directly supply paper towels at affordable prices and started the "defense war" of paper towels.

It is understood that Baoding, Hebei occupies nearly 30% of the national tissue market share.

Data map: On April 24, workers of a paper company inspecting the quality of the toilet paper production line.

As for packaging paper, the price increase of upstream paper products has indeed led to increased cost pressures in the downstream packaging industry.

“Recently, the price of the packaging paper used by the company has risen a bit, about 100-200 yuan per ton.” A staff member of Dagong Paper Packaging (Beijing) Co., Ltd. told a reporter from Chinanews.com that due to the increase in purchase prices, the cost of the company’s products has increased. Profits have been compressed.

"However, the company's products have not raised prices at present, and it is hard to say whether there are plans to raise prices in the future." The above-mentioned staff member said.

Some paper-making companies also process waste paper into semi-finished pulp and import it into China by building factories overseas.

"2020 is the peak period for leading papermaking companies to put into production, and new capacity in 2021 is expected to contribute to production throughout the year." CICC research report believes that with better demand and rising raw material prices, the paper industry is expected to see an upward trend in 2021. The price centers of cardboard, white cardboard, and cultural paper are all expected to usher in a year-on-year improvement.