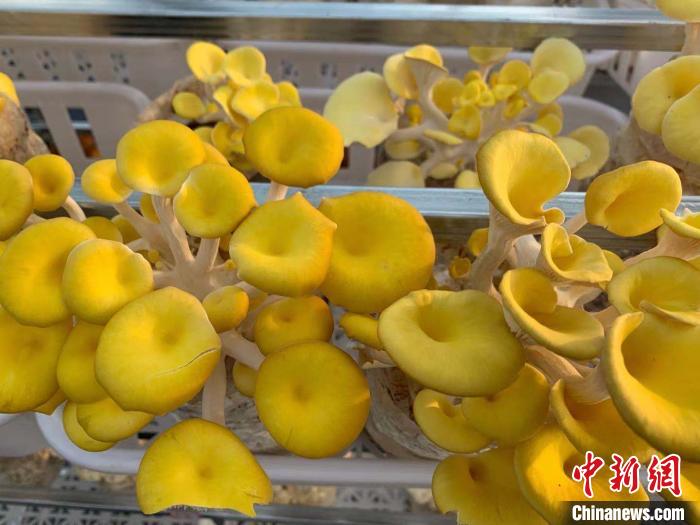 Chinanews.com, Suizhou, Hubei, December 25 (Wu Yili) Mellow thick mushrooms, round and delicious hericium mushrooms, golden yellow citrus mushrooms...2020 Hubei Suizhou Shiitake Mushroom Industry Expo on the 25th in Suizhou Yandi's hometown scenic spot At the opening, more than 700 products from more than 200 companies across the country, as well as the latest achievements and cutting-edge technologies of the entire industrial chain of shiitake mushrooms were unveiled.

The picture shows the Ulmus pumila mushroom exhibited at the fair.

The city's edible fungus output is 91,100 tons, and there are 185 mushroom enterprises. More than 300,000 people are engaged in the mushroom industry all year round. The output value of the industrial chain has exceeded 30 billion yuan (RMB, the same below).

Pictured by Wu Yili of Hericium

After more than 40 years of development, Suizhou, one of China's four major mushroom producing areas, has become an important domestic mushroom processing and export base.

In the context of the impact of the epidemic this year, the export of agricultural products such as Suizhou mushrooms has bucked the trend, with an export value of 4.73 billion yuan, accounting for 35.62% of Hubei's total agricultural exports, ranking first in the province.

The reporter saw in the Suizhou exhibition area that the "GOOD LUCK" brand mushroom sauce independently developed by Pinyuan Modern Agriculture Company attracted many citizens to stop and taste.

The company is the first mushroom paste export company in Hubei Province. It exported to Central and South Asia for the first time in July 2018 and successfully entered the US market in November 2019.

In August of this year, the newly-built automated production workshop for 10,000-ton mushroom condiments was officially put into operation, which took a leap forward in the development of deep processing.

23 projects were signed in a concentrated manner, involving the research and development of bacteria, large-scale planting, intensive processing, machinery manufacturing and other industrial fields, with an estimated investment of more than 3 billion yuan.

It is reported that this Expo is hosted by the China Edible Fungus Association, Hubei Provincial Department of Agriculture and Rural Affairs, and the People's Government of Suizhou City. It uses online and offline organic integration to build an important platform for cultural exchanges, technological innovation and trade exhibitions for Chinese and foreign companies.

The picture shows a variety of mushrooms displayed in the greenhouse. Photo by Wu Yili

The picture shows the online celebrity anchor is carrying the goods in the live broadcast room of the "Mushroom Expo on the Cloud". Photographed by Wu Yili