The country has spoken! New Year, there will be no shortage of meat or vegetables in the bowl

Chinanews client, Beijing, December 24th (Reporter Xie Yiguan) "Food is the heaven for the people." New Year's Day and the Spring Festival are coming soon. Will the people lack food, oil, meat and vegetables? On December 24, the Ministry of Agriculture and Rural Affairs held a press conference to introduce the current market situation and production situation of my country's grain and major agri 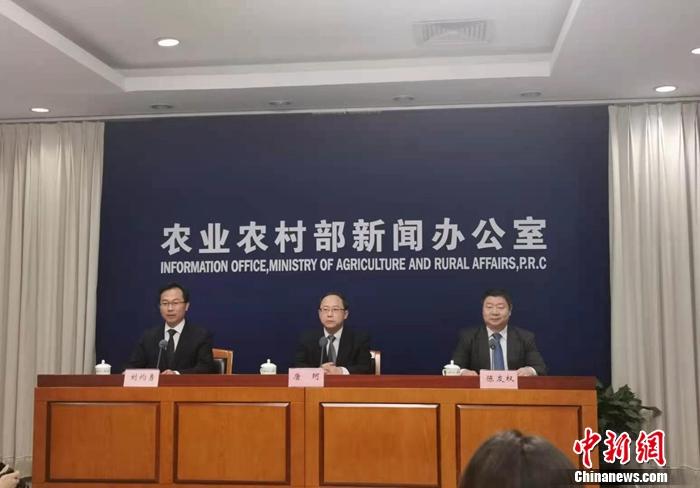 On December 24, the Ministry of Agriculture and Rural Affairs held a press conference to introduce the current market situation and production situation of my country's grain and major agricultural products during the Spring Festival and during the New Year's Day.

On December 24, the Ministry of Agriculture and Rural Affairs held a press conference.

According to Tang Ke, director of the Department of Market and Information Technology of the Ministry of Agriculture and Villages, from the current situation, the production of live pigs has continued to recover. The price of pork has fallen for three consecutive months. Recently, driven by demand, the price of poultry, poultry and eggs has been running at a low level; , Fruit prices fluctuate seasonally, which is basically in line with the perennial law. Some small varieties such as onion and ginger have increased significantly, but the supply of vegetables is generally guaranteed.

"The domestic agricultural product market is expected to remain stable next year, especially during the New Year's Day and Spring Festival. The total supply of key varieties of the'vegetable basket' is sufficient and the varieties are abundant. Urban and rural residents will not lack meat or vegetables in their bowls." Tang Ke said that consumption during the festival will promote peace. Supported by the increase in production and distribution costs, the overall price of agricultural products is expected to fluctuate seasonally, but the possibility of a sharp rise is unlikely.

Tang Ke said that in terms of varieties, pork prices are expected to stabilize after a slight increase.

"The production capacity of poultry stock is at a relatively high level over the years, the market supply is guaranteed, and prices will not rise significantly. The stocks of beef cattle and mutton sheep have increased month-on-month at the end of the third quarter, and the year-end production will continue to increase, but imports will be affected by the epidemic. Larger. Affected by the peak consumption season of New Year's Day and Spring Festival, beef and mutton prices tend to rise steadily. This year, vegetable growers are highly enthusiastic in production, and the overall supply capacity of winter and spring vegetables has risen steadily. Vegetable prices will operate on a regular basis. With high yield and sufficient market supply, prices will continue to rise slightly seasonally driven by demand.” Tang Ke pointed out.

However, green onion and ginger as a condiment vegetable account for a relatively small proportion of the total vegetable production and sales, and price fluctuations will not change the overall situation of my country's adequate supply of vegetables.

"In the next step, the Ministry of Agriculture and Rural Affairs will take targeted measures to do a good job in the production and supply of important agricultural products during the holiday season to prevent poor production and sales due to sudden epidemics or catastrophic weather, and effectively guarantee the demand for the'vegetable basket' products of urban and rural residents. "Tang Ke said.

The "rice bag" is very stable and

will not be short of food or oil during the

Affected by the concentrated outbreak of the new crown pneumonia epidemic this year and the reduction of grain production in some countries due to weather and pest problems, international food prices have fluctuated, which has also caused people to worry about my country's food security.

"The'rice bag' is stable and unstable, mainly due to the insufficient production and supply of the two ration varieties of rice and wheat." Tang Ke said that rice and wheat have been producing high yields for many years and the stocks are abundant. In recent years, my country's grain prices have continued to run at a low level. Under the influence of the epidemic, disaster situation and capital speculation, the prices of some varieties have resumed their upward trend in stages, but the overall prices remain basically stable.

During the New Year's Day and Spring Festival, urban and rural residents will not be short of food or oil.

"This year's grain production situation is good. The annual grain area reached 1.752 billion mu, an increase of 10.56 million mu over the previous year. This has reversed the downward trend for four consecutive years. The total output reached 1,339 billion catties, an increase of 11.3 billion catties over the previous year. It has remained above 1300 billion jin in 6 years." Chen Youquan, first-level inspector of the Planting Management Department of the Ministry of Agriculture and Rural Affairs introduced.

"The national per capita grain has reached about 480 kg, which is higher than the 400 kg international food security standard." Chen Youquan pointed out that although corn production remained flat and slightly decreased, coupled with all aspects of inventory, supply and demand were basically stable.

Therefore, "the ration is absolutely safe and the grain is basically self-sufficient" is guaranteed.

"Since mid-to-late November, with the increase in the number of corn on the market, the price has loosened and the price has gradually stabilized." Tang Ke said that this year's corn is still a good harvest year, and farmers' income from growing grain will increase after the price rises. It is expected to develop corn next year. The enthusiasm for production will also increase, and it is unlikely that corn prices will continue to rise sharply.