China-Singapore Jingwei Client, December 17th (Dong Wenbo) Recently, Hunan and other places have attracted much attention due to power outages. On December 14, according to the official website of the Changsha Municipal Development and Reform Commission, according to the notice of the Hunan Provincial Development and Reform Commission, starting from December 8, 2020, the province will start orde 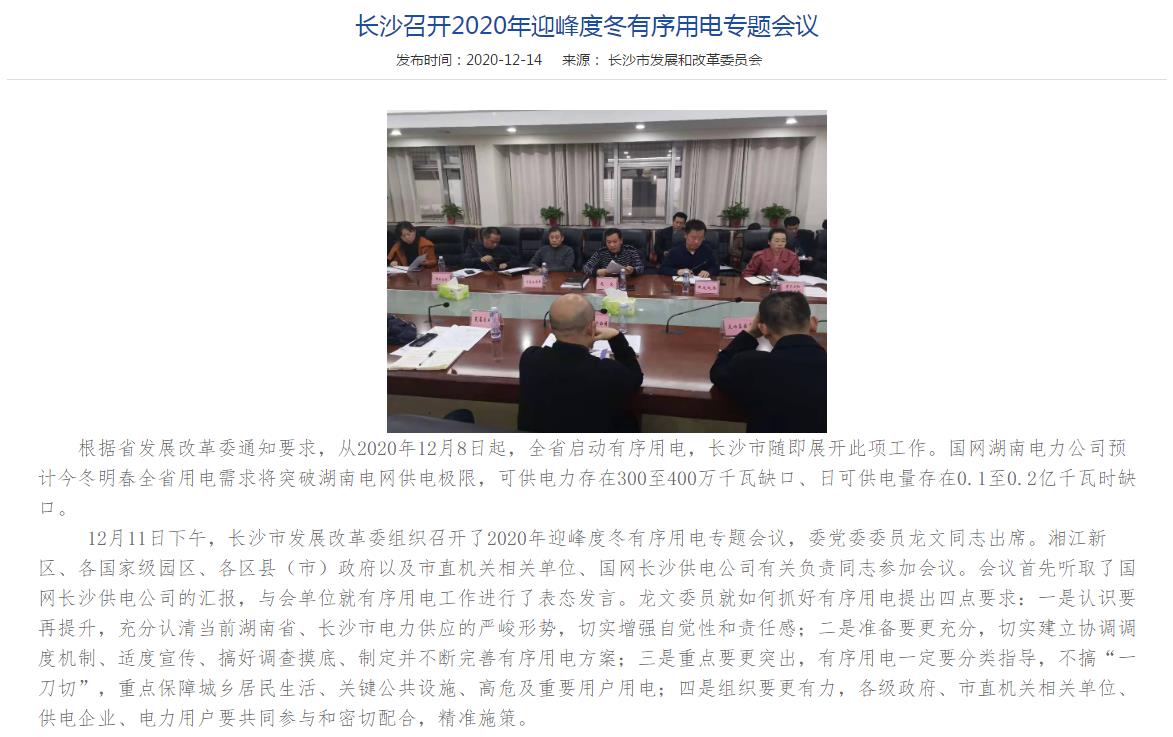 China-Singapore Jingwei Client, December 17th (Dong Wenbo) Recently, Hunan and other places have attracted much attention due to power outages.

For the orderly use of electricity, the Changsha Municipal Development and Reform Commission puts forward four requirements: First, fully recognize the current severe situation of power supply in Hunan Province and Changsha City; second, effectively establish a coordinated dispatch mechanism, appropriate publicity, conduct investigations, formulate and continue Improve the orderly electricity use plan; third, orderly electricity use must be categorized and guided, not to implement “one size fits all”, and focus on ensuring the life of urban and rural residents, key public facilities, and high-risk and important users; fourth, all levels of government and municipal agencies Units, power supply companies, and power users must participate and cooperate closely to implement precise policies.

Regardless of normal weather or extreme weather in Hunan Province this winter, there is a gap in power supply.

The company’s deputy general manager Zhang Xiaojun said, “Due to the comprehensive impact of all aspects, our province’s existing power supply installed capacity may not be able to achieve full-load power generation this winter.” Zhang Xiaojun said that on November 30, the province’s electricity coal inventory fell by 18.5% year-on-year. Regional coal supply is tight, transportation capacity during Spring Festival is limited, and the situation of coal storage and transportation in Hunan Province is not optimistic, which may have a negative impact on the power generation of thermal power companies.

It is worth noting that extreme weather also poses a challenge to power supply.

The Disaster Prevention and Mitigation Center of the State Grid Hunan Electric Power Company predicts that combining polar vortex, subtropical high, sea temperature, temperature, precipitation and other key influencing factors, the Hunan power grid is likely to experience moderate to severe icing this winter and next spring. The high-altitude areas of central Hunan, western Hunan, and southern Hunan have severe icing, and some alpine mountainous areas and local micro-topography areas such as mountains, tuyere, and pass have severe or more icing.

Residents: "There is indeed a curtailment"

What are the requirements for local residents?

At the same time, the Changsha Municipal Development and Reform Commission proposes that all air conditioners in the city should be controlled below 20°C, and high energy-consuming appliances such as electric stoves and electric ovens should not be used.

Mr. Yang, who works in the Chentai Science and Technology Park in Changsha City, told a reporter from China-Singapore Jingwei that the park had no electricity for a full day the day before yesterday (15th), and the power rationing began yesterday (16th).

Another citizen who lives in Loudi, Hunan, told the China-Singapore Jingwei reporter that the neighborhood committee forwarded a text message from State Grid Hunan Electric Power Company to the owner group, stating that the power gap in Loudi City reached 20%, and some transformers had been seriously overloaded. December 14 Since Loudi has begun to implement power cuts and restrictions on some areas and power users.

It is recommended that residents take the initiative to save electricity: during the peak hours of electricity consumption at 10:00-12:00 and 17:00-21:00 at night, do not use high-power electric appliances such as electric grills and air conditioners at the same time. Adjust the electric fire table to level 2 and below, set the air-conditioning temperature below 20 degrees, and try not to use electric water heaters.

A reporter from China-Singapore Jingwei called the State Grid Loudi Power Supply Company. The customer service said that during this period of time, the whole (Hunan) province was short of electricity, and many places had power cuts. Many lines in Loudi also had power cuts.

Regarding the policy of power cuts and restrictions, first of all, it is aimed at industrial electricity and production electricity. If the two cannot solve the problem, it may involve the electricity consumption of residents. This is the second phase of the policy.