Who said that the GDP of the entire northern region has fallen behind? The development potential of these cities is "leveraged"

Who said that the North's GDP fell? These places are promising!   China-Singapore Jingwei Client, December 9th (Wu Xiaowei and Zhang Meng) The three quarterly economic reports of each city have been released. I heard that the "Great Southern Era" is coming, and the North has been completely defeated? Don't panic, the Sino-Singapore Jingwei client is also here to take a look at the development p 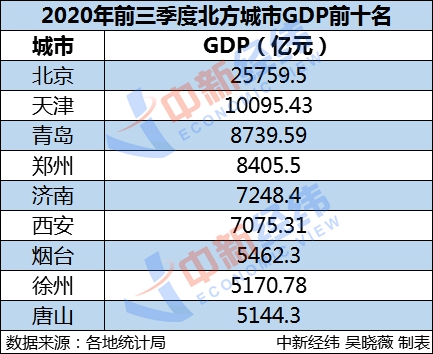 Who said that the North's GDP fell?

These places are promising!

China-Singapore Jingwei Client, December 9th (Wu Xiaowei and Zhang Meng) The three quarterly economic reports of each city have been released. I heard that the "Great Southern Era" is coming, and the North has been completely defeated?

Don't panic, the Sino-Singapore Jingwei client is also here to take a look at the development potential of these northern cities.

Lost in the North?

Recently, an article titled "The Fall of the North!

"The article pointed out sharply, "By the end of the third quarter of 2020, there is only one city in the north of China's top ten GDP." "The pattern of China's strong south and weak north has basically taken shape."

According to the analysis, the top ten cities in the country's GDP ranking in the first three quarters were Shanghai, Beijing, Shenzhen, Chongqing, Guangzhou, Suzhou, Chengdu, Hangzhou, Nanjing, and Wuhan. Among them, the northern city was only Beijing.

In this case, is the North really defeated across the board as the text says?

From the perspective of GDP, the top ten northern cities in GDP in the first three quarters were Beijing, Tianjin, Qingdao, Zhengzhou, Jinan, Xi'an, Yantai, Xuzhou, Tangshan and Dalian.

The growth rate of Xi'an reached 4.5%, ranking first among the top 50 cities in the country by GDP.

The Tibet Autonomous Region's GDP reached 130.832 billion yuan, a year-on-year increase of 6.3%, and the growth rate ranked first among 31 provinces.

From the perspective of GDP growth in the first half of the year, Tibet and Xinjiang performed well, while Gansu, Ningxia, and Qinghai all showed positive growth.

In addition, the top four in the GDP of northern cities in the first three quarters have successfully joined the "Trillion Club" in 2019.

Jinan and Xi'an followed closely with a breakthrough of 900 billion yuan, and they have properly become the reserve army of the trillion club.

According to statistics from the 21st Century Business Herald, in 2019, among the 12 small and medium-sized cities (prefecture-level cities) with a population of less than 3 million across the country, the per capita GDP of Karamay ranked first with 214,400 yuan.

"Don't compare blindly." Pan Helin, executive dean and professor of the Institute of Digital Economy, Zhongnan University of Economics and Law, pointed out in an interview with the Sino-Singapore Jingwei client that there is not only a GDP dimension between cities, but each city must integrate its own resources. Make a good article.

These cities are favored

In fact, northern cities have achieved fruitful results in many fields. For example, in 2019, the region with the highest per capita disposable income in the country is in Xicheng District, Beijing; Xi’an, which has the highest proportion of high-tech enterprises in the provincial capital, reaches 84%, and Changchun exceeds 70%. , Harbin and Taiyuan over 60%, Lanzhou over 50%; Zhengzhou has two 500 billion-level industrial clusters of electronic information, automobile and equipment manufacturing.

Sino-Singapore Jingwei Client noticed that in addition to Beijing and Tianjin, in recent years, the two northern cities of Zhengzhou and Xi'an have been positioned as national central cities.

Ding Changfa, an associate professor in the Department of Economics of Xiamen University, said that compared with coastal areas, capital cities in the central and western regions have a higher priority not only in terms of GDP, but also in terms of science, education and cultural resources. For example, universities in Shaanxi Province are mainly concentrated in Xi'an.

From the perspective of scientific research, in 2019, Beijing was the only city with a R&D investment exceeding 200 billion yuan, and the number of national high-tech enterprises also ranked first in the country.

Although Xi’an’s R&D expenditure is only 48.176 billion yuan, the scale of research and experimental development (R&D) accounts for 5.2% of GDP, second only to Beijing’s 6.31%. The scientific and technological strength and core competitiveness cannot be underestimated.

From the perspective of enterprise development, according to the WeChat account data of "Xi'an Release", among the top 20 newly-added start-up cities, Xi'an is firmly in the first echelon, reaching about 2 million.

Judging from the 2017-2019 compound growth rate of the moved-in companies, Jinan and Xi'an are the only cities with positive growth rates, 31.2% and 11.7% respectively.

It is worth mentioning that Urumqi and Yili, both of which are northern cities, are ranked 5th and 14th respectively on the list.

From the perspective of industrial advantages, as an Internet celebrity city, Xi'an has entered the first square of the national cultural and tourism industry.

"Xi'an, Zhengzhou and other places have many historical and cultural monuments, which is a bright spot." Su Jian, director of the National Economic Research Center of Peking University, said to the Sino-Singapore Jingwei Client.

According to Niu Kai, director of the Xi'an National Civil Aerospace Industry Base Management Committee, Xi'an is also the only city in China that has a complete industrial chain of aerospace systems.

Zhengzhou City Mayor Wang Xinwei pointed out that Zhengzhou has two 500 billion-level industrial clusters in electronic information, automobile and equipment manufacturing. The output of smart phones accounts for about one-seventh of the country, quick-frozen food accounts for 60% of the country's share, and the sales of passenger cars account for approximately one-seventh of the world. 1. The 2-hour flight circle of Zhengzhou Airport covers more than 90% of the population and market across the country.

Professor Geng Mingzhai, Honorary Dean of the School of Economics of Henan University, said that Zhengzhou is the largest transportation hub in the entire northern inland region and has the most extensive hinterland, which will drive the continuous, large-scale aggregation of factors and the expansion of the city.

In Su Jian's view, Urumqi also has development potential, and the "Belt and Road" initiative may benefit it.

How can northern cities work hard?

So, what aspects of northern cities need to develop?

Su Jian pointed out that "the most critical thing is the business environment."

At the same time, do more solid work to consolidate existing resources.

However, he also mentioned that satisfying the happiness of the people is the most important goal.

"Compared with yourself, and then compared with similar cities, but also to see the direction of urban development. I think that satisfying people's happiness is what a city needs to work hard to do." Pan Helin said.