Live-cargo chaotic investigation: Who is fishing in troubled waters?

Chinanews Client Beijing, November 19 (Reporter Wu Tao) "It is said that Party A is the father, but in the live streaming industry, the anchor and the MCN (new Internet celebrity economic operation model) organization are the fathers. Grandson is not even considered."   "Wang Han's live broadcast overturned", "Li Xueqin's live broadcast was exposed to scrap", "Simba was suspected of selling fak 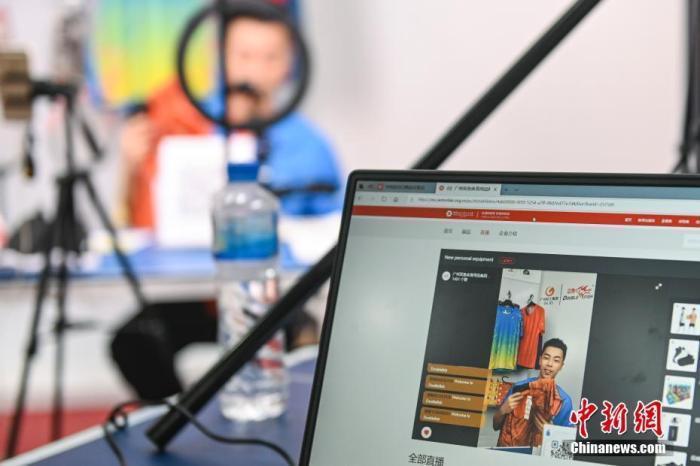 Chinanews Client Beijing, November 19 (Reporter Wu Tao) "It is said that Party A is the father, but in the live streaming industry, the anchor and the MCN (new Internet celebrity economic operation model) organization are the fathers. Grandson is not even considered."

"Wang Han's live broadcast overturned", "Li Xueqin's live broadcast was exposed to scrap", "Simba was suspected of selling fake bird's nests"... Recently, the contradiction between live broadcast anchors and merchants has become more prominent: on the one hand, live broadcast sales continue To create a new high, the anchor buys a luxury car and mansion; on the other hand, the merchants continue to shout wronged and cheated, and the 99% refund rate continues.

So, who is catching fish in troubled waters during the live streaming feast?

"Double 11" tore off the "underwear

But some companies are desperate and happily preparing to live broadcast the goods, but dejectedly embarked on the road of rights protection.

Recently, a merchant posted to Moments that on November 6, the company’s store participated in a live broadcast by the artist Wang Han under the Galaxy Stars Broadcasting Agency. The starting fee was 100,000 yuan. 1,323 units were sold on the same day, and 1,012 units were refunded. The refund rate was 76.4. %.

During the live broadcast, due to a large number of refund orders from multiple units, the platform was also warned of false transactions.

It’s not just the host Wang Han who brought the goods in the live broadcast. Simba, the master in the live broadcast, has recently been questioned as a fake bird’s nest, which looks like water; this year’s popular talk show actor Li Xueqin was exposed on a certain platform on “Double 11” There were 3.11 million live viewers and the real data was less than 110,000.

In fact, not only celebrities, but some "not bad money" bigwigs will confuse the sales figures by arranging their products on live broadcasts.

For example, some media pointed out that Gree's official WeChat account showed on June 19 that Dong Mingzhu’s cumulative sales of 5 live broadcasts had exceeded 17.8 billion yuan.

Regarding the many controversies caused by live streaming during the "Double 11" period, Simba chose to recover from illness; Li Xueqin participated in events one after another, the latest one was attending an event in Didi; Wang Han did not respond positively, and he participated in the show "Debut Up!

"Dunhuang" will be broadcast.

The parties seem to have nothing happened.

Yinhe Zhongxing said, "This is fake." The company does not have any fictitious data or purchase traffic. It only helps the e-commerce platform account to perform a live broadcast, and there is no need to brush orders.

Is it really unnecessary?

In the opinion of some people in the industry, if a celebrity is broadcast live with a few people watching it, and the input and output are seriously disproportionate, I believe that no one will pay for him or her next time.

According to a reporter from Chinanews.com, nowadays, celebrity live broadcasts generally have pit fees, ranging from tens of thousands to hundreds of thousands.

According to the data disclosed by media reports, Wang Han’s live broadcast mentioned above, and the business who exposed the material paid a pit fee of 100,000 yuan (starting broadcast fee).

Screenshot of a self-service ordering platform.

Some industry insiders pointed out that some MCN agencies or anchors will deliberately create sales and create a feeling of "very good to bring goods", and then they will ask for money, and some even specialize in "killing young business."

"This is a business that makes a steady profit without losing money." For example, if the pit fee is 100,000 yuan, if there are 10 live broadcast brands, no matter how the product is sold, the total pit fee is 1 million yuan.

At the same time, the cost of billing is extremely low, and anchors or MCN agencies can achieve “guaranteed income from drought and flood”.

A reporter from China News Network found that for only 70 yuan, you can swipe 100 "machine fans" on the Douyin live broadcast to watch the data, and the viewing time is up to 2 hours; in the Taobao live broadcast, you can buy 10,000 for 120 yuan. A machine fan watching the data.

All price packages are available.

A quotation sheet (part of) provided by a certain brushing supplier.

According to media exposure, in Li Xueqin's above-mentioned live broadcast, most of the comments made by "fans" who interacted with Li Xueqin in the comment area were made by machines.

Why does Party A still want to live broadcast the goods, is it

It is not difficult to find that in order to reap the dividends of live streaming, some anchors and MCN agencies are doing everything, but the problem is coming?

Is the merchant so stupid, willing to be a lamb to be slaughtered?

Chen Yuan (a pseudonym), the person in charge of live delivery of a jewelry chain brand, told a reporter from Chinanews.com that during the epidemic, their brand offline physical stores were greatly affected. The company closed almost 20% of its stores, nothing else. The only way out is to hit the line.

"Why did you choose live streaming? Because the first half of this year, including Taobao live broadcast, gave a lot of free traffic. And if you open an online store, the traffic on Taobao is very expensive, and it can't be played according to the development model of ordinary advertising. Start. Free traffic is an opportunity."

A promotional video for users to upload on the Xiaohongshu platform.

But with the development of live streaming, the platform's traffic strategy is also changing.

"Taobao live broadcast traffic is concentrated on the head, and Douyin is more about supporting waist anchors or even amateur live broadcasts, and head anchors are not allowed to control the traffic all the time." Chen Yuan said.

This is why some Internet celebrities burst into "Oumaika" in the last live broadcast, and "Karma" in the next one.

This is related to the impact of different strategies on live broadcast platforms.

"The company has this budget. It turns out that the annual rent for offline physical stores ranges from hundreds of thousands to millions of yuan. After the store is closed, the money is saved." Chen Yuan said that the company is in the experimental stage anyway, or Said this is a kind of "people following the crowd" mentality. You are walking down the street and it is difficult to control your gaze when everyone else is looking up at the sky.

The revenue model of live streaming with goods may change

Can the false prosperity supported by single-handling last long?

The answer is obviously no.

The reporter noted that at present, some businesses have requested MCN agencies or anchors to cooperate in a rake mode, that is, the rake is based on how much goods are sold.

Screenshots of reports released by KPMG and Ali Research Institute.

A report jointly issued by KPMG and Alibaba Research Institute pointed out that due to factors such as the popularity of the live broadcast format and the relatively low barriers to entry, negative news such as anchor false propaganda and live broadcast data falsification have repeatedly appeared in recent years, which invisibly consumes consumer trust. .

The live streaming industry has also been exploring other revenue models.

Zhang Chaoyang, Chairman and CEO of Sohu’s Board of Directors, said recently, “We have transformed live broadcasts into live variety shows for new marketing activities. These attracted the attention of advertisers, which led to an 8% growth in brand advertising in the third quarter. "

Screenshot of the official website of the National Cyberspace Administration of China.

Moreover, strict supervision is approaching. On November 13, the State Internet Information Office publicly solicits opinions on the "Regulations on the Management of Internet Live Marketing Information Content Services (Draft for Comment)". It is proposed to stipulate that live broadcast room operators and live broadcast marketers shall not publish false Information deceives and misleads users; it is not allowed to fabricate or falsify data traffic such as attention, page views, likes, and transactions.

Have you participated in live shopping, what do you think about the chaotic situation of live streaming?