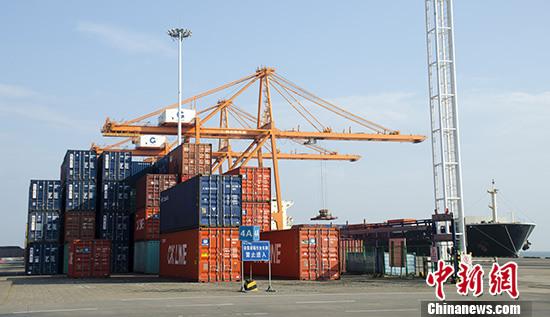 Data map: A freighter berths at the container terminal in the Qinzhou Free Trade Port Area in Guangxi.

According to the agreement, after the RCEP takes effect, more than 90% of the goods trade in the region will eventually achieve zero tariffs, and the tax will be reduced to zero immediately and to zero within 10 years.

Zhang Jianping, director of the Regional Economic Cooperation Center of the Institute of International Trade and Economic Cooperation of the Ministry of Commerce, said in an interview with a reporter from China News Agency that the zero-tariff ratio of goods trade in large-scale free trade agreements can reach 85%, which is a high level.

Taking into account the huge gap in the economic development level and scale of the 15 RCEP member countries, it is "hard-won" that the zero-tariff ratio of goods trade can reach more than 90%.

"More than 90% is a fairly high level, indicating that the parties to the RCEP are ambitious about the quality of the agreement." said Gao Lingyun, a researcher at the Institute of World Economics and Politics, Chinese Academy of Social Sciences.

The head of the International Department of the Ministry of Commerce of China stated that with the implementation of uniform rules such as rules of origin, customs procedures, inspection and quarantine, and technical standards, the elimination of the superposition of tariff and non-tariff barriers will gradually release the trade creation effect of RCEP and significantly reduce the regional Trade costs and product prices enhance the competitiveness of products in the region, benefiting all companies and consumers.

The person in charge of the International Department of the Ministry of Commerce stated that in terms of openness, all 15 parties have made openness commitments higher than their respective "10+1" free trade agreements.

China’s service trade opening commitment has reached the highest level of existing free trade agreements. The number of service departments promised is based on the approximately 100 departments promised by China’s accession to the WTO. 22 new services including R&D, management consulting, manufacturing-related services, and air transportation have been added. Departments, and increased the level of commitments in 37 departments including finance, law, construction, and shipping.

In recent years, service trade has become the most dynamic part of global trade, playing an increasingly important role in economic and trade development.

According to this principle, according to the rules of origin of the previous bilateral free trade agreements between members, it cannot be counted as a product of a certain country's origin. After the accumulation of regional value, it may be recognized as RCEP regional origin and enjoy RCEP preferential tariffs.

In terms of investment, the 15 member states of RCEP have adopted a negative list approach to make high-level openness commitments for investment in the five non-service sectors of manufacturing, agriculture, forestry, fishery, and mining.

The parties agreed to discuss an investment dispute settlement mechanism between investors and countries within two years after the RCEP agreement came into effect.

Zhao Jinping, former director of the Foreign Economic Research Department of the Development Research Center of the State Council of China, said that investment is the driving force behind the adjustment of the industrial chain and supply chain.

With the expansion of enterprise investment, production will inevitably accelerate the layout of the region, which will further increase the regional logistics demand.