"Second Brother" made meritorious service, CPI fell below "1" after 42 months

Chinanews client, Beijing, November 10th (Reporter Xie Yiguan) "Second Brother" has been declining, and prices have been on the slide in recent months!   Data released by the National Bureau of Statistics on the 10th showed that in October, the national consumer price (CPI) rose by 0.5% year-on-year, and fell below 1% again after 42 months. CPI ups and downs chart. From the National Bureau of 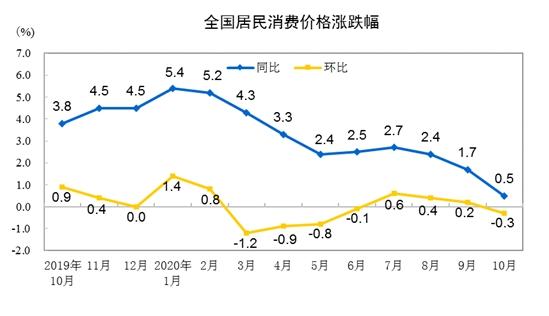 Chinanews client, Beijing, November 10th (Reporter Xie Yiguan) "Second Brother" has been declining, and prices have been on the slide in recent months!

Data released by the National Bureau of Statistics on the 10th showed that in October, the national consumer price (CPI) rose by 0.5% year-on-year, and fell below 1% again after 42 months.

According to Dong Lijuan, a senior statistician at the City Department of the National Bureau of Statistics, from a year-on-year perspective, the CPI rose by 0.5%, a drop of 1.2% from the previous month.

This is the first time that 42 months have passed since March 2017, the year-on-year increase in CPI has once again returned to below 1%.

Judging from the CPI growth chart, starting from February 2019, the year-on-year growth rate of CPI has continued to rise for several months. After reaching a high of 5.4% in January 2020, it began to decline. In June and July 2020, affected by the southern floods, there was a slight rebound. But then it fell again, falling below the "2%" and "1%" barriers one after another.

Why did the year-on-year increase drop sharply?

"This is mainly due to the high comparison base in the same period last year, the reduction in tail-lifting factors and the change in pork prices." Dong Lijuan said.

"According to estimates, of the 0.5% year-on-year increase in October, the carry-over impact of last year's price changes was about 0.4%, down 0.8% from the previous month, and the impact of the new price increase was about 0.1%." Dong Lijuan pointed out.

Pork prices are still the "heavyweight" that has accelerated the narrowing of CPI growth.

In October, pork prices fell by 2.8% year-on-year, the first decline after 19 consecutive months of rising, affecting the CPI drop by about 0.13 percentage points.

For many months, the price of pork has remained at the “C” position in the CPI increase factor.

Previously, pork prices rose by 116.0% year-on-year, pushing the CPI increase to more than 5%.

“Now the former sells 25.8 yuan a catty, which has dropped a lot. It used to sell for more than 30 yuan, and the pork belly etc. have also dropped, which is the difference between the more and the less.” Recently, at a vegetable market in Fengtai District, Beijing, The meat vendor told a reporter from Chinanews.com.

The picture shows a pork stall in a vegetable market in Fengtai District, Beijing.

The Ministry of Agriculture and Rural Affairs conducted fixed-point monitoring of fairs in 500 counties across the country. As of the fourth week of October, pork prices had fallen for eight consecutive weeks from the previous month, and they had declined year-on-year since the second week of October.

Residents who often go to buy meat may find that the price of pork does not drop again and again, and sometimes increases.

"It looks like the price has dropped now, but I don't know which day it will rise back. Maybe it will sell for 25 yuan today and it will be higher tomorrow." The meat vendor also told reporters.

“As the weather continues to turn cold later, the market’s demand for fat white strips will gradually increase. It is expected that the price of live pigs in November may fluctuate first and then rise slightly. Affected by La Nina, the southern region may accelerate into the cold winter in December, and the activity of pickled enema will increase. , Superimpose the deep processing enterprises' stocking intentions before the Spring Festival increase, the two-way increase in market supply and demand, it is expected that the live pig market may rise to a certain extent, but the space may be relatively limited." Wang Lingyun, a pig industry analyst at Zhuochuang Information pointed out.

However, in the long run, pork prices may maintain a downward trend and are expected to return to normal levels in previous years.

"In the coming period, the pork supply situation will get better and better, and we are confident that we can achieve the goal of recovering the annual pig production capacity to near normal levels." Chen Guanghua, deputy director of the Animal Husbandry and Veterinary Bureau of the Ministry of Agriculture and Rural Affairs, said that pork supply will be available during the Spring Festival on New Year's Day next year. It will increase by about 30% year-on-year, and the price will generally be lower than the level of the same period last year, and there will be no more substantial price increases.

Zhu Zengyong, an associate researcher at the Beijing Institute of Animal Husbandry and Veterinary Medicine, Chinese Academy of Agricultural Sciences, said that in 2021, the price of pigs will show a trend of high and low, and the high will appear before the Spring Festival, and will gradually approach the normal price level in the second half of the year.

Will CPI continue to decline in the future?

"The CPI continued to decline in November, and the overall downward trend in pork prices remained unchanged. Vegetable prices will continue to fall as the peak trading season arrives, and prices of fruits and aquatic products will continue to decline due to seasonal influences," said Xu Dongshi, a macro analyst at Galaxy Securities. The impact of the CPI carry-over in November was about 0.4%, and the carry-over declined. The CPI increase in the fourth quarter is expected to be around 0.6%.

"Because this time last year happened to be a period of rapid increase in pork prices, so affected by the high base, it is expected that the CPI increase will be at a relatively low level until the first quarter of next year, and it may slowly rise afterwards." Bank of Communications Financial Research Center Senior researcher Liu Xuezhi told reporters.

"On the whole, the CPI has increased by 3% year-on-year in the first 10 months, and has fallen back to the 3.5% annual control target." Wen Bin, chief researcher of Minsheng Bank, pointed out that in the next stage, as the CPI base continued to rise in the same period last year, pork When food supply continues to recover, supply and demand are expected to remain balanced, and the CPI center will continue to fall.

As prices continue to fall, many people worry about deflation.

Liu Xuezhi believes that “the core CPI has been at 0.5% in recent months, and inflation as a whole is moderate, so there is no need to worry about deflation.” (End)